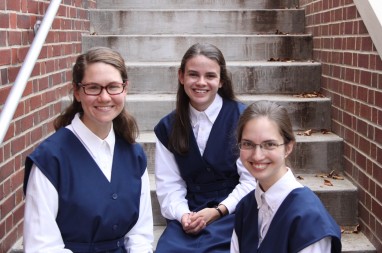 Photos provided by Sister Maria Gemmer
Three young postulants to the Sisters of St. Francis of Perpetual Adoration, Mishawaka, are pictured sitting on the stairs of the convent. The diocese has seen a recent bump in the number of local young men and women discerning vocations to religious life and the priesthood.

Currently, 29 young men and women with roots in the Diocese of Fort Wayne-South Bend have accepted their calling to do God’s work. This includes three young women who are postulants for the Sisters of St. Francis of Perpetual Adoration in Mishawaka, three young men who are in temporarily professed in the Congregation of Holy Cross and 23 young men who are in seminary studies with the diocese. “This is a great testament to their parents, of course, but also teachers and pastors who have helped these students discern the possibility of a religious vocation,” said Marsha Jordan, superintendent of schools in the Diocese of Fort Wayne-South Bend.

The Catholic schools in the diocese had a large impact on Michael Thomas, CSC, 26. After growing up as an Evangelical Christian, Thomas converted to Catholicism at the age of 19 and is currently third-year professed in the Congregation of Holy Cross. He attended St. Joseph Grade School in South Bend and St. Joseph High School.

“I have very clear memories of how my schools taught me a love for the liturgy, especially the Mass,” said Thomas. “In grade school we had weekly Mass. That’s where I learned the rosary, Stations of the Cross and about Lent.” 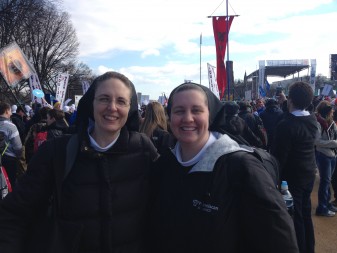 Thomas also remembers using his prayer journal in the fourth grade, which is where he first wrote that he wanted to become a missionary — something he will likely have an opportunity to do, “God-willing,” after he completes his studies and becomes a priest with the Brothers of Holy Cross.

Some of the experiences that benefited Thomas the most, as his belief in Catholicism developed, happened in his high school theology class. There he had taken the opportunity to struggle with, argue and debate the Catholic faith. As he did, his love for theology grew. He saw the beauty of the faith, and even grappled with reasoning through the mysteries.

It was also not just his theology teachers that helped him grow, however. His teachers of subjects such as economics and English were also “immensely influential,” he said.

“One of the things that I’m most grateful for is where I went to school. It gave me my life. There is no way I would be as close to my vocation at my age if I hadn’t attend the schools I did.”

Another former student of the Catholic schools in Diocese of Fort Wayne-South Bend is Alexis Lolmaugh, 20, who went to St. Matthew School and Marian High School, and spent one year at Holy Cross College, before entering the community of the Sisters of St. Francis of Perpetual Adoration.

“The support and guidance of many of our priests has helped me tremendously in my discernment, as well as the witness and teaching of both Bishop D’Arcy and Bishop Rhoades,” said Lolmaugh. “I attended many high school retreats and these helped me grow in my relationship with Christ, which strengthened my discernment.” 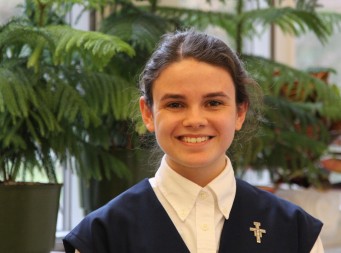 Alexis Lolmaugh’s formation as a Catholic began during her days as a student at St. Matthew School, South Bend. She is currently a religious with the Sister of St. Francis of Perpetual Adoration in Mishawaka.

While at St. Matthew, Lolmaugh had an opportunity to consistently learn and grow from the Sisters of Saint Francis of Perpetual Adoration.

“When I was in fifth grade I had Sister Gianna Marie as my religion teacher, and in sixth grade I had Sister Margaret Mary,” she recalled. “This was my first encounter with sisters, and I was amazed by their joy and charity. At that point in my life, the thought of being a sister was already in my mind; but their example made my desire to become a sister even stronger.”

After her early experiences with the Sisters of Saint Francis of Perpetual Adoration, Lolmaugh visited the convent many times. As her spiritual life grew she “fell in love” with the sisters and decided that she wanted to be a member of their community.

Beyond the classroom and discernment retreats, there are many other opportunities available for adolescent and young adult members of the diocese to discern and learn about religious vocations.

Father Andrew Budzinski, director of the Office of Vocations in the Diocese of Fort Wayne-South Bend, said one such opportunity for adolescents in the diocese are the Melchizedek Projects, which are vocations discernment groups for like-minded men who love Jesus. There are several groups, in Fort Wayne, South Bend and Elkhart.

Young women have opportunities for discernment as well.

“We also take time to visit grade schools, high schools, and parish youth groups,” said Sister Maria Gemma, OSF, who works with Sister Lois, OSF, in the Vocations Office of the Sisters of Saint Francis of Perpetual Adoration in Mishawaka. “A new initiative at our Motherhouse this year is the “Chiara Club” inviting middle school aged girls to come for one afternoon every two weeks to spend time with the sisters doing an activity and joining them in prayer.”

The two vocation leaders believe that a large number of young men and women will continue to accept their calling to serve God.

“Many young women are seeking to consecrate their lives to the Lord,” said Sister Maria Gemma. “As long as the young people are continually being led closer to the Lord and in love with Jesus Christ, how could it not continue? If someone is available to his grace and opens their heart He will speak to them!”