Friday, June 24, 2022 – a day that will forever be remembered as a triumph for the unborn and for defenders of life.

On that day, the Unites States Supreme Court sent shockwaves across America by overturning Roe v. Wade, effectively ruling that abortion is not a constitutional right. The reversal came as a result of the decision in the Dobbs v. Jackson Women’s Health Organization case and gives the power to restrict or ban abortion back to the states. It also ends nearly 50 years of constitutional protection for abortion, in which more than 63 million unborn lives were lost. 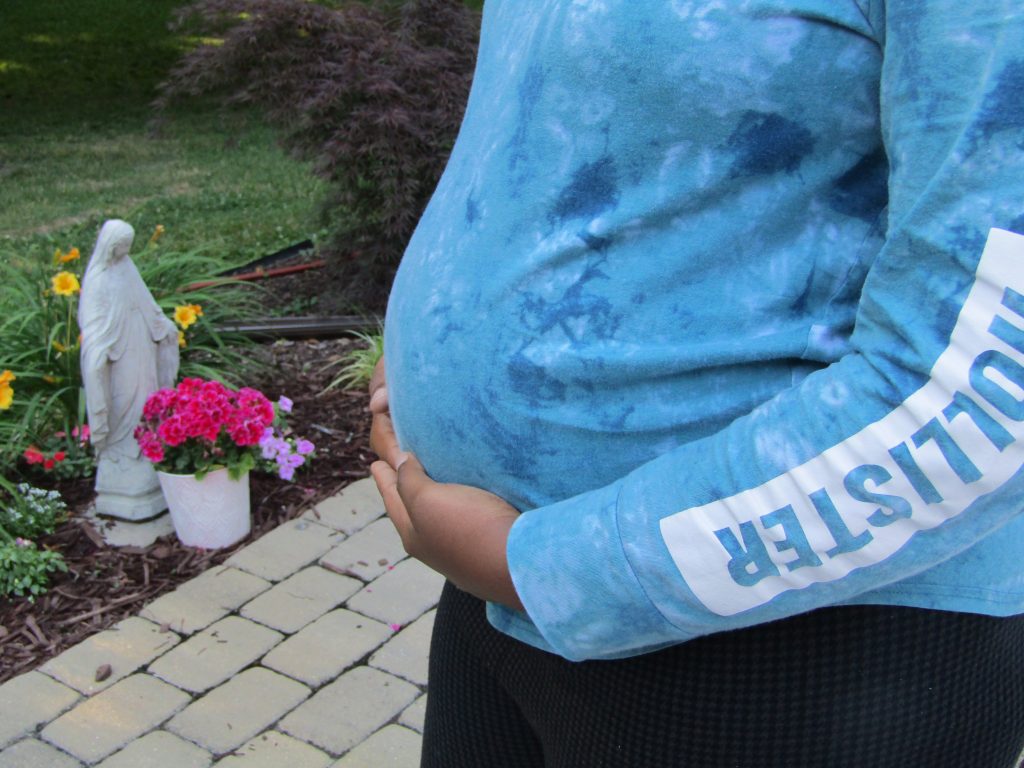 Photos by Eric Peat
An expectant mother living at A Mother’s Hope in Fort Wayne proudly displays her baby bump.

The aftershock is still being felt within the Diocese of Fort Wayne-South Bend, where pro-life organizations are celebrating the victory and bracing for the next stage in the battle for life. For Abigail Lorenzen, Operations and Media Director at Right to Life of Northeast Indiana, the post-Roe reality is still setting in.

“I was in absolute shock, actually,” admitted Lorenzen, who had been hopeful for a reversal of the ruling ever since the Supreme Court’s draft leak, but had felt doubt starting to creep in. “And our staff – we’re still sort of reeling from that and coming to grips with, ‘Wow, this is reality now. Roe is no longer standing, this huge, Goliath-of-a-barrier.’ It was so archaic, so unnecessary and unfounded in the Constitution, and now it’s been stripped. That was just a colossal thing to wrap my mind around. So, it’s been an incredible couple of days here.”

The enormity of the decision also hit home for Stasia Roth, Executive Director of A Mother’s Hope in Fort Wayne. 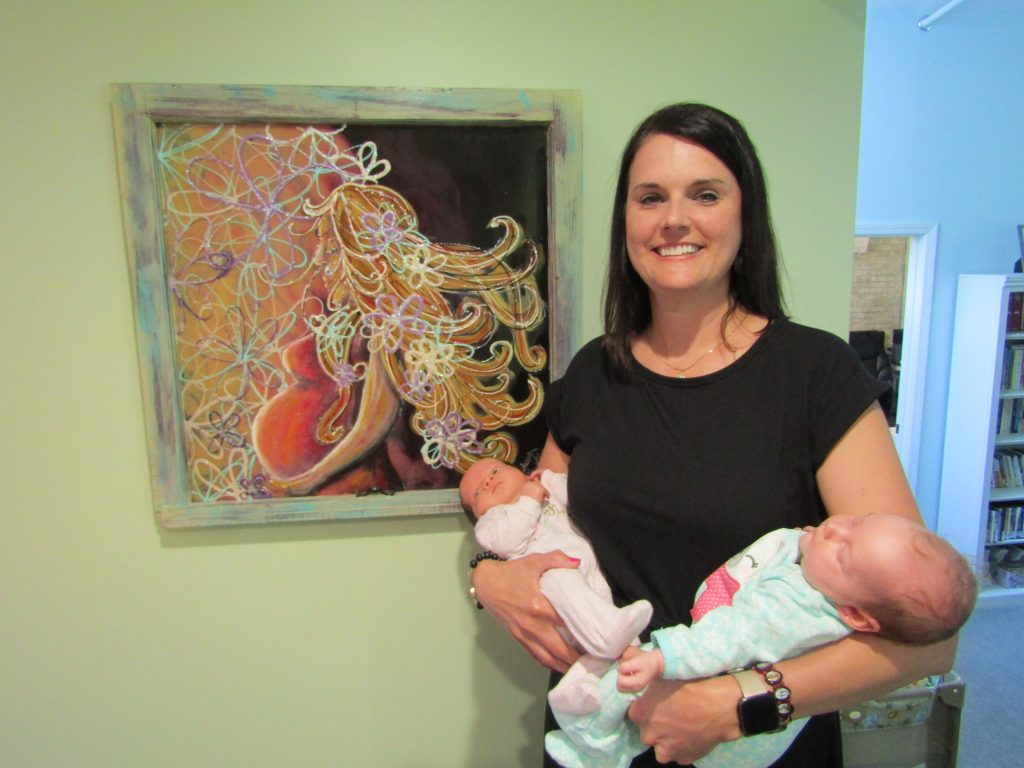 “It was definitely a drop-you-to-your-knees kind of moment,” said Roth, whose organization provides refuge for homeless, pregnant women and gives them opportunities for growth. “It felt overwhelming in a beautiful way, just thinking of all the babies’ lives that will be saved – and not only that, but all the families who won’t have to go through the destruction that abortion causes. That was just huge.”

Also huge to Roth was God’s timing of the ruling, which occurred on both the Feast of the Sacred Heart of Jesus and the traditional Nativity of St. John the Baptist, who leaped for joy at Christ in the womb. “I love it when He gives us those signs that it was Him,” said Roth.

As their collective emotions recover, pro-life organizations across the diocese are preparing for what comes next. First, said Lorenzen, is advocating for our state legislators to pass an abortion ban in their upcoming special session on July 25. She stressed that the wording of the law must be sensitive to women in crisis pregnancies. Another immediate priority for Roth is helping to educate women on the services that are available for those who want to choose life. This includes making the adoption process easier, less expensive and more appreciated in society.

“We need to talk about placing babies for adoption, not giving up babies,” explained Roth. “There’s a huge difference there when you speak to it for what it really is – it’s this incredible sacrifice that the mother is making, and that should be celebrated. She should be praised for that, not made to feel that she did something wrong or did something bad or that she didn’t love her baby.”

Dawn Kaser, Director of Advancement at Hannah’s House in Mishawaka, also expressed the desire to celebrate the positive life choices of women. Hannah’s House is a faith-based organization which offers housing and support for disadvantaged pregnant women. Kaser said that part of this support is training these women to make choices that are not rooted in fear, instability or desperation.

“We have women coming to us who are in poverty, facing homelessness, they’ve been abused, they’ve had childhood neglect, they’ve been addicted, they’ve been incarcerated and they want to keep their child and be a better human being,” said Kaser. “The next step would be creating a woman who is strong, makes better choices and puts herself in a safe and stable environment for her child and also for her future children.”

According to Lorenzen, proper education on the pro-life stance is more important now than ever before. Right to Life of Northeast Indiana offers Life Defenders Training for high school and college students, arming young people with the ability to “back up the value of human life using logic and science as the basis of that, so that they can talk to anybody who has questions about it, not just Christians and using biblical arguments.” The goal of this training and other adult workshops is to equip people to not only respond to questions about life, but also to seek out such conversations to help change the mindset in communities.

“The coin has flipped,” said Lorenzen. “It used to be that the pro-life movement was sort of on the bottom side of the coin; we were the underdogs. We were working from a disadvantage because the laws didn’t support our stance. But that has been reversed. Now that we’re on the top, people are asking us questions that we need to be able to answer.”

In order to continue such ministries, pro-life organizations rely on the help and support of volunteers and donors across the diocese. At Hannah’s House, the biggest need is always monetary donations. For A Mother’s Hope, there are countless ways to volunteer, including driving mothers to appointments, as well as donating supplies for their home, which is currently full with eight soon-to-be mothers and five babies. The organization is also exploring expansion to offer housing to women with other children.

However, Roth said the biggest need is prayer, especially for the protection of the women currently housed at A Mother’s Hope and the staff. Meanwhile, Right to Life of Northeast Indiana is looking for volunteers for its Sidewalk Advocate program, in which volunteers are trained to speak to women outside of Planned Parenthood and offer alternate agencies with similar services. Right to Life is also looking for church coordinators to help connect parishes to its events.

More than anything else, Lorenzen stressed that the inevitable conversations that arise about life must be approached with love and respect for the other side – which is what establishing a truly pro-life culture is all about.

“We’re talking with people,” reminded Lorenzen. “That’s the most important thing: we need to look at people and talk to people, not think about how to formulate the best arguments possible in that moment, and then we end up bulldozing the person who actually is standing in front of us needing love and help. Your focus is not answering the questions, your focus isn’t winning the argument – it’s winning the person.”