When the Diocesan Museum moved to Cathedral Square in Fort Wayne, the idea was to literally bring it out of the basement and increase awareness of the museum. Kathy Imler, the museum director, had not realized what a blessing the new location would be as a tool to reach non-Catholics.

“There’s lots of foot traffic and in a sense, I hadn’t had this in my mind to be such an evangelizing source, because we get lots and lots of people who aren’t Catholic,” Imler stated. Located in the heart of the city between the Botanical Conservatory, Grand Wayne Center and the Cathedral of the Immaculate Conception, people wandering around downtown often come across the museum. 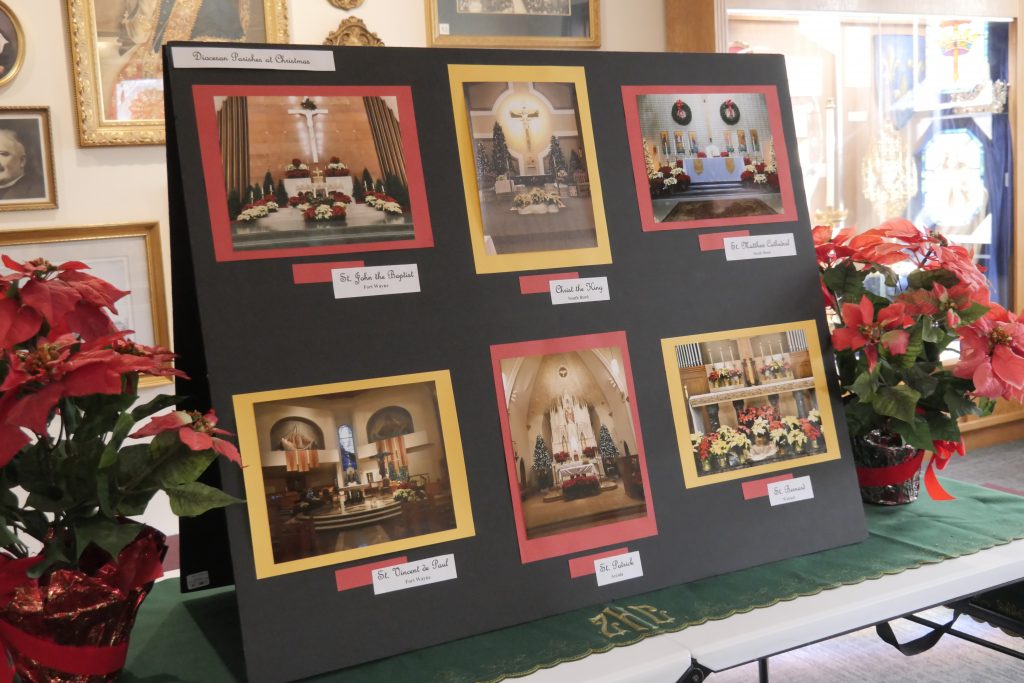 This is particularly true at Christmastime, when many people visit the displays and events going on around the city. With everything looking so festive in December, Imler decided that this year, the museum would add their own Christmas display as well. The idea came from a photograph of the Cathedral at Christmas that former director and founder of the museum, Father Phil Widmann, who passed away this March, had on his desk. Imler remarked, “I think most of my ideas are already in the museum and Fr. Phil is letting me know about them.”

So Imler decided to put together an exhibit of church altars decorated for Christmas. To do this, she had to personally contact each of the 81 parishes in the diocese, requesting photos of their altars at Christmastime. Thirty-five of the parishes responded with photos. Imler took time to collect these and arrange them on display boards in multiple locations throughout the museum. Several of the photos she received were from cell phones, so she had to find a workaround to increase the quality of the photos for printing. 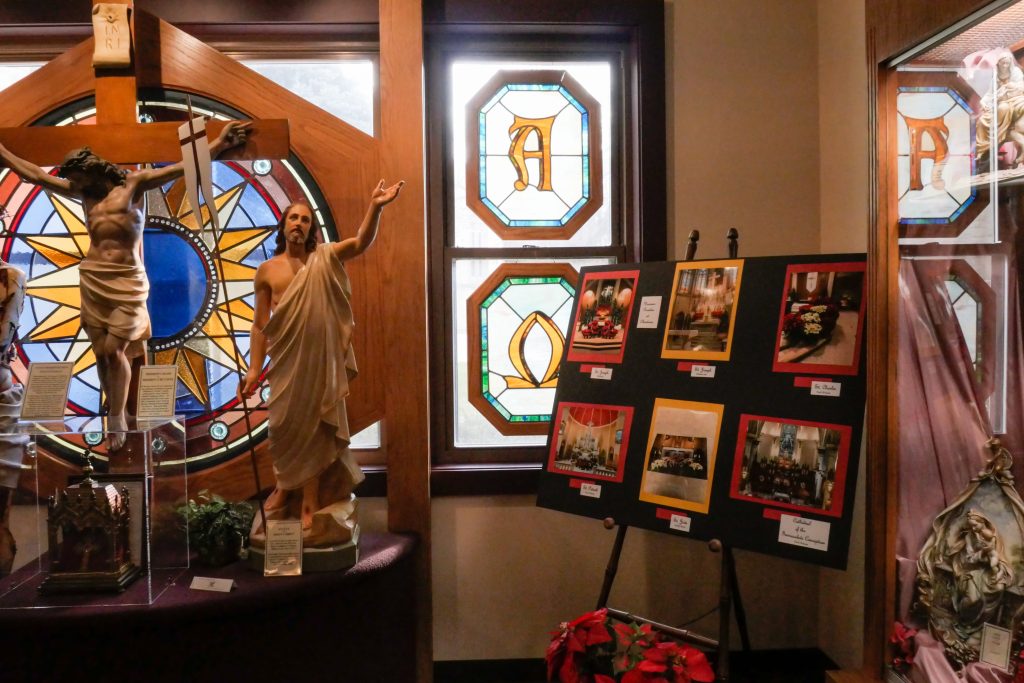 Several of these display boards are organized around the museum, with over 30 churches featured in the exhibit.

Not only does this bring a bit of Christmas spirit to the museum, but it allows Catholics who have not been able to visit other churches to get a glimpse of the incredible variety of church styles throughout the diocese. The display offers an opportunity for the museum to become more diocesan by highlighting its different churches. Imler is a parishioner at St. Peter in Fort Wayne, and it has been interesting for her to see what other parishes look like and how they decorate for Christmas. She even has a few photos of church nativity scenes, and the variety in those is also astonishing.

“I’ve been very happy that as many came in as have,” she said. Oftentimes, churches go through renovations and staff members are very busy this time of year, “So I’m hoping that maybe every year we can add to the collection.” 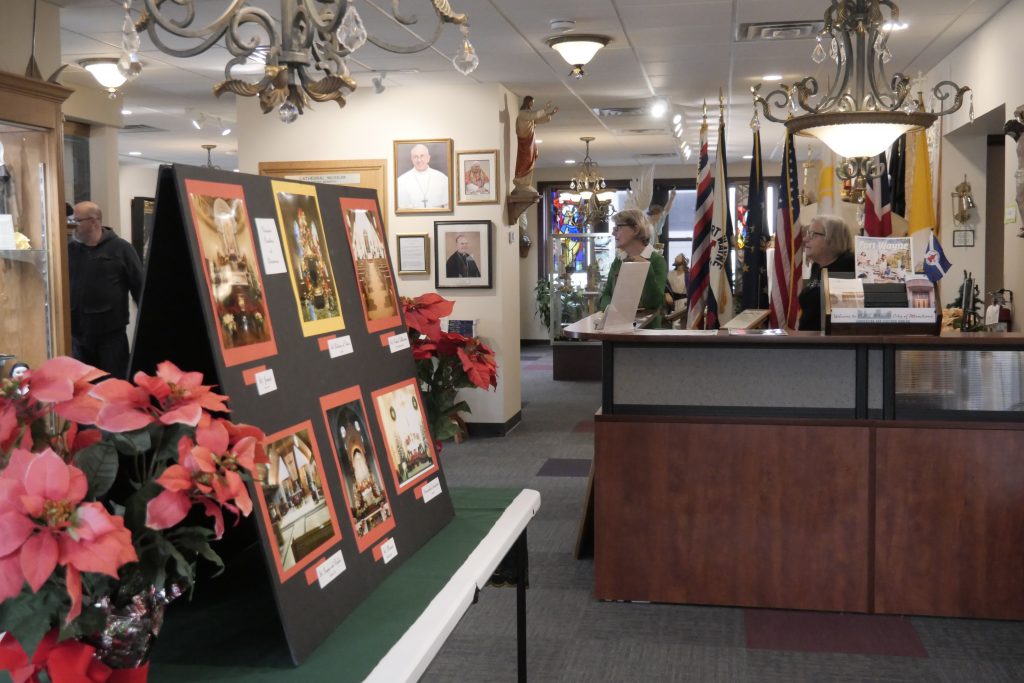 Photos by Jennifer Barton
Photos of churches throughout the Diocese of Fort Wayne-South Bend decorated for Christmas are currently on display at the Diocesan Museum in Fort Wayne, located next to the Cathedral of the Immaculate Conception.

Imler is also looking into the future well beyond next year’s Christmas displays. She has what she calls her “five-year plan,” a set of goals to further the museum’s potential. “It may be longer than that, but that’s what I’m calling it because it sounds doable,” she said. The first floor of the museum is basically finished, with two rooms that Father Widmann had planned prior to his passing seeing completion months ago. The second floor, however, needs extensive work and a designated purpose. It is currently housing articles that require sorting and cataloguing, as well as deciding whether the diocese should keep them or pass them on to others who could use them in missionary fields.

A larger part of her renovation goal is to determine whether the former chancery building can become a self-sustaining, green initiative for the diocese. Imler would like to work with an architect to look at possible solar power and increased energy efficiency. “So I’m just at the start of that and it’s kind of an exciting thing for me. I just finished one of the displays on Laudato Si’, and so reading a lot about that encouraged me to think along those lines.”

Because of the variety of people who come into the museum, Imler has had to rethink the way that some of the information on the displays was written, to better give non-Catholics a sense of what Catholicism really means: “to include if you weren’t Catholic at all, had no background, what kind of information would you like to have. So that’s kind of fun.”

The Diocesan Museum is open five days a week, Tuesday through Saturday from 10 a.m. to 2 p.m. and hosts numerous items relating to the history of the Catholic Church, and particularly the Diocese of Fort Wayne-South Bend. 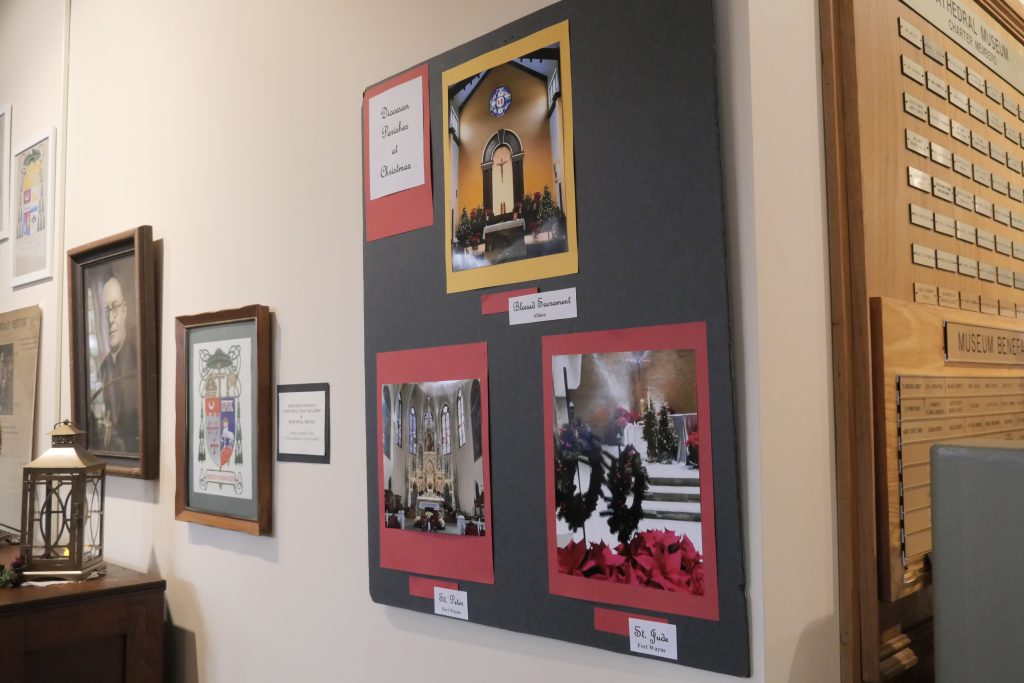 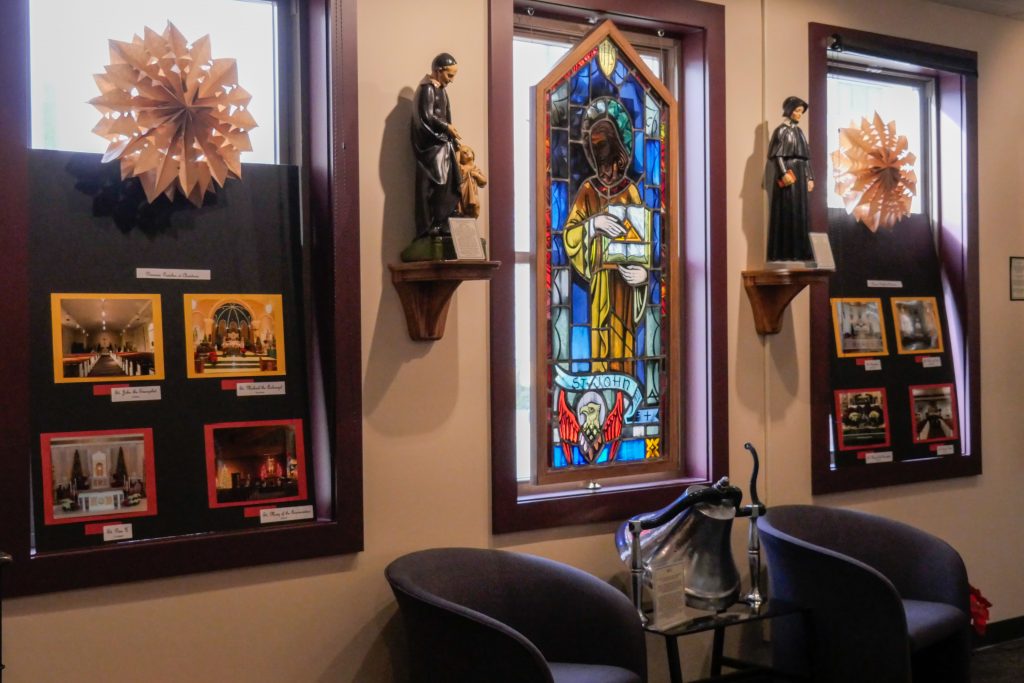