History of diocese, Catholic faith to be shared from new location

Click here for more photos from the reopened Diocesan Museum.

The museum of the Diocese of Fort Wayne-South Bend soon will preserve and share history from its most visible and accessible location yet.

A grand opening celebration will take place March 12 at 10 a.m. at the new location of Diocesan Museum, the ground floor of the former chancery located at 1103 S. Calhoun St. on Cathedral Square in downtown Fort Wayne. 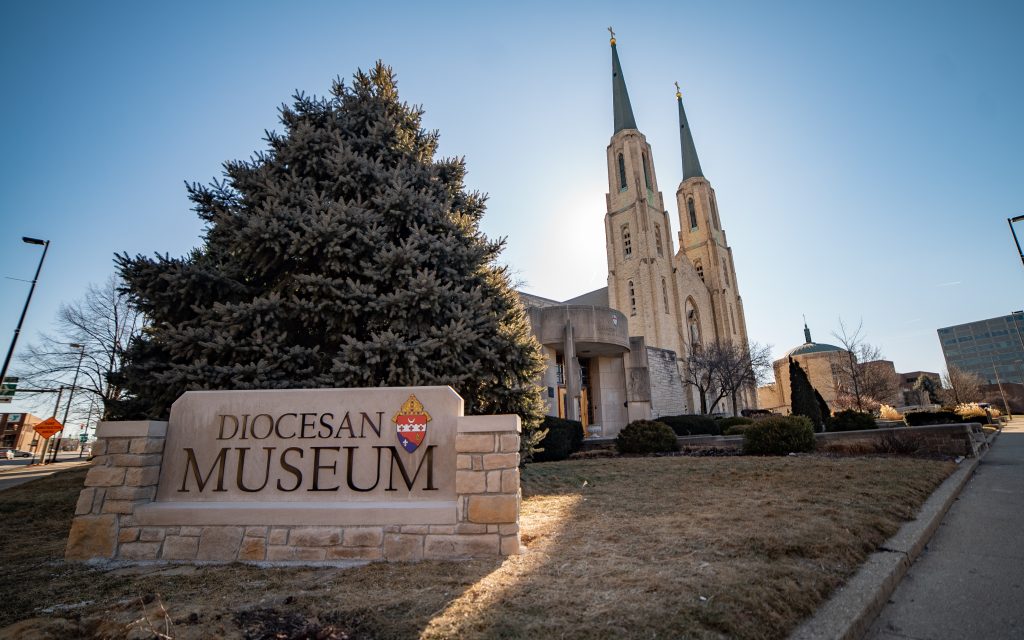 The new location has a large outdoor sign and stands less than a block from visitor destinations such as the Grand Wayne Convention Center, Foellinger-Freimann Botanical Conservatory and Embassy Theatre.

Regular operating hours will be 10 a.m.-2 p.m. Tuesday through Saturday, and by appointment. Admission is free.

For many years, the museum — formerly known as Cathedral Museum — has operated in a basement location, at St. Mother Theodore Guérin Chapel next to the Cathedral of the Immaculate Conception and, most recently, in the Archbishop Noll Catholic Center.

The move to the new building revives use of the former chancery, which had been mostly vacant for several years. The larger space allows the museum to display more items from its collection, said Father Phillip Widmann, who founded the museum in 1980 and still serves as its director as well as pastor of nearby St. Mary, Mother of God Parish.

“I counted, and I have 40 things out that I’ve never had out before,” said Father Widmann.

Items on display also are less crowded than in the past, he said. Natural light pours through the museum’s windows to brighten the space.

The museum’s four exhibit rooms focus on separate topics: the Eucharist, relics, bishops and the Cathedral of the Immaculate Conception and other items. Information cards provide details about the items so people can explore the museum on their own. 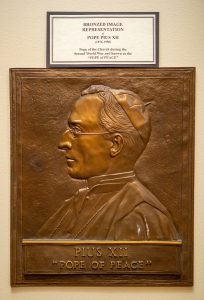 • A few oil paintings from the 16th and 17th centuries and other artifacts Father Widmann believes the diocese’s second bishop, Bishop Joseph Dwenger, brought back after leading a pilgrimage in 1874 to the Shrine of Our Lady of Lourdes in France. The paintings and items reportedly had been among those stolen by the armies of Napoleon Bonaparte earlier that century. The museum never had room to display all of the paintings simultaneously until now, Father Widmann said. 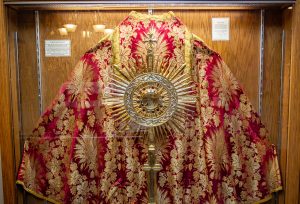 • A small, elegantly handwritten scholar’s Bible dating to about the year 1250.

• A plain, wooden, parlor desk made about 1840 and used by Msgr. Julian Benoit, the architect of the Cathedral of the Immaculate Conception and its first rector. 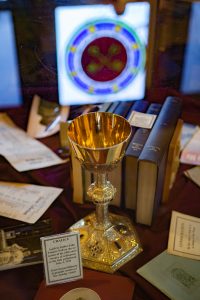 • An extensive collection of anti-Catholic books, publications and cartoons assembled by Archbishop John Francis Noll, who led the diocese from 1925 until his death in 1957. In response to anti-Catholic sentiment in the early 1900s, then-Father Noll launched Our Sunday Visitor in Huntington, a national Catholic newspaper that opposed attacks on Catholicism and informed people about anti-Catholic activities.

• Several statues, including one of the Scourged Christ made in 1932 by the John P. Daleiden Co. of Chicago. 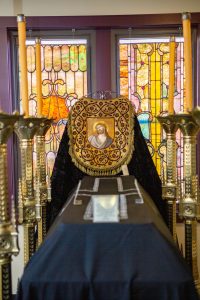 • A large display of chalices, monstrances and other items associated with the Eucharist, some of which date from the mid-1800s to the mid-1900s.

Father Widmann believes both Catholics and non-Catholics will enjoy the museum’s exhibits. He hopes visitors leave with a better understanding of the Catholic faith and clarification of any misperceptions they may have had about it.

Bishop Kevin C. Rhoades will dedicate and bless the Diocesan Museum at 4 p.m. March 5 in its new space.