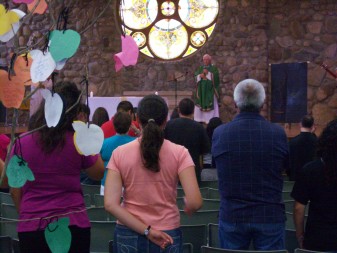 The Diocesan Hispanic Youth Retreat in August was well attended by 80 Hispanic youth, and the theme of “Jovenes Caminando Con Cristo” (“Youth Walking With Christ”) focused this year on relationships with oneself, God and others. Father Paul Bueter, retired pastor of Our Lady of Guadalupe, prays with the retreatants.

MILFORD — The Diocesan Hispanic Youth Retreat was well attended by 80 Hispanic youth, and the theme of “Jovenes Caminando Con Cristo” (“Youth Walking With Christ”) focused this year on relationships with oneself, God and others.

One of the most challenging talks was on the subject of theology of the body and healthy relationships.

Single parents represented by a young woman and young man expressed their personal struggles of single parenthood and why it is important to wait for marriage to live out a marital relationship. Jasmine and Dave willingly shared their stories with the youth with the message: “Love expressed to your spouse is love expressed to God.”

An exercise throughout most of the retreat was to carry a bag with stones, on some occasions the bag increased in weight due to carelessness. By the time of Reconciliation on Saturday evening, in front of the Blessed Sacrament, the stones were placed at the foot of the cross lifted up by prayer of thanksgiving.

The fruits of the retreat were witnessed by all especially at the time of testimonials in which retreat participants expressed their innermost life experience and their gratitude at how their eyes were opened to appreciate the persons who raised them. One young man explained how he lost his mother and father very early in life and how the grandmother who raised him passed away shortly before he came to the United States. He was very grateful to his brother who has taken on the responsibility to raise him.

One of the retreat chaperones asked the youth to forgive the parents if, when they returned home from the retreat, they did not understand the happiness the youth brought back from the retreat. “Sometimes as parents in our daily life chores, we don’t realize and do not express how much we love you, but with your expressions of love we can catch on and come to understand,” the chaperone said.

The priests supporting the youth throughout the weekend were Father Wilson Corzo, Father Philip DeVolder and Father Paul Bueter. The group leaders said, “Gracias Senor por este retiro y los jovenes. (Thank you Lord for this retreat and the youth.)”