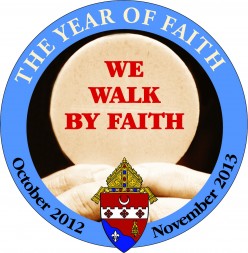 FORT WAYNE — The Year of Faith, an initiative promulgated by Pope Emeritus Benedict XVI, is coming to a close this month. A closing Mass, with a plenary indulgence attached (details presented in the Nov. 10 issue of Today’s Catholic) will be celebrated by Bishop Kevin C. Rhoades at St. Matthew Cathedral in South Bend on Nov. 24, the feast of Christ the King. The Mass will feature three choirs from St. Augustine, St. Matthew Cathedral and a Hispanic choir from St. Dominic in Bremen.

During this Year of Faith several faith-building observances and initiatives were planned, not only on a worldwide scale, but also at the diocesan and parish level. Locally, the year began with an opening Mass celebrated by Bishop Kevin C. Rhoades at the Cathedral of the Immaculate Conception on Oct. 11, 2012, a date that coincided with the 50th anniversary of the opening of Second Vatican Council.

To enhance the year’s journey in faith building, Bishop Rhoades commissioned a laminated prayer card featuring the Apostles’ Creed and other faith devotions for the faithful of the diocese. ARISE Together in Christ, sponsored by the diocese and Renew International began in earnest last year at many parishes. ARISE is a process that builds upon the small Christian community model, and works to increase open dialogue and faith sharing in participants homes, or select gathering spaces.

And in response to Pope Benedict’s call to use media and technology for the New Evangelization, the diocese created a blog and mobile app for all ages available for iPhone and Android mobile device users that went live on Oct. 11. The app, titled, “My Year of Faith” is a daily, customized resource for its users, that offered reflections and thoughts from nationally known bloggers and writers, such as Lisa Hendey of CatholicMom.com, popular Catholic authors and speakers such as Dr. Greg Popcak, as well as local voices that included Bishop Rhoades — all with daily content updates. Its intent was to offer features that lead to a deeper understanding of faith, and an increased prayer life.

Those who do not have smartphones followed the blog at www.myyearoffaith.com.

Megan Swaim, former associate director of Youth Ministry, Emily Barnes, program assistant, and Cindy Black, director of the Office of Youth, Young Adult and Campus Ministry, teamed to create the calendar of topics for the blog, with Swaim and Barnes drafting postings. Content was edited and overseen by Swaim and Black. Recruiting contributors included Swaim, Barnes, Black, Mary Glowaski, Secretariat for Evangelization and Special Ministries, and Aaron Seng, New Evangelization specialist. Photos seen on the site were provided by Nate Proulx, Joe Romie and others.

Swaim reported that she “was going through some Google Analytics earlier and found that Steve Gershom’s post ‘Hearts of Flesh’ was the most effective (statistically speaking) post thus far. It is the most searched for post, had the most links coming from social media and lots of other bloggers linking to us. Interestingly … it also produced more time on the blog than any other post. Usually direct links to the blog produce a few minutes of visiting time, enough to read a post or two. The average amount of time spent on the blog after reading Steve’s post was almost 15 minutes.”

Successive pieces, she said, were Audrey Assad’s, followed by “Dear Joseph” by John Leonetti and the Spiritual Motherhood post from Sister Alicia Torres.

Readers from around the area and as far away as England have responded favorably to the daily blog and have shared some insights into how their faith has grown over this special year.

Joan from Louisiana reported that she began the Year of Faith planning to add ways, such as preparing for Sunday liturgy and reading more religious material, to increase her faith, wondering if anything would change. The diocesan app became part of her daily reflection. She feels her efforts bore great fruit and said, “Our Catholic faith is rich. We have much to discover on our individual and communal spiritual journeys. … I’m thankful that Pope Benedict asked us to make a special effort this past year. I am changed.”

Denice from Fort Wayne evangelized by posting the blog reflections on her Facebook page. She said, “There are some that do not go to the website to see the article or have it on their phones, but will read it from a Facebook post. … This Year of Faith has been about refreshing our knowledge and sharing our faith to others. … At this time, Facebook seems to be a popular and simple way to teach and show our faith. I have found those outside the faith commenting on the posts, and later asking questions about the article.” Denice sent the blogs to her children for reflection, and to other parents struggling with their vocation. “My Year of Faith has been a great source of inspiration, information and encouragement to our family and others. We are blessed to have this simple site,” she said.