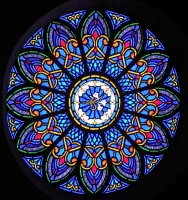 By Tim Johnson and Mark Weber

He said, “The altar will be anointed with the sacred chrism, the same oil that is used at Baptisms, Confirmations and Ordinations. Why is this so important? Because the altar is the most important object in this church. Indeed, it is the center of this church edifice since on it the memorial of the Lord is celebrated; the sacrifice of the cross is perpetuated on it; and from it we receive the Body and Blood of the Lord.

“The most important reason why this church was built, and the greatest act to be celebrated here, is the Eucharistic Sacrifice,” Bishop Rhoades said. “Every time you gather in this church for Holy Mass, you will be strengthened by the Holy Eucharist to live your faith and to be witnesses of Christ’s love. The Eucharist is what builds you up as a parish and nourishes you to love as Christ loved and to be a true evangelizing community here in Angola, a community that proclaims the truth of the Gospel in word and deed.”

In his homily, Bishop Rhoades said, “In this solemn ceremony, we are reminded that the Catholic Church is built upon the foundation of the Twelve Apostles. The walls of the church will be anointed with sacred chrism at 12 spots. We are reminded, as St. Paul wrote, that ‘we are members of the household of God, built upon the foundation of the apostles and prophets, with Christ Himself as the cornerstone.’ This is something we must always remember. We are the living stones of Christ’s Church. The Apostles are the foundation stones. The Lord Jesus Christ is the cornerstone!”

Living stones was a popular theme with those assembled for the dedication. Youth Minister Lisa Lysaught commented that “the building is so much more than brick and mortar.” The teens of the parish were well represented at the dedication Mass as servers and were one of the three generations of gift bearers symbolizing the future of the parish.

Missy Hamer, a parishioner who has belonged to the parish since the age of 6 and is now a grandmother, was the campaign funds manager. She told Today’s Catholic she was “overwhelmed by the generosity of the parish” as the parish received $4.2 million in pledges. But more importantly, she has seen spiritual benefits, especially since the introduction of Christ Renews His Parish at St. Anthony. Parishioners of St. Jude Church, Fort Wayne, helped bring the spiritual enrichment experience to St. Anthony last September. And Father Tom Shoemaker, pastor of St. Jude, was a concelebrant at the dedication Mass. Hamer appreciates how parts of the old churches were incorporated into the new church.

Jim Scott, who served with his wife Chris on the Interior Design Committee, said, “We’re in total awe.” Scott who has been a member of the parish for 40 years exclaimed, “How did we ever pull this off other than with God’s help!”

Although the design of the new church is similar to St. Therese in Fort Wayne, Chris Scott commented about the incorporation of the stain glass, especially the lilies, a symbol of St. Anthony, that was found and restored into the 12-foot rose stained glass over the altar.

The lilies once were above the main entrance of the original church. The glass was removed, stored in a neighboring garage and forgotten. Since the lily is a symbol of St. Anthony of Padua — and St. Anthony is the patron saint of “lost articles” — it is reassuring to conclude it was the saint’s intention that this lily window be rediscovered for the new church.

Before the final blessing of the impressive ceremonies, pastor Father Pasche, visibly moved, made a few remarks acknowledging the participation of individuals involved in the long process which reached fulfillment with this Mass. Over the past eight years, he said, nearly every member of the congregation had contributed, in one way or the other, some with difficult sacrifice involved.

Of these offerings, perhaps none could be more dramatic than that of parishioner Marna Cimbal, who was baptized into the faith shortly before her wedding at St. Anthony’s in 1968, and whose beloved husband, George, was killed in a sudden highway accident only six days before Christmas of 2005.

As a tangible reminder of their life together, Marna Cimbal, wore their wedding rings on a necklace, often grasping them in a difficult or sublime moment.

As a widow, and a cook in the WalMart Deli, Marna was on a tight budget, and in a difficult spot when contributions for the new church were requested. Aware of her late husband’s loyalty and love for his parish, she sold the cherished rings and added the widow’s mite for the good of the community. Such is the spirit of St. Anthony of Padua in Angola.

Vince LaBarbera contributed to this article.
For more photos from the dedication visit the photo gallery or click here.