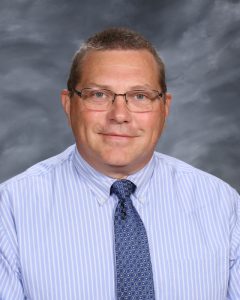 FORT WAYNE — With joy and enthusiasm, and the support of the Most Reverend Bishop Kevin C. Rhoades and Secretary for Education Carl Loesch, Superintendent of Catholic Schools Dr. Joseph Brettnacher announced July 22 the appointment of Jeffrey Kieffer as associate superintendent of schools for the Diocese of Fort Wayne-South Bend.

In making the announcement, Brettnacher acknowledged the “exemplary” work of Amy Johns, who has returned to Bishop Dwenger High School, Fort Wayne, as an assistant principal.

Kieffer has been a Catholic school administrator since 2005 and a principal in the Diocese of Fort Wayne-South Bend since 2010, most recently at St. Joseph School in Decatur. He received his master’s degree in educational leadership and bachelor’s degree in elementary education from Ball State University. He began his career in Catholic education in 1999 in the Diocese of Lafayette-in-Indiana, and  has served on diocesan committees for accreditation and technology as well as the Principals’ Executive Council.

Kieffer resides in Hartford City with his wife of 27 years, Angela. They have three grown children: Levi, Erica and Jacob.

Kieffer is a 1985 graduate of Blackford High School in Hartford City. He served in the U.S. Army from 1985-89. Subsequently, he was selected for the West Point Preparatory School to prepare for matriculation at West Point. Following his first semester, he made the decision that this was not the career path for him. He resigned the appointment to serve the remainder of his enlistment and prepare for a career in education upon his honorable discharge.

After graduating with his undergraduate degree and a Bachelor of Science degree in 1994 Kieffer was employed from 1995 to 1999 as the computer information technology resource and children’s librarian at Hartford City Public Library.

He served as principal at St. Mary of the Assumption until 2015, when he accepted the principal position at St. Joseph School in Decatur, where he has served for the last four years.

Kieffer is a certified Indiana Safety Specialist, and also has a certificate in Indiana Principal Leadership Academy-Group 45, as well as Indiana Content Area Reading, plus Mentor Training and “Curriculum Mapper” training. He is CompTIAA+ certified in computer repair, has a basic catechist certification from the Diocese of Fort Wayne-South Bend and is a Level 1 and 2 Google for Education certified educator.