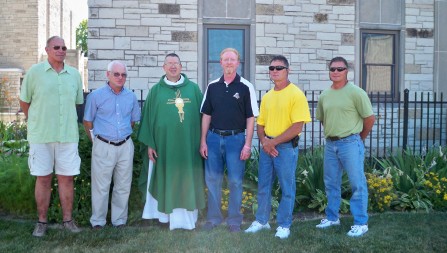 DECATUR — St. Mary of the Assumption Catholic Church of Decatur recently held a Blessing of the Grounds ceremony for the new parish hall that is currently under construction. Father David Voors offered the blessing that was attended by members of the parish following the Saturday, July 9, evening Mass. The general contractor for the project is Darling Construction, owned by parishioners Ron and Tom Darling, and Moake Park Group of Fort Wayne is the design architect.

The project is the culmination of the St. Mary’s Building On Our Heritage capital campaign, which began in the fall of 2004. The campaign raised funds for the Legacy of Faith Endowment established by the Diocese of Fort Wayne-South Bend, the new St. Joseph Catholic School gymnasium that was completed in the summer of 2009, and the parish hall that is planned for completion in the spring of 2012. The hall will include a central gathering space, two large meeting rooms with an adjacent kitchen area, bookstore, SCRIP office, adoration chapel, men’s and women’s restrooms and storage space.