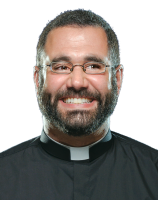 His very name speaks of God. Benedetto meaning “blessed” in Italian, and Deacon Dennis Di Benedetto, of Italian-Sicilian heritage, feels just that. The past year, living and serving as a deacon, studying as a graduate student and preparing for the priesthood, he has known God’s great love and mercy calling him to be one of his own shepherds.

Deacon Di Benedetto is originally from Medford, in southern New Jersey, the son of Michael and Nancy Di Benedetto. Raised in a practicing Catholic family, he often accompanied his mother, an English as a Second Language teacher, to immigrant homes in his community. There, as his mother taught English, he would play with the other children, who often did not know English either. Through this first-hand experience he learned how to live the Catholic faith and serve God’s people, and that caring and sharing God’s joy is an international language.

Attending Mount St. Mary’s University in Emmitsburg, Md., Deacon Di Benedetto was a philosophy major with a history minor. Returning there years later after discerning a vocation to the priesthood, as a graduate student and seminarian with the Diocese of Fort Wayne-South Bend was a treat, he said. Many of his courses utilized his previous studies: One of his favorite courses on ecumenism. The multicultural world of his early upbringing offered him a unique lens with which to study this area of theology.

Another highlight of the past year was a 20-day pilgrimage to the Holy Land with his fellow seminarian classmates. Simply being in Galilee and standing at the shore of  the Sea of Galilee was an incredible experience, he said. “I better understood the dynamic between Jesus and the apostles. Being in a group of guys together, walking the same area where Jesus walked, I felt part of that same fraternity.” They also visited the exact sites described and mentioned in the Bible, “names I might have skipped over before,” such as the site of the multiplication of the loaves and fishes and of Caesarea Philippi. The latter site was especially poignant for Deacon Di Benedetto, as it is close to the Syrian-Israeli border. “We actually looked over the border and could see Syria.”

A final, important part of Deacon Di Benedetto’s preparation for priestly ordination this year was a 2016 seminar at Mount St. Mary’s with Msgr. Michael Heintz of the Diocese of Fort Wayne- South Bend. The Pastoral Assessment Integration Seminar focused on priestly pastoral parish preparations, where situations and responses could be discussed. Deacon Di Benedetto said it was especially helpful to study, as a group, the very practical, real-life issues that they might encounter in ministry, from both a theological and pastoral lens.

Deacon Di Benedetto also served as a deacon on the weekend in two parishes in the Diocese of Harrisburg Pa.,: St. Mary Parish in Fairfield and St. Rita in Blue Ridge Summit.

“There is a wisdom in the church, a reason we have typically a full year of the diaconate to be in the sanctuary, performing the sacraments,” he reflected. Although he found himself gradually embracing his new role, he also came to appreciate that “perhaps it would be too much, all of a sudden, to one day be ordained a priest!”

In a week, he will receive the sacrament of holy orders, having his hands anointed with holy oil; he will receive the new vestments of the order and his soul will be sealed forever with an indelible mark. “I feel peaceful, kind of surreal,” he reflected.

“I know there are many people I haven’t even met who are praying for me, and that really touches my heart. I am certain I have never had more people praying for me in my life than I do right now, and I certainly feel that grace. It must be the reason I’m not nervous.”

Deacon Di Benedetto also credits his investiture into the Diocese of Fort Wayne-South Bend to the Poor Sisters of St. Clare, a cloistered order of women religious in Fort Wayne. “Four years ago, when I was wrestling with the decision to transfer from my former religious community (the Pittsburgh Oratory of St. Philip Neri) to the Diocese of Fort Wayne-South Bend, the nuns were some of the only people who knew I was considering this. I always say they ‘prayed me into the diocese.’”

Deacon Burgener anxious to ascend the ‘mountain’ of faith’ 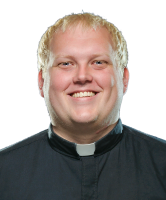 Life often resembles a mountain, insurmountable to climb and yet beckoning a person to try. At least, that is how Deacon Eric Burgener views his life and his call to the priesthood. Though his call began during the tumultuous ‘tween years, his initial “yes” to God wasn’t fully realized until young adulthood.

“I remember being at a school Mass at St. Charles, and I just realized the priesthood was where I needed to be. After receiving Communion, my eyes filled with tears of joy, but I knew it wasn’t cool to be seen crying,” he said.

“I thought again more seriously about the priesthood there, but I ran away from it.” The world, and pressure from friends, were enough to keep Deacon Burgener away from his vocation — for a time.

“My mom has always been highly instrumental in my vocation to the priesthood,” he said. “I received a lot of flyers about discernment retreats for the priesthood when I was in high school, but I threw them all away. My mom must have known that I was rejecting my call, because she secretly retrieved them all, and I eventually attended one.”

Vocational calls can be akin to facing the reality that the life God asks of his children far surpasses the life that they imagine will make them happy. Deacon Burgener pursued much of what the world promises will fulfill a person, but he discovered that true happiness and deep, abiding peace result instead from a wholehearted “yes” to God.

“It was like I was running away from the mountain God wanted me to climb,” he explained. “I started off making the ascent, but then I stumbled and fell upon the rocks of earthly pleasures. Eventually, I hit rock bottom.”

During college, Deacon Burgener’s journey hit a crossroads. He chose to be faithful to Mass attendance, but his college roommates and friends laughed at him. In turn, he became ashamed and didn’t want to admit what he was doing.

The turning point occurred when he chose to enter into solitude with Jesus in front of the tabernacle at St. Paul’s Catholic Church in Bloomington, close to where he attended college. “I asked God, ‘What do you want me to do?’ and immediately I saw myself in sixth grade again, when I knew God wanted me to be a priest,” he shared. “It was as if God replied to my heart, ‘Do you want to follow me? Be my priest,’ and I said ‘yes.’”

During his senior year of college he became a daily communicant, attended confession regularly and received spiritual direction from the Dominican priests who ran the Indiana University Newman Center.

“We’re all called to go up that mountain,” he continued, reflecting on his path to priesthood, which culminates Saturday, June 3, in his ordination at the Cathedral of the Immaculate Conception, Fort Wayne. “The beauty is that the source and summit — the Eucharist — gives us an adrenaline shot in the heart to wake up and follow God’s call. The mountaintop is heaven. The priesthood is the active work, the active ministry that heals others’ wounds by way of the Eucharist.”

What about the struggles along that arduous climb up the mountain? Deacon Burgener responded: “As a priest, you have to be the priest and the victim. I have to realize that there will be suffering, there will be doubts. To arm myself, I have to remember not to put too much stock in the enemy’s attacks, and that God is stronger. I also need to stay close to Our Lady. She’s the enemy of the enemy.”

Deacon Burgener recommended asking for grace when a person is discerning a vocation. “Then God makes our vocation evidently clear. In the dark moments of our lives, when we say ‘yes’ to God, it means more than during the times of consolation we experience.

“What you fall in love with will dictate what you do in this world, the type of person you will be,” he said. “What you love determines who you are and will bring you happiness if you love God. I lived and experienced what the world has to offer, and it’s nothing in comparison to what the church has to offer. The climb is worth the view, when you reach the top of your mountain.”