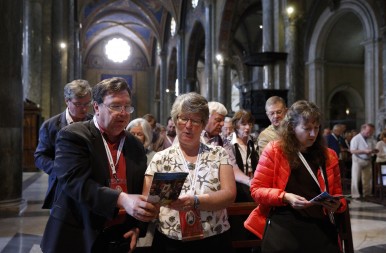 CNS/Paul Haring
Permanent deacons and their wives attend a conference at the Basilica of Santa Maria Sopra Minerva in Rome May 27. Attendees were participating in the Jubilee of Deacons, a celebration of the Holy Year of Mercy.

ROME (CNS) — Thousands of permanent deacons and their wives began their Year of Mercy celebration by cutting straight to the heart of what it means to be a deacon, how the ministry impacts their families and the challenge of explaining their vocation to others, including bishops and priests.

The pilgrims divided into language groups and hundreds of English-, German- and Portuguese-speaking deacons and their families gathered May 27 at Rome’s Basilica of Santa Maria Sopra Minerva.

Whether alone or with their wives, dressed in clerical collars or T-shirts because of the afternoon heat, they began sharing experiences of formation, homiletics training and ministry assignments even before the formal program began.

The Jubilee of Deacons was to conclude May 29 with a Mass celebrated by Pope Francis in St. Peter’s Square.

In the informal conversations and the sharing afterward, the women were active participants. Many of them had accompanied their husbands to formation classes, and all of them are directly impacted by their husbands’ ministries.

Deacon James Keating, director of theological formation at the Institute for Priestly Formation in Omaha, Nebraska, said deacons are born in families, most of them fall in love and start families before discerning a vocation to the diaconate, and they often are called upon to minister to other families.

Deacon Keating insisted that a deacon who has had proper formation in prayer, theology and the sacraments “will become a better husband,” his wife “will actually fall more in love” because he will be converted to a closer relationship with Jesus and a greater availability to others.

However, he said, that availability is not so much about time and activity, as it is about “being” a deacon. It’s about “relationships, not ministries,” Deacon Keating insisted.

Kimberly Norman, whose husband, James, is a deacon at Our Lady of Sorrows Basilica in Chicago, said Deacon Keating was right. Speaking of her husband, she said: “Yes, he is a better man. Yes, he is a better husband.” The preparation and ministry “has strengthened our marriage.”

Deacon Norman said his wife has changed, too, and is a particularly good example and reminder to him to make more time for prayer.

The jubilee for deacons began just two weeks after Pope Francis told members of the International Union of Superiors General that he thought it was a good idea to establish a commission to study the role of New Testament deaconesses and the possibility of women serving as deacons today.

The Normans said that was a great idea. “I’m very hopeful,” Kimberly Norman said. Deacon Norman agreed, saying, “Clearly, women have had leadership in the church, but it’s not recognized by ordination.”

Deacon Anthony Gooley of the Archdiocese of Brisbane, Australia, and a lecturer in theology at the Broken Bay Institute, told the crowd that deacons were instituted in the early Christian community to minister to people whose particular needs were not being met by the disciples.

They have the same mission today to reach unserved or underserved populations, he said. In fact, their potential contribution to the new evangelization “is limited only by imagination and by the will of those who engage in placements and pastoral planning in the dioceses.”

“Too often a deacon is left to work out the details of his own pastoral ministry,” Deacon Gooley said, and arrangements are made with “a handshake deal with the parish priest.”

is remarks led to a ripple of agreement around the basilica.

Deacon Greg Kandra of the Diocese of Brooklyn, New York, a popular blogger and multimedia editor for the Catholic Near East Welfare Association, focused on the ministry of deacons in the workplace. Many of the almost 45,000 permanent deacons in the world continue to work in secular jobs in to support their families even after ordination.

But a deacon is a deacon no matter where he is, Deacon Kandra said. He is called by the church to be on the “front line,” wherever he is.

“The deacon is called to be a witness to compassion,” helping those who are hungry or poor, whether materially or spiritually. “They might work in the cubicle next to yours,” he said.

As a witness to the dignity of work, Deacon Kandra said, the deacon is called to stand up for just wages and decent working conditions, but also to improve the workplace environment by “quieting gossip,” listening to grievances, speaking up for those without a voice.

“Some of the most important missionary activity in the world today may begin in unlikely places, not in a jungle or desert of some far-off country, but around the water cooler, or on a bus, or over coffee in the company cafeteria,” he said.

“What began on the altar on Sunday,” Deacon Kandra said, “continues in the world and in the workplace on Monday.”