Last year, after considering the possibilities of virtual-meeting technology, a long-established, Chicago-based Catholic group of Black women decided to geographically expand the reach of their annual salute to role models for young men. Among the farther-reaching honorees in 2021 is Deacon Mel Tardy of South Bend.

The award’s new scope, combined with Deacon Tardy’s extensive list of contributions through his ministry as a deacon — in the Diocese of Fort Wayne-South Bend and nationally — made him an exemplary choice for the recently bestowed Archbishop James P. Lyke African American Male Image Award.

The annual event allows the Knights of Peter Claver Ladies Auxiliary to raise funds for college scholarships that go to outstanding African American high school seniors in the Archdiocese of Chicago.

The awards are named in honor of the late Archbishop Lyke, who rose to be the nation’s highest-ranking Black Catholic clergyman in 1992. Lyke led the Atlanta archdiocese until his death one year later. 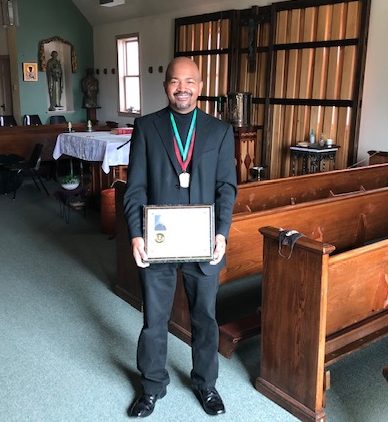 William Schmitt
Deacon Mel Tardy of St. Augustine Parish, South Bend, was recently honored as one of this year’s recipients of the Archbishop James P. Lyke African American Male Image Award. The annual award is a salute to role models for young Black men from the Knights of Peter Claver Ladies Auxiliary in Chicago.

Deacon Tardy, who celebrates his 10th anniversary of ordination in May, ministers to all the people of St. Augustine Parish while playing several other roles in South Bend and beyond. But he said he was especially humbled to be seen as a religious leader — among honorees from business, education and other arenas — who is affirming young men’s aspirations.

That’s the driving force for his membership in a mentoring group called “100 Black Men of Greater South Bend,” part of a nationwide group that he said realizes the encouragement from national figures like Barack Obama and Kamala Harris must also be seen at the local level.

“There’s a lot of trauma and a lot of despair” among young Black men who have been much maligned and often have grown up without male role models at home, he said. Successful mentors, representing their community’s strengths in ways not seen in some nuclear families, add credible endorsements for steps like preparation to attend college.

Deacon Tardy’s contributions to that voice of the broader community extend to membership on the Black Catholic Advisory Board, which helps guide the Fort Wayne-South Bend diocese regarding pastoral and social issues, as well as promotion of unity and pride throughout the Church. Most recently, he noted that the diocese had sponsored virtual meetings during Lent to spotlight six Black American Catholics who are on official paths toward possible canonization as saints.

A University of Notre Dame graduate, he also serves today’s students as an associate advising professor in the university’s Center for Undergraduate Advising.

Gaining much support from his wife, Annie, and their children, Deacon Tardy remains a source of great energy for his St. Augustine family. In an enduring and transformative effort that he established for role-modeling among Black youth, the parish sponsors an annual flag-football game where men and boys come together for competition and intergenerational bonding.

The Ladies Auxiliary in Chicago may not have heard about the parish football tradition in South Bend, but they recognized how the ministry of “Deacon Mel,” as he is called, reached near and far. His busy pursuit of solidarity among Catholics, which began even before his ordination, strives to transcend the distances between people.

Such transcendence was modeled by the heavenly patron for the Knights and Ladies — St. Peter Claver, a 17th-century Caucasian priest who ministered to the slaves of the New World. The deacon’s award as a role model for new generations, amid new challenges, was likewise grasped using God’s love, justice and mercy to envision bigger and better encounters.