Deacon Kevin Ranaghan, one of the first permanent deacons in the modern history of the Diocese of Fort Wayne-South Bend, delivered his last homily at St. Bavo Parish, Mishawaka, April 28. Because he has served there for 34 years, a few tears flowed as he expressed gratitude to God, his gifted and supportive wife Dorothy, the four bishops and five pastors under which he has served and “the people of God at St. Bavo’s.”

“This is such a warm, friendly, caring parish,” said Deacon Ranaghan. “It’s hard to say goodbye.”

The feeling is mutual. Longtime parish secretary Sue Alwine called him a “sweet man with a delightful personality, always a joy to work with. He’s part of the Bavo family, and we’ll really miss his presence.”

Gus Zuehlke, in charge of faith formation at St. Bavo, said, “I will miss Kevin Ranaghan a lot as our deacon. He has proven himself a marvelously committed servant of the Lord. He’s a superlative preacher who brings the Gospel to ordinary people’s lives with such grace and dignity. He and Dorothy together have done a great job of witnessing Christian family life to our parish. And I will miss his singing of the ‘Exultet’ on Holy Saturday.” 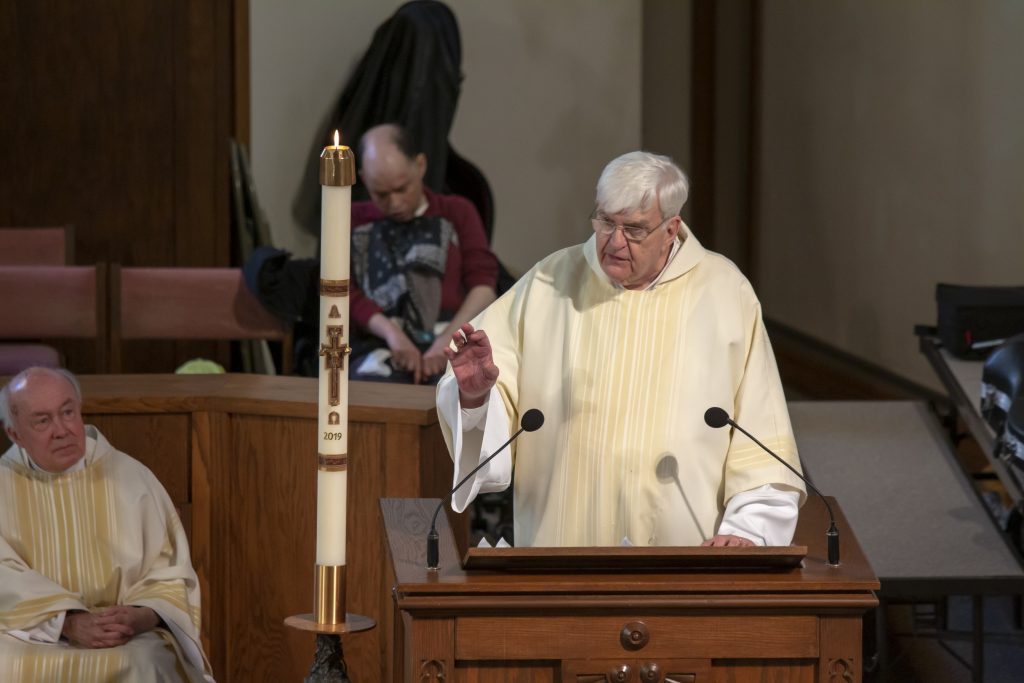 Deacon Kevin Ranaghan delivers the homily at Mass on Divine Mercy Sunday at St. Bavo Church, Mishawaka. He has given more than three decades of diaconal service to the parish and entered retirement this week. — Photos by Jennifer Kedik

There’s a story to how Deacon Ranaghan wound up at St. Bavo. His first assignment as a deacon was to Sacred Heart Parish at the University of Notre Dame: Years of service to the national and international charismatic renewal in the Catholic Church followed. Then one day in the Bronx, New York, Deacon Ranaghan’s mother, Irene, learned that her neighbor’s nephew, Father Paul Bueter, who served in the Diocese of Fort Wayne-South Bend, had recently returned from Panama and needed a hand in his new assignment at St. Bavo.

“My son’s a deacon, and he isn’t currently assigned to a parish,” she volunteered. That was in 1984. 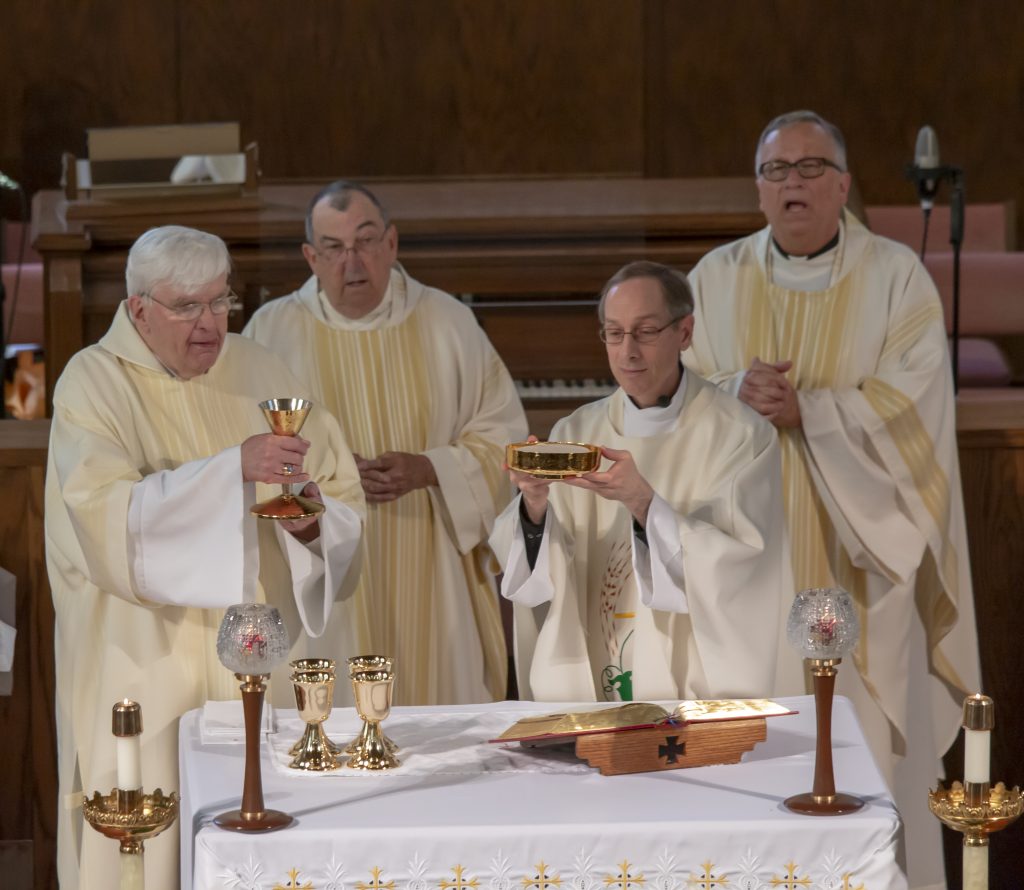 Along with his wife, who is a teacher, theologian and author, the Ranaghans helped train three classes — about 15 permanent deacons — for the diocese at the Apostolic Institute in the early 1970s. Most have since died, retired or moved out of state, but Deacon Brian Miller is still at St. Anthony de Padua Parish, South Bend.

Bishop Leo A. Pursley ordained Deacon Ranaghan in 1973. He is grateful for Bishop Pursley’s wisdom and foresight in approving implementation of formation for the permanent diaconate in this diocese so soon after the reforms of Vatican II. 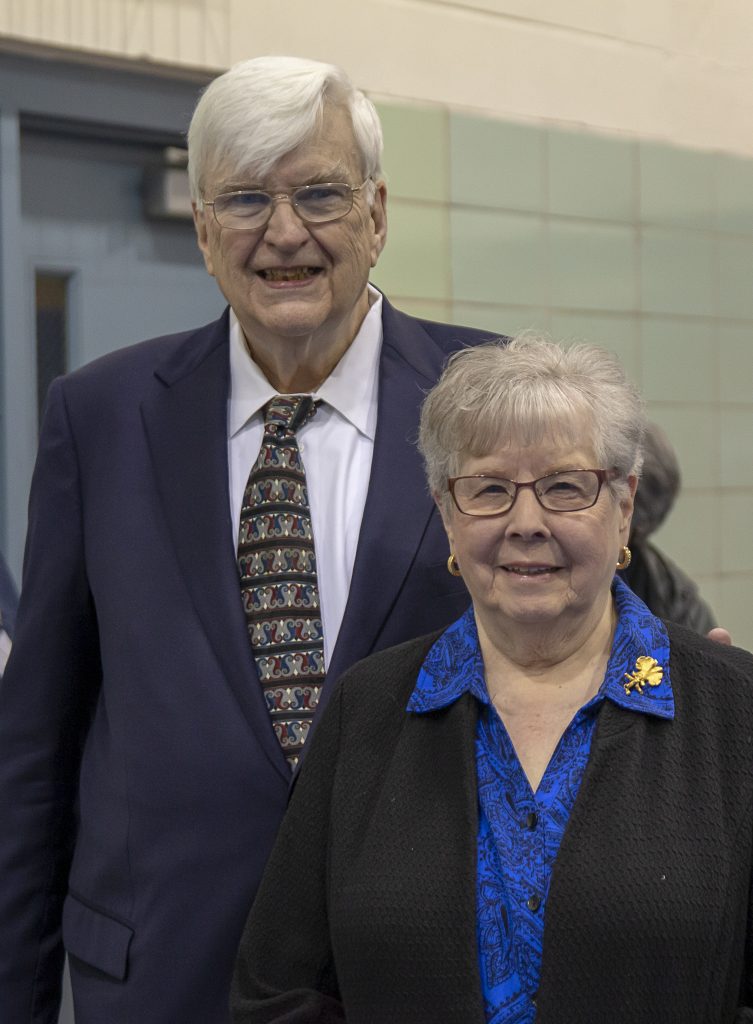 A reception in honor of Deacon Kevin and Dorothy Ranaghan took place in the parish hall following the Mass.

Deacon Ranaghan holds a Ph.D. in theology from the University of Notre Dame. He loves to prepare and deliver homilies. About once a month during his tenure at St. Bavo, he would give all the weekend homilies, which was a great support to the busy pastors. Father Jim Shafer, who served at St. Bavo for 13 years, found it “extremely valuable. Having him preach once a month gave me and the people a break, and his homilies were always excellent.”

Father Barry England, the pastor at St. Bavo for 15 years, agreed. “He’s a faith-filled person who was very supportive of me and the parish. I certainly wish him God’s blessings in his well-deserved retirement.”

An appreciative Deacon Ranaghan joked, however, during the homily on his last Sunday at the parish that, “The CD of’ ‘Kevin’s 50 Great Homily Hits’ will not be available after this Mass.”

In addition to gratitude, his Divine Mercy Sunday homily touched on the themes of faith, forgiveness and mercy. He urged parishioners to invest in their faith as a way of resisting “creeping doubt” and concluded by telling them, “I look forward to hearing the great things you are doing in and for the Kingdom of God.” Several priests and brother deacons assisted at the Sunday liturgy.

Deacon Ranaghan has been heavily involved in the liturgical life of the parish and also was responsible for preparing families seeking to have their young children baptized. Assisting at weddings and funerals has more often happened by personal request. He also has served on the diocesan Deacon Community Board, which plans social events and helps provide ongoing formation.

The role of a deacon is often misunderstood, Deacon Ranaghan said. He has been addressed as everything from “monsignor” to “Kevin” (Bishop Kevin C. Rhoades). Many Catholics also don’t realize that, unlike priests, deacons are not salaried, he said, except for a small stipend to cover continuing education and retreats. 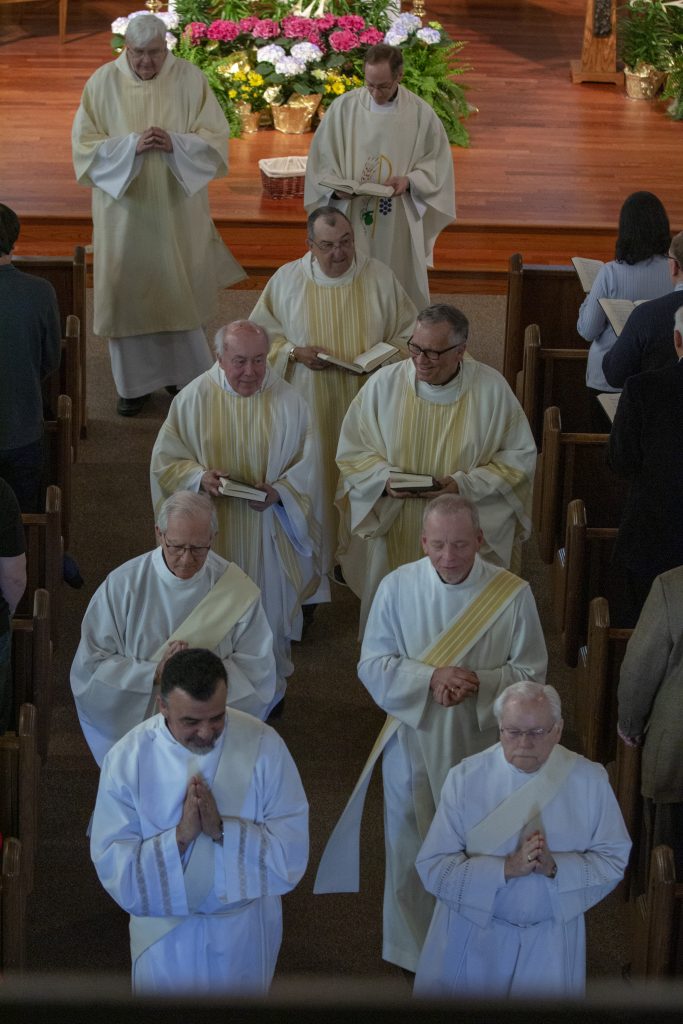 The Ranaghans are in agreement that at age 79, it’s time for the deacon to step down from active ministry. “I know how much he loves this ministry,” said Dorothy, but she also is looking forward to sitting beside him in the pew, and they also look forward to the new opportunities for service God may send their way.

Although stepping out of regularly scheduled ministry, he has no plans to move. He always will be a deacon, he said, and sees himself “heading off into the deacon bullpen” when called upon. The Ranaghans feel assured that St. Bavo is in good hands with Pastor Father Peter Pacini, CSC.

“This community has been very blessed to have Deacon Kevin here. He’s an inspiration and a role model,” Father Pacini said.