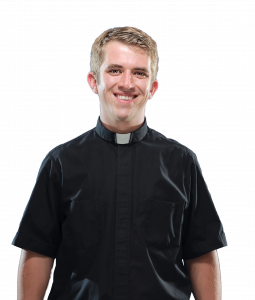 A pretty typical Catholic family was the setting in which Deacon Patrick Hake grew up. He attended St. Vincent de Paul School in Fort Wayne during his formative years, then Bishop Dwenger High School during his adolescence. Prayer was integral to his faith journey, yet it didn’t become a powerful and life-changing connection with a person until he was well into high school.

Always part of the St. Vincent’s youth group, he decided to participate in one of the dynamic retreats offered throughout the year for teens. On Saturday evenings during Life Teen retreats, participants have an opportunity for eucharistic adoration. For Deacon Hake, the experience was incredibly transformative.

“As a child, I didn’t really know what was going on in adoration. But at the Life Teen retreat I experienced Jesus in a very personal way for the first time. I was open and ready to receive Christ,” he offered. Still, he said he wasn’t ready to discern a call to the priesthood because he wanted to have a typical, lay life.

God was laying the foundation for Deacon Hake to respond to the call, however, and growing up in a dynamic and thriving parish and surrounded by priests who were genuinely happy had made a major impact on him. “I grew up with Father Mark [Gurtner], Father Jason [Freiburger] and Father Andrew [Budzinski]. But we also had Msgr. John Kuzmich, an older priest who was happy. I saw that priests, whether young or old, were not burdened by their vocation but were truly happy living in this life,” Deacon Hake added.

It helped that he came from a family where religious vocations were not uncommon. He had two great uncles who were priests, although they passed away before he was able to meet them. It also helped that he knew his parents would be open and supportive if he chose to enter seminary.

In college, Deacon Hake decided to study chemistry. He did all the normal activities young adults do, like hang out with friends and have fun. Even so, he had a nagging feeling that he was missing something. “I had moments where I was thinking about my future, and I couldn’t see myself in the role of a teacher or researcher,” he mused. “I had friends, but no inner peace. I felt like I was spinning my wheels.”

He decided he would take the discernment process slowly. At the end of each semester in college, he would tell himself he needed to decide whether or not he was going into seminary. But then he’d convince himself to stay in college and see if things improved. “I did this four times,” he admitted. “Finally, I realized I was avoiding God.”

He was still hesitant to take the full leap. Each semester in seminary, he would re-evaluate whether he was happier there than when he was in college. “At the end of the first year, I felt so fulfilled,” he said. “I decided to continue this journey year by year.”

In seminary, Deacon Hake felt supported by like-minded young men. He realized that during his college years he had felt very awkward and out of place when he wanted to pray or attend Mass: There wasn’t much encouragement from other young adults at the public university he attended. But at seminary it wasn’t “weird” to see someone praying. “Being surrounded by men who are all striving for the same thing is energizing to me,” he continued.

Now Deacon Hake is coming to the end of his journey as a transitional deacon and preparing for ordination to the priesthood in early June. “I’m excited to be on the front lines of grace,” he said. For him, the priesthood is about that constant witness of being God’s image in the world. “When people see a priest in his collar, they don’t see the person. They see God.”

He sees his vocation in light of eternity. He will be able to be in the midst of where God is at work on a daily basis: funerals, weddings, baptisms, Mass, confessions and so on. But he also believes he will be an “instrument of God’s mercy and love” everywhere he goes, “even to the grocery store,” he said.

“Some people may have lost sight of God. They got caught up in this world and forget about the next. But as a priest, I’ll be a reminder that God is present and loves them and is calling them back to a relationship with Him,” he reflected. “That witness makes people start to think about their lives, the condition of their souls, and what’s eternal.”