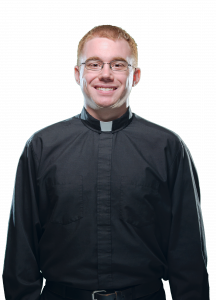 God has paved a path for Deacon Jay Horning that is perhaps a little nontraditional or unique. He did not grow up dreaming of becoming a priest, nor did he grow up in an environment that might have cultivated the possibility. What he did have, once he began a relationship with God, was a deep desire to follow where God was leading him.

Deacon Horning grew up in South Bend and graduated from Clay High School before enrolling in the University of Saint Francis in Fort Wayne. While in South Bend, church was not something he attended. In fact, he was not baptized until he was 22. His involvement with the Church started much later in life than most, and the first time he participated in Mass was in college.

Even though the University of Saint Francis is a Catholic institution, that particular element did not influence his decision to attend — although it did impact him in the near future. He attended college to study nursing, but changed his major to psychology after two years and graduated with a bachelor’s degree. He was then in pursuit of post-graduate employment.

He was hired as the high school youth director at St. Elizabeth Ann Seton Parish in Fort Wayne, where he worked for two years prior to entering seminary. “Father Jim Shafer was a big influence,” he said. “Working with the high school students also made me more aware of a greater calling that God was asking from me.”

“I think I first recognized a call to the priesthood, or at least to go to seminary and discern more, about a year after becoming Catholic — when I was 23,” Deacon Horning said. “Having an opportunity to go to World Youth Day in Madrid, Spain, with the diocese in 2011 was also helpful for me to see and discern the priesthood. Working with the high school students was helpful too.”

Deacon Horning encouraged the age group that has greatly influenced his journey thus far by saying, “If you think God is asking you to do something great with your life, whether that be a call to the priesthood, to married life or to the single life, please, remember that you are first called to holiness. If you don’t know what that means or how to do that, then go to your parish priest and talk to him or to a seminarian, or to someone that you find holy whose life you desire to copy.

“I would also want you to recognize that God calls us to vocations in which we will find total happiness, and that even though the priesthood may be somewhat mysterious, it is an amazing life. I’m really excited about it and looking forward to a long priesthood.

To the parents of a young adult, he offered: “Your child is called to holiness, and you are the example of that holiness for them. Encourage them to grow their relationship with God. Go to Mass, talk about faith at home, do Bible studies, have them engage and be engaged yourself in the Church and the community. From that relationship, they will better be able to discern if call is being given to them.

“Pray for them, and speak about the good that you see in the priesthood and religious life as well as the good you see in marriage. It is up to them to say ‘yes’ because it is their vocation, but you can greatly encourage them while they are in pursuit of that ‘yes.’”

God has worked very quickly in Deacon Horning’s journey to the priesthood. He said, “How fortunate I have been while saying ‘yes’ to Him. I’ve been very blessed while being in the seminary, and opportunities have been afforded me thanks to the people of our diocese and other generous benefactors.”

He hopes that his priesthood “brings people closer to Jesus Christ, and in the end, brings them to heaven. I hope that they encounter a loving God in the sacraments, the Mass and Eucharist, the confessional, the baptisms of their children, the anointing of the sick for those suffering and marriages of couples, and that they are able to grow closer to God.”

When asked what he hopes his vocation will bring to his own life, Deacon Horning replied, “My vocation is not necessarily for me, but for the people of our diocese and the people of God. But I know that my priesthood will bring me great joy and fulfillment.”