Deacon Frederick Everett will end 33 years of diocesan employment June 30 to pursue a calling for missionary work. He will continue his diaconate service at St. Matthew Cathedral Parish, South Bend.

Deacon Everett was appointed Secretary of the Secretariat of Evangelization and Discipleship in December 2017. For 29 years prior to that he was co-director, along with his wife, Lisa, of the Office of Family Life. Lisa also works in the secretariat and will continue that work in the Secretariat for Pastoral Ministries and Catechesis.

His decision to leave diocesan employment was two-fold, Deacon Everett said, and the merger of the Secretariat of Catholic Education and the Secretariat of Evangelization and Discipleship into one new Secretariat of Pastoral Ministries and Catechesis created a timing-is-right moment. He plans to pursue missionary work in Cuba to which he first felt called about several years ago. 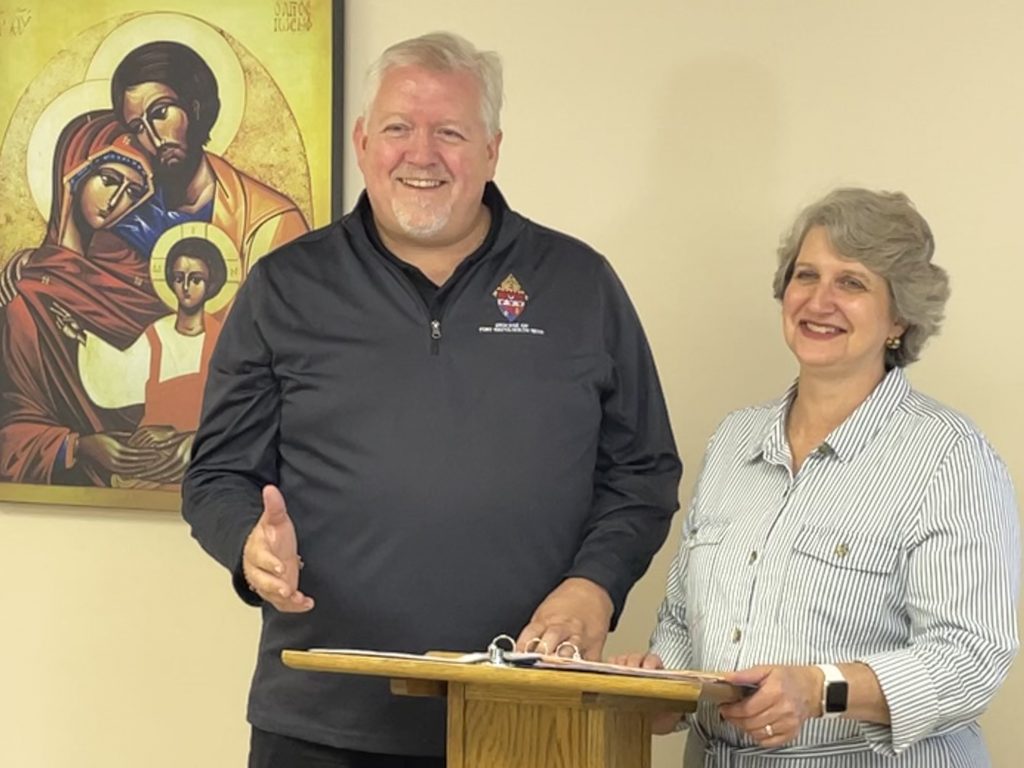 Provided by Lisa Everett
The Everetts are pictured during a recent event. Deacon Everett is leaving diocesan employment to pursue a call to missionary work, while Lisa will continue working in the new Secretariat for Pastoral Ministries and Catechesis.

Deacon Everett said that nine years ago he traveled with his mother, cousin and aunt to Cuba. His mom and aunt were raised there but left to come to the United States in 1961. They hadn’t been back since. Eventually they became U.S. citizens.

Pope Benedict traveled to Cuba in 2012 to commemorate the 400th anniversary of the patroness of Cuba — Our Lady of Charity. For Deacon Everett, the trip showed him the great need of the Church in Cuba. It faced serious difficulties and had few resources, including priests and ministers.

The following year he went on retreat to the Abbey of Gethsemani in Kentucky. During the retreat, he felt the Lord calling him to do mission work and to pursue greater poverty and detachment to things. He thought it could be something he could pursue when all seven of their kids were grown.

“I was excited to tell Lisa, and she was game,” he said.

Deacon Everett, who at the time was not ordained, shared that the following month his daughter told him, “You’d be a good deacon.” When a priest friend told him the same thing a month later, he prayed about it. He thought that being a deacon might lend itself to missionary work.

He spoke to the Bishop Kevin C. Rhoades about it and knew there was a deacon class starting, but said he told the bishop, “If I do this, I think the Lord is calling me to mission work.”

“The bishop was gung-ho about it, saying we need more missionaries.”

But when the bishop asked him to take over the Secretariat of Evangelization and Discipleship three and a half years ago, he thought, “Maybe I’m being called to do mission work in our country.”

Deacon Everett said that as time went on, the bishop started looking at restructuring the secretariat and their youngest daughter entered college, he felt one door was closing and the door to Cuba was opening.

The couple is starting a 501(c)(3) organization, and Deacon Everett will travel back and forth to Cuba. He plans to be back in South Bend and at St. Matthew Cathedral Parish at least one weekend a month to preach. He pointed out he may be able to do things via Zoom as well, for the parish or diocese.

Among the things Deacon Everett said he has enjoyed most during his service to diocese are one-on-one counseling, pastoral counseling and spiritual direction — “and the writing,” he said. He and Lisa co-wrote a column for about four years. He said it was a growth process as at first: They approached it with different styles and points of view but then picked up on each other’s styles.

“We found our combined product was superior to what either of us could’ve done individually — it was a neat discipline.” 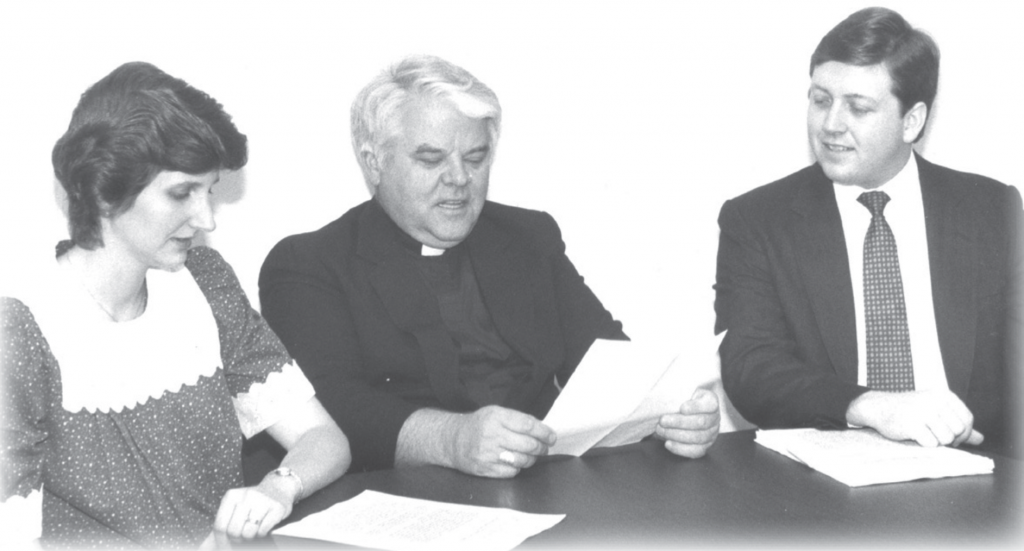 Deacon Frederick Everett and his wife, Lisa, began working for the Diocese of Fort Wayne-South Bend under Bishop D’Arcy 33 years ago. Here, they conduct a press conference after the Supreme Court decision Roe V. Wade.

Looking back, he said three things stand out to him. The first is all the couples they helped with marriage preparation. “We prepared thousands of couples over the years.”

He noted that they also produced a videotape series that hundreds of couples viewed in the homes of host families. He was thankful for the opportunity to “present the depth and vision the Church has for marriage and family life and be able to do so in a most positive, persuasive and nonjudgmental way.”

Another is pro-life ministry. When he started with the diocese, Deacon Everett, who trained as an attorney, said the Supreme Court came close to overturning Roe v. Wade. He also remembered that once someone asked him about the March for Life, voicing the question, “Why are we still doing this? It’s a done deal.”

Deacon Everett’s response was, “Maybe it is, but as long as we’re here, telling the truth and doing it lovingly, we don’t know what effect it has.

Lastly, he said when he entered marriage and family ministry he was 25, and thought to himself, “all you need is a better argument.” Today the catechesis is better, he said, but the issues are even graver. There is also confusion among a generation of young people over gender ideology, and it affects faith in the Church.

“I see this as a moment of testing in the Church, with issues more serious than when I started 33 years ago.”

“Over the years I’ve learned a good argument and teaching, as beautiful as both may be, only go so far. In the end, the only thing that will save us as a nation is a personal encounter with Jesus and living out our lives as sons and daughters of God. We do that through faith in Jesus and baptism,” he said. “Only if people are renewed in heart and spirit will they want to embrace the Church’s teaching.”

“Until they get that encounter with the Lord all the talk won’t sink in and make a difference,” he continued. “The biggest thing I learned was, you have to help people encounter Jesus, encounter His love and power. Once they experience that, it gives them strength to overcome challenges and temptations and they’ll desire to know what it means to grow in relationship, to follow his commandments and what it means to be His friend. “

“Once you do that — everything is possible, but until you do that — very little can be accomplished. For many, unless they experience Jesus in their heart, they won’t be able to embrace Him with their minds and will.”