The countdown has begun, the day is drawing near. In less than 30 days, 18 men will enter the service of the Church as permanent deacons, serving the people of the Diocese of Fort Wayne-South Bend, as Bishop Kevin C. Rhoades pointed out at the Mass of Profession of Faith and Oath of Fidelity on Dec. 1 in the Ancilla Domini Chapel at Lindenwood Retreat Center. This is their last ceremonial step toward diaconate ordination, to take place on Jan. 7 at St. Pius X Church in Granger.

At the start of the Mass, Bishop Rhoades noted how appropriate it was that this ceremony was held in a chapel dedicated to Mary as the handmaid of the Lord, since service to God and others brought the 18 to the diaconate. 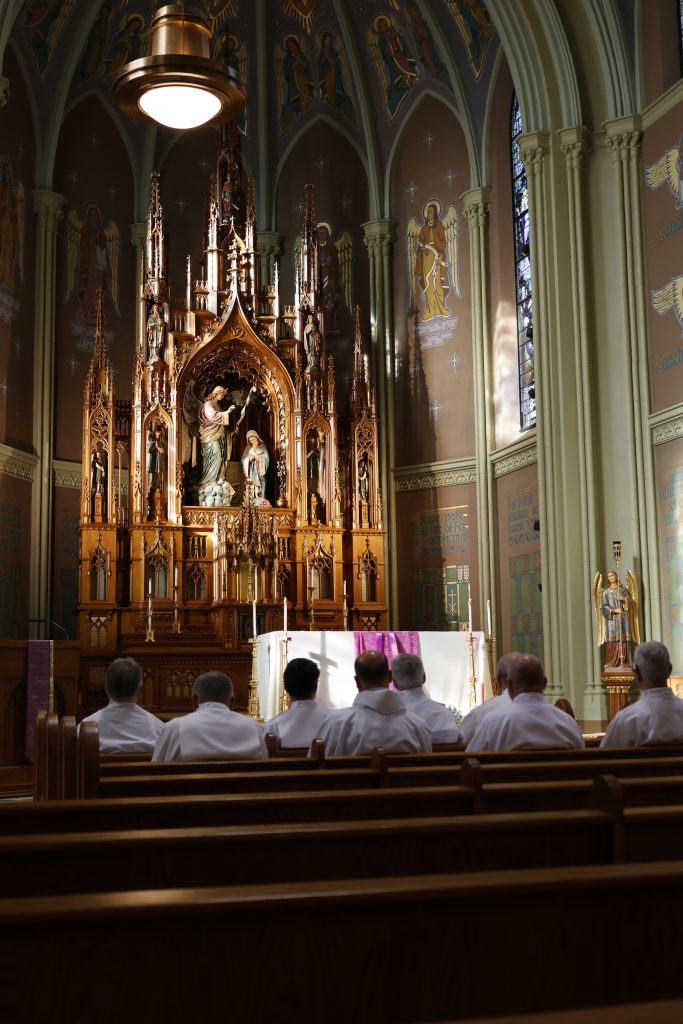 Photos by Jennifer Barton
Prior to the Mass of Profession of Faith and Oath of Fidelity on Dec. 1, several members of the large deacon class pray at Ancilla Domini Chapel.

The day’s Gospel reading from Matthew also fit the occasion, as Jesus relayed the parable of the man who built his house on rock. Bishop Rhoades focused on that for his homily. “To build on the rock means, first of all, to build on Christ, the Word of God, the Word made Flesh. He is the sure foundation for our lives and our ministry. Our ministry must not be about ourselves, but about Him. He is the only sure and sound foundation. He is our strength and our salvation.” 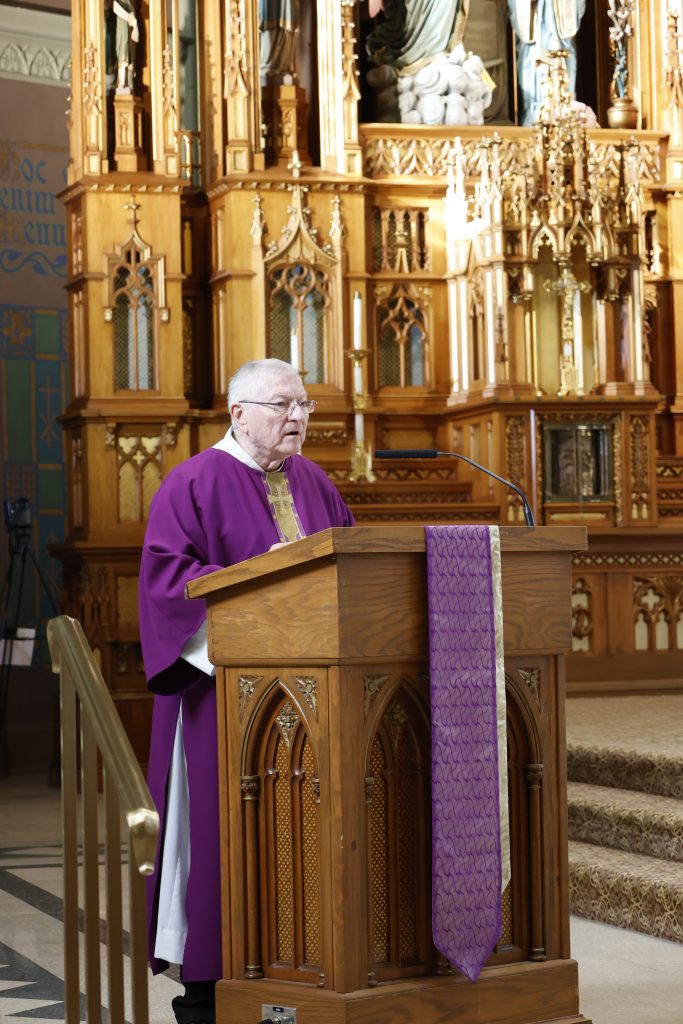 Deacon Stan LeMieux proclaims the Gospel at Mass. He has been instrumental in aiding the men in pursuing their vocations.

He cautioned the deacon candidates not to focus their diaconal ministry on themselves, like the man who builds a house on sand, but on Jesus and His Church, of which they were to become servants. “We cannot separate Christ and His Body, the Church. To build our lives and our ministry on Christ is to be in communion with His Body, the Church, which He built on Peter, whom He made the Rock, the visible foundation and center of unity of His Church.

“My brothers, you are on the threshold of ordination. I don’t think you would be here if you had not built your lives on Christ. I’m sure there have been storms in your lives already, but your houses did not collapse because of your faith in Christ. The Lord will continue to be your strength in whatever future storms may come as long as you continue to trust in Him and to stay close to Him. As deacons, I pray you will help all those whom you serve to also build their houses on the solid foundation of Jesus and His word. That’s what you are being called to do as servants of Christ and His Church.” 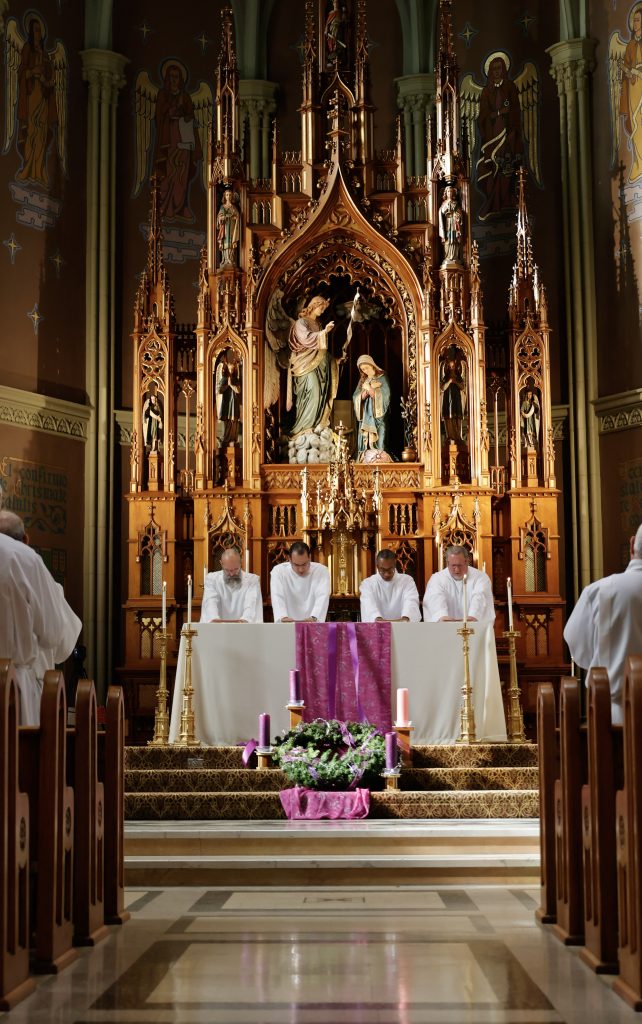 Jennifer Barton
Deacon Candidates Harry Verhiley, Orlando Miranda, James Summers, and Rob Lortie place their hands on the Book of the Gospels to give their Oath of Fidelity at Ancilla Domini Chapel on Dec. 1, for which Bishop Kevin C. Rhoades celebrated Mass. They are among the 18 men who have been studying for ordination to the permanent diaconate, with ordination approaching in January.

After the homily, the bishop asked the candidates to rise and together recite the Profession of Faith, a statement similar to the Nicene Creed spoken at Mass every day. Then, in groups of four (and two for the last group), the men approached the altar to lay their hands on the Book of the Gospels, from which they will proclaim the Word of God after ordination, and recite the Oath of Fidelity.

The deacon candidates come from all walks of life and all areas of the diocese. They have spent the last four years studying and preparing for the demanding life of service as a deacon. After their ordination, Bishop Rhoades will assign each of them to a parish within the diocese, though those assignments are still unknown at this time.

Once ordained, each of the 18 men will embark on a life of service and will be able to assist their priests at the altar at Masses, proclaim the Gospel readings and give homilies – for which Bishop Rhoades said they were well-trained – and perform other duties within the parish. 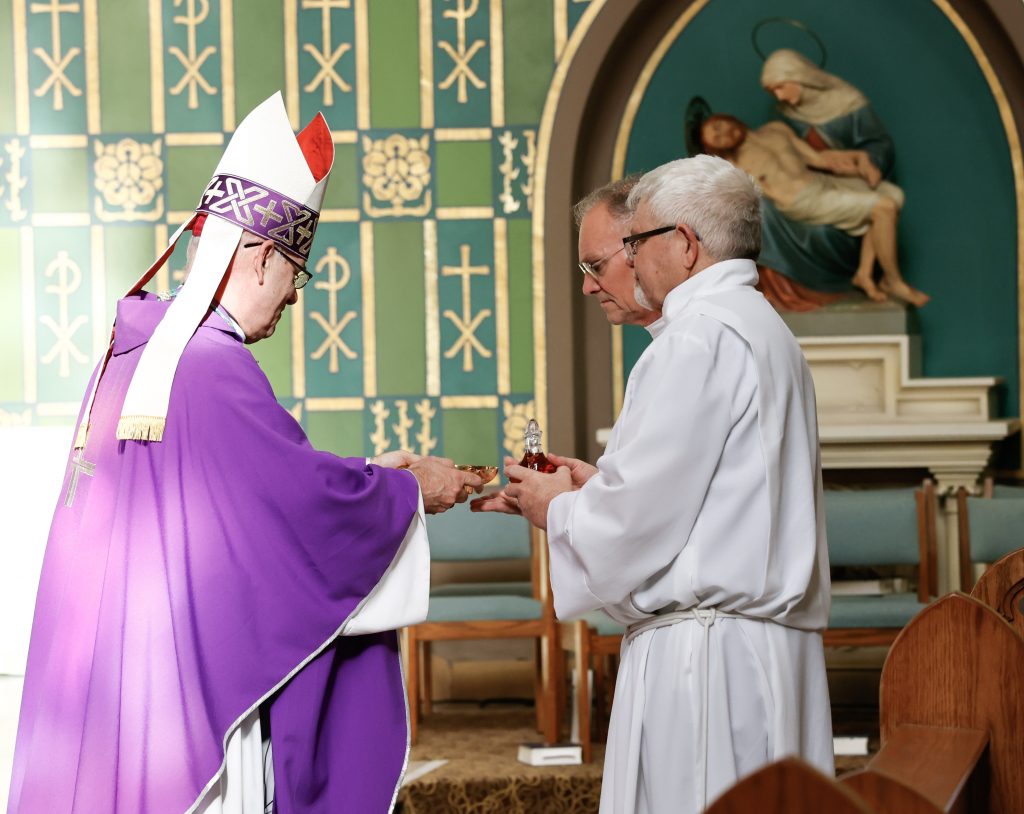 Two of the candidates bring up the gifts at the offertory.

Candidate Max Ortega of St. Patrick Parish in Fort Wayne said he does not feel nervous as the day approaches. “When we started the program, I was very nervous,” he said. He confessed that he had even driven to the classroom in Warsaw once or twice to ensure that he could get there and back home easily.

He was inspired by the two deacons at his home parish – Deacon Victor Sandoval and Deacon Humberto Vasquez – to enter the program himself. Now, with ordination so close and no knowledge of his future assignment, Ortega said, “It’s a big responsibility, but I can say I feel at peace.”

On the South Bend-side of the diocese, Andy Oross from Christ the King Parish said that he pursued the diaconate after his wife, the Religious Education Coordinator at the parish, and others invited him to explore the possibility. “I’m excited, very much.

“It’s been a good process, the formation, spiritual formation, and I’m excited to do it.”

Another candidate, Raymond Krouse, moved with his wife from Fort Wayne to their lake house around 10 years ago, making St. Gaspar del Bufalo in Rome City their home parish. He has thrived in two careers, retiring as a Senior Master Sergeant from 36 years of service in the 122nd Air National Guard, after which he found success in construction work before coming to the diaconate in his retirement.

Becoming a deacon “was not ever on my radar,” he shared. But then, “I just came to the point where I just knew I had to make a change; I didn’t know what it was.” After much prayer, he finally told the Lord that he would follow wherever he was led.

“And two weeks later, Father Bernard at the time asked me if I wanted to get into the diaconate and I didn’t even hesitate.”

The formation was difficult for a man who claimed little academic achievements prior to this, but he found that “Mother Mary up there helped me do some homework” and he received many affirmations that he was following God’s will, even after long, hard days of studying.

“I’ve been trained well, the training that they gave us was incredible; we had a lot of opportunities to learn, and I just kept going forward, trusting that I’d get through it,” he said.

Now he feels prepared for the task laid before him. “I need just the Holy Spirit.”