FORT WAYNE — In the first round of Catholic Youth Organization (CYO) football playoff action, two winners advanced to the championship round and a chance for the coveted trip to the diocesan showdown. St. Charles continued their win streak downing Central Catholic, 50-12, and St. Vincent hung on to top the Knights, 14-6.

Coach Kevin Thompson feels the 2015 season has been a very positive one for St. Vincent. The Panthers finished the regular season with a record of 4-2. Both losses came at the hands of the No. 1 seed, St. Charles. The team is led by a wonderful eighth-grade class with 18 of the 20 players returning from last year’s one-win season.

“They have worked hard each and every week to better themselves and have an opportunity to play in the CYO championship and a diocesan game. We achieved part of that goal today by beating a strong Knights’ team. Playing a team three times in one season is always hard,” detailed Thompson.

The Panthers started off with an opening drive that stalled at the 22-yard line. But the defense picked them up on the Knights’ first offensive play by forcing a fumble that was recovered by middle linebacker Jordan Wattercutter. After an impressive run around the outside by Thang Mantuang, St. Vincent got to the one-yard line where quarterback Ben Schreck punched in the score. St. Vincent’s second score came midway through the second quarter when Schreck hooked up with Griffin Eifert on a 46-yard play action pass. The Knights never quit fighting and scored with 1:19 left in regulation. They attempted an onside kick, but the Panthers were able to recover and run the clock out.

In the other matchup, Central Catholic struck first on a brilliant opening kickoff return for a touchdown resulting in the first deficit St. Charles has seen all season.

Cardinal Jaden Parnin immediately responded with a 65-yard return down to the Irish five-yard line. Hayden Ellinger finished off the drive to make the score 8-6, Cards, after the Trent Rider PAT. The Cardinals had two punt return touchdowns by their speedster Patrick Finley. Ellinger had a 60-yard touchdown run and Drew Lytle had a two-yard touchdown run. Braden Groves and Patrick O’Keefe had touchdown receptions.

Led by cornerbacks Parnin, Brenden Lytle and Jeren Kindig, the Cardinals’ starting defense has not yet yielded a point. Owen Sharpe, Lucas Krohn and Harrison Howe all had several tackles for losses and linebackers Devon Tippmann, Finley and Ellinger continued to create a steel curtain of defense for St. Charles.

With the CYO championship and a chance to be in the big game with South Bend on the line, Coach Sam Talarico insisted, “We will need to be ready. St. Vincent is very well coached and they are getting better each week. I hope we come out and play our best game of the year.” 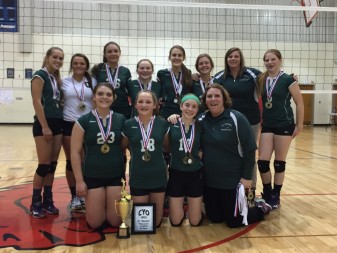 FORT WAYNE — Another season of volleyball has wrapped up and three new champions were crowned on Saturday, Oct. 17, at the St. Charles Hession Center in the 52nd running of the Catholic Youth Organization (CYO) volleyball tournament. As it is designed to do, this year’s seeded tournament pitted the top two teams in each league against each other for the championship. In each bracket, the league champ and No. 1 seed came out victorious, claiming a double set of medals for the league and tournament for the winners, which made for an entertaining morning of action to end the 2015 season.

First up, St. Charles downed St. Vincent, 25-13, 25-16, for the seventh-grade showdown to take home the Green League hardware. After helping out with the group as fifth graders, Coach Andrew Welch came back to the helm to lead the Cardinals to a 17-2 overall record and undefeated season in the CYO. Throughout the year, Welch stressed teamwork and intensity that paid off in the final matchup. In their only two losses of the season, which included a pre-season beating by St. Vincent, the Cardinals could not pull out the third game, but that was different when the two faced each other just a week ago for the regular season crown.

“We finally got over the hump and finished with a win,” explained a pleased Welch. His team carried that momentum into their final week of practice. “We sat in the empty gym with a blank poster board and I had each player write their definition of the word ‘teamwork,’” continued the life-long parishioner. “We have a team combined of natural talent and dedicated talent that stuck together as a team. They are just really good kids,” Welch summarized.

In the middle showdown of the day between the small school combined teams, the reigning champs for the past three years, St. Rose/St. Louis was taken out by the undefeated Squires from St. Joseph-Hessen Cassel, 19-25, 25-18 and 15-9, for the Blue League title. The Twins came out strong showing their athleticism the first game winning 25-19, but it was all Hessen Cassel after that claiming the second game, 25-18, and the final, 15-9.

A proud Squire Coach Troy Girod felt his steadfast girls came back the second game encouraging each other, talking more and pushing forward. The Squires are a great passing group — their focus this season and overall team strength.

“We dug deep and were able to pull off the win in an always-good matchup with St. Rose/St. Louis,” detailed Girod. Both teams capped off stellar CYO careers and listed eight eighth graders each on their rosters — most of whom have been battling it out on the court together since the fourth grade.

Finally, in the White League of all eighth-grade teams, the ladies from St. Vincent won 25-19, 25-21, in an amazing match up with St. Joseph, Decatur, to repeat their championship and continue their unbeaten streak in the CYO for the past two years. After losing to the Commodores as fifth and sixth graders in the championship, the Panthers took the title back in both 2014 and 2015 as seventh and eighth graders. In the final outing of their CYO careers, a pleased Panther Coach and mom, Deb Rednour explained, “We came into the game ready to play and mentally prepared. It was a great way to end the season.” 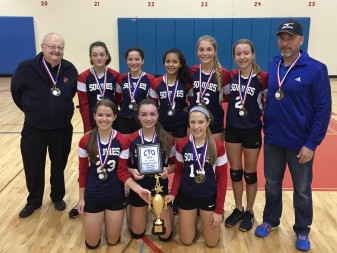 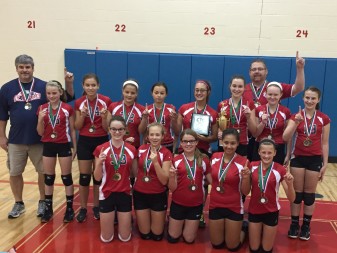