FORT WAYNE — St. Charles extended their win streak to 4-0 on the season with a 30-0 victory over a very hard-nosed JAT Knights squad.

The Cardinals gave up a first down for the first time this season in the third quarter when JAT’s No. 11 broke loose on a 70-yard run before being corralled by Patrick Finley on the five-yard line.

The Cardinals had a stellar performance from Finley who had over 200 yards in total offense and three touchdowns in addition to his touchdown saving tackle. Hayden Ellinger was all over the field on defense and recorded a safety along the way. The Cardinals’ final touchdown was on a 12-yard run by Jack Hartzog.

A pleased Coach Sam Talarico said, “I was very proud of our offensive line today. I thought they played their best game of the year. Defensively, Ellinger was all over the field. I wouldn’t want to coach against him.”

FORT WAYNE — At the mid-point of the 2015 Cardegle cross-country season, Coach Dan Kaufman’s squad has competed in seven meets. The boys’ varsity record is 34-43 and the junior varsity, 7-10. The girls’ varsity is 68-8 and junior varsity, 14-3. Most recently, the varsity Cardegles ran a split squad with 14 boys and girls competing at the 45th West Noble Invitational in Ligonier and the remainder of the team competing at the Huntington Catholic Invite.

The Cardegles will host their own invitational on Oct. 8, at Shoaff Park. The race will begin at 4:30 p.m. 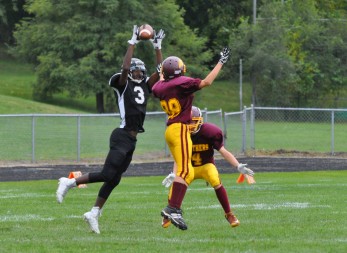 Blazers, Panthers square off in ICCL

MISHWAKA — Two charter members of the Inter-City Catholic League squared off as St. Matthew faced the Panthers of St. Anthony.

The first drive belonged to the
Blazers as a long run by Isau Gonzalez and a couple solid carries by talented back Christian Tate, brought the squad to the shadow of the goal post where quarterback Bryce Martens plunged in for the score.

The Panthers would respond with a shot of their own by promptly marching down the field with a 18-yard scamper to Paxson Campbell, tying the score 6-6 still early in the first quarter.

The Panther defense flexed its muscles and held, placing the ball firmly in the hands of their quarterback Luke Leonard who found Mitchell Floran for a huge pass play. Then he nestled the ball in the belly of running back Tyler DeBoe who raced for 19 yards and another score.

The Panthers were not finished by any means. On the next Blazer possession Floran took the ball from a would-be receiver and then followed with a 30-yard run from scrimmage setting up huge runs including a touchdown carry from DeBoe. Campbell completed the drive with a points-after kick increasing their lead, 22-6.

It appeared it would be more Panther magic as Blazer Tate bobbled a pitch and Kenzel Kelly hopped on it deep in enemy territory. But the black-clad warriors held their ground and stymied St. Anthony just before halftime.

The Blazers’ defense held tough the third quarter and into the fourth as their talented rivals struggled to find the success of the first stanza, but a 20-yard gallop by the Floran express changed the Panther drought making the margin 30-6 with 3:53 left in the game.

The team from St. Matthew however ignored the scoreboard and kept battling, scoring on the final play of the game on a touchdown run by Tate giving a defeated group a bit of resolve for their efforts.

“We were a bit flat at practice this week, and they got on us early,” expressed Panther Coach James DeBoe. “We responded well to their early success and I was very happy with the holes lineman Will Faulkner and Charlie Graham were able to open up for our skill guys.”

“We knew against a juggernaut like St. Anthony, we would have to come out and be ready to play. Our staff definitely thought we could give them a game,” commented Blazer Skipper Ben Domonkos. “Our quarterback went down early with an injury, but I was very happy that our offensive line — Joe Frechette, Alec Mishler, CJ Njuguna, Yordy Rios, Justin McCormick and Lawrence Daher — controlled the line against their talented front row.”

In other action, West Side Catholic defeated Osceola Grace, 24-0, as quarterback Derek Derda threw a touchdown pass to Ayden Clark and ran for two himself. Jon Underly added another score by racing 25 yards to the goal line.

Mishawaka Catholic remained undefeated as they shut out the Crusaders of Holy Cross, 16-0, behind runs from Josh Gill and Thaddeus Horvath and kicks by Miguel Ortiz.

The big matchup on the final week of play will be the two undefeateds, Mishawaka Catholic and St. Anthony at Marian High School’s Otolski Field at 1 p.m.