The Rekindle the Fire Diocesan Men’s Conference annually encourages participants to live out their Catholic faith with passion and authenticity. This one-day retreat, which also calls men to a deeper fraternity through participation in regular parish meetings, often features prominent speakers who are deeply in love with Jesus Christ and desire to see a more committed and unified Catholic Church.

This item is a large centuries-old crucifix, which had been prominently displayed for many years in Indianapolis’ St. Brigid’s Catholic Church until its official closing in 1994. Behind the body of Jesus, inscribed on the wood of the cross are the words: “He that perseveres to the end will be saved.” 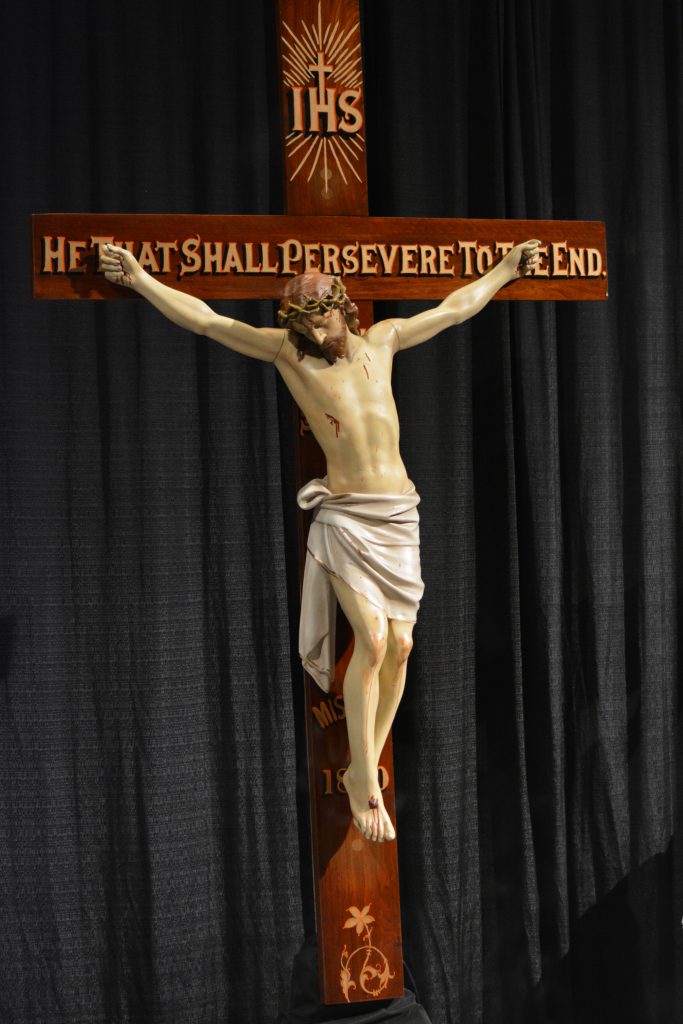 A crucifix brought from Ireland to the U.S. in 1880 by missionaries will lead men from across the diocese in prayer, reflection and worship during the Rekindle the Fire Diocesan Men’s Conference at the Century Center in South Bend Saturday.

Before coming to Rekindle the Fire, it was in the possession of Esther Pafford, a pious Filipino Catholic woman who for many years ran a large healing ministry out of her home in Indianapolis. From notes recorded in her personal journal, which also details personal mystical experiences, Pafford recounted that the crucifix was “the original pioneer cross brought to America in 1880 by Franciscan Missionary nuns from Ireland.”

Pafford shared it was “by the grace and in the plan of God” that she acquired the crucifix. She was put in touch with the parish office by the providential mistake of a telephone operator when attempting to contact her alma mater of St. Brigid’s College in Batangas City, Philippines. Instead she found herself speaking with Lillian Hughes, the parish secretary of St. Brigid Church in the heart of Indianapolis.

Upon learning that Pafford was interested in obtaining a small cross, Hughes encouraged her to consider taking the much larger 2-foot tall crucifix which stood in the soon-to-be demolished church. Seeing the crucifix, Pafford shared that she was drawn to it because of “the compassionate face of Jesus, [which] although sad, was reflecting His Love.” She also added that the words written on the cross were somewhat obscured by the corpus, potentially indicating that the two may have been paired together after its original construction. While Pafford initially objected to taking such a large crucifix home, Hughes joyfully insisted. When Pafford inquired of the price, she was further told “since it was blessed, it could not be sold.”

She then faced the challenge of removing the crucifix from its permanently mounted position in the church. After the first man she asked for help refused, Pafford prayed, “Lord Jesus, You showed me Your crucifix, I question where to put it in my house, [yet] I agreed to do it. But how, Lord?”

Once again, God provided. At that moment, she had the inspiration to call John Pozek, a construction worker at IUPUI whom she had met two weeks prior. Although she was uncertain he would be able or willing to help, he was providentially only about five minutes from the church at the time and agreed to meet her there. Immediately after, she contacted her husband to see if he could also assist, and learned that he had been granted an unexpected early release from work that day. “We seemed to be called to St. Bridget’s at that time,” she exclaimed.

Once it was removed and brought to her home, it became a center piece of her prayer room, where people would regularly gather for monthly healing services, Scripture discussions, and catechesis. Pafford led the group, which often included more than 50 people, and incorporated other holy items, including more than 20 relics, blessed oil and tears from a weeping icon of the Blessed Mother. These prayers invoked Christ’s mercy for physical, mental or spiritual healings, which at times brought miraculous results.

As Pafford aged, she hoped that the crucifix could still be put to good use within the Church. In 2017 her friend Maria Stebbins, a parishioner at Fort Wayne’s Our Lady of Good Hope, connected her with Barry Lamont, a volunteer leader with Rekindle the Fire. He told her that the conference would love to use the crucifix and thus have it shared with the parishioners of the diocese. Pafford agreed on the condition that it be kept somewhere where people could also regularly access it and show reverence. Lamont agreed, and after having it professionally restored, found it a home at the St. Felix Retreat Center in Huntington. There it remains year-round, other than its one-day appearance at the annual conference.

The crucifix first debuted at last year’s event, which offered Pafford a sense of joy and completeness regarding its new home. This reassurance providentially came less than a month before she passed away at the age of 81.

Reflecting the loving mercy and salvation of Christ for nearly 140 years, this crucifix uniquely fits the mission and design of Rekindle the Fire. As a prominent sign of God’s being “all-in” to save each human being from sin and death, it offers men a witness of healing, renewal, and persevering courage — culminating with the Eucharist — to go forth and serve in His example, throughout both their parishes and homes.

Father Jacob Meyer, pastor of St. Monica Parish, Mishawaka, and frequent host of the conference emphasized: “Scripture reminds us that the cross is always and ever-present to us because of the holy sacrifice of the Mass, which is the saving love of our Lord. So when we look at this crucifix, we realize He is always ready to have His blood flow down upon us and wash us clean.”

Father Meyer further emphasized that “at the core of it, every man has to look at the cross and realize it is his particular duty as a man to die for his bride. No matter their state in life, that is the goal of every man: to give our lives.”

All men high school-aged and older are invited to attend this year’s conference and explore how to deepen faith in Christ and emulate this “beautiful sign of God’s greatest love for us,” as Father Meyer described. To register, please visit: www.rekindlethefire.net. On-site registration also will be accepted.