“People whose homes were destroyed are staying in evacuation centers or in relatives’ homes away from the coastal areas,” Suryani told Catholic News Service Dec. 26. “Those in the evacuation centers are sleeping alongside families who still have homes, but who fear another possible tsunami while the Anak Krakatau volcano is still active.”

The tsunami hit Java and Sumatra islands after the eruption of Anak Krakatau, which lies in the Sunda Strait between the two islands. The Associated Press quoted a spokesman for Indonesia’s Disaster Mitigation Agency as saying the volcanic activity is believed to have triggered an underwater landslide and that a large chunk of Anak Krakatau’s southwest slope collapsed. This movement displaced a large volume of water, creating waves that raced toward the shores with little warning. 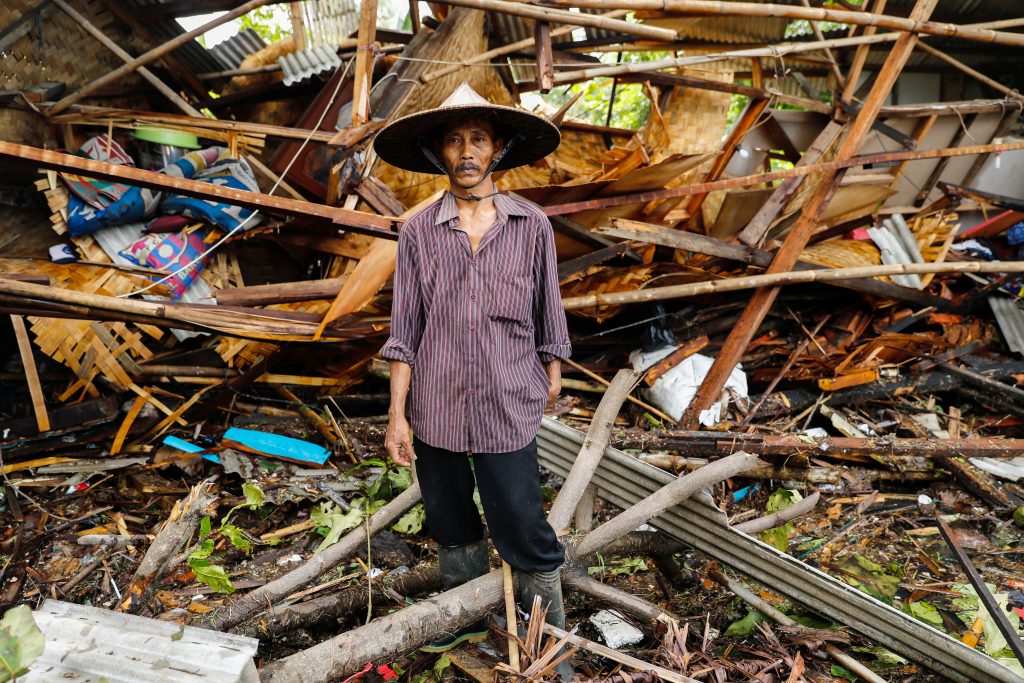 An Indonesian man stands in front of his destroyed house Dec. 24 after a tsunami hit two islands. Indonesian authorities asked people to avoid the coast in areas where the tsunami killed more than 400 people. (CNS photo/Jorge Silva, Reuters)

“This tsunami also reminds us of the tsunami that hit Aceh exactly 14 years ago today,” she said. That tsunami and preceding magnitude 9.1 earthquake off the coast of Indonesia killed 230,000 people in 14 countries.

“For many years since that 2004 disaster, we have trained local partner organizations in efficient and effective disaster response, and that investment has been critical in quickly getting the right help where it’s needed most,” Suryani said.

She said once needs were assessed, Catholic Relief Services would work with partners — including other members of Caritas, the Catholic charitable network — “to help people cope and recover.”

Catholic leaders offered prayers for Indonesians after the tsunami.

In the Vatican’s St. Peter’s Square Dec. 23, Pope Francis led an estimated 20,000 people in praying a Hail Mary for the victims and survivors.

Before leading the prayer, he told people gathered for the recitation of the Angelus that his thoughts were with “the population of Indonesia, struck by violent natural calamities that caused a serious loss of human lives, left numerous people missing and homeless and caused enormous material damage.”

“I invite everyone to join me in prayer for the victims and their loved ones,” the pope said. “I am spiritually close to all the displaced and all the people hurting, imploring God to relieve their suffering.”

The pope asked people to demonstrate their solidarity with those struck by the disaster and asked the international community to mobilize assistance.

“Our prayers and condolences go out to all those who have died or have been injured by the tsunami that struck Indonesia in the area around the Sunda Strait,” he said.

“As we prepare for the celebration of the birth of Christ, I ask all those in the Church here in the United States to pray for healing, consolation, and relief to our sisters and brothers suffering in Indonesia,” he said.