Hunger is something Americans often take for granted, tossing around phrases such as “I’m starving” in between meals.

In places such as Sierra Leone and Madagascar, the words are more than offhand remarks — they are constant companions.

Catholic Relief Services seeks to alleviate the plight of those living in extreme poverty and daily hunger. The organization has recently launched a new program called “Lead the Way on Hunger” to provide aid to those hardest hit by COVID-19.

COVID-19 has had economic impacts not only in the Diocese of Fort Wayne-South Bend but around the world, particularly in countries that had weak economies. In the Diocese of Fort Wayne-South Bend, the annual Lenten Rice Bowl campaign that would have supported hunger relief operations in the countries experiencing the worst ravages of hunger had to be suspended in many cases due to the closure of schools and the suspension of public Masses, but as the state of Indiana reopens there are opportunities to assist those nations that desperately need the aid of developed nations to keep their people fed. Catholic Relief Services partners with numerous dioceses for the annual Rice Bowl campaign, and the proceeds are shared between the diocese and CRS to continue the Church’s work of caring for the poor. 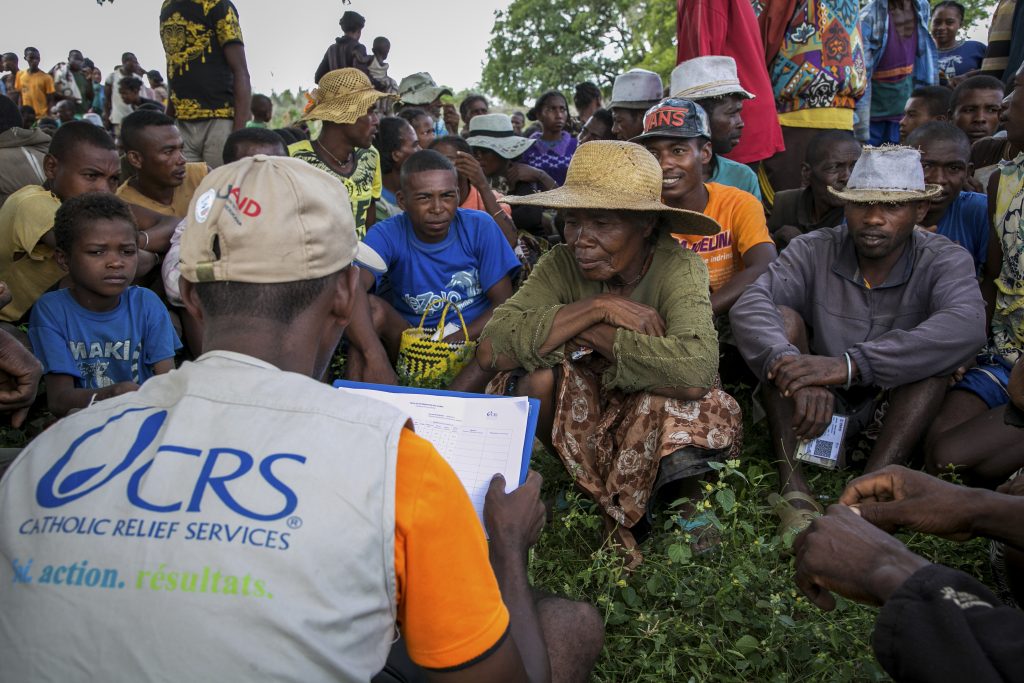 Photos provided by Nikki Gamer
A Catholic Relief Services worker in Madagascar is registering people in need for a food program. Madagascar has been plagued with droughts in the last few years, resulting in poor crop production and increased hunger. The organization has just launched the “Lead the Way on Hunger” program to combat hunger in the most affected countries.

Sean Callahan, president and CEO of CRS, stated, “There’s an urgency right now and that is what we’re called to do … The Holy Father has called all of us — he said we have two choices: We can either turn inward or reach outward.” He stressed the importance of the work that CRS is doing globally and how Catholics around the world can be a part of the mission given by Jesus Himself to feed the poor, particularly the severely malnourished children in underdeveloped nations.

Daniel Mumuni works for CRS as chief of party in the McGovern-Dole Food for Education and Child Nutrition Program in Sierra Leone. The McGovern-Dole program is a U.S. government-funded initiative that helps organizations such as CRS provide food to school children in poverty-stricken nations, feeding roughly 50,000 children who “come to school with no breakfast and no guarantee of dinner.” Mumuni grew up in northern Ghana and has a very “intimate, very personal experience of poverty.”

He shared a story that he personally witnessed in Sierra Leone in which a grandmother was negotiating the early marriage of her 9-year-old granddaughter, Fatima, simply because she struggled to feed the child during the COVID-19 pandemic. “CRS intervened to stop the marriage. I was there myself, and we provided resources in the way of food to this family,” Mumuni said. “That struck me a lot, as a father to a 9-year-old girl. To think that a 9-year-old, because of food insecurity, is being put into marriage, it is not only upsetting, but it evokes a sense of anger and urgency.”

Mumuni continued, saying that hunger goes beyond the growl of an empty stomach. “Far from the dictionary definition of hunger is actually the visual and dehumanizing effect it has on people. It strips people of their dignity.” 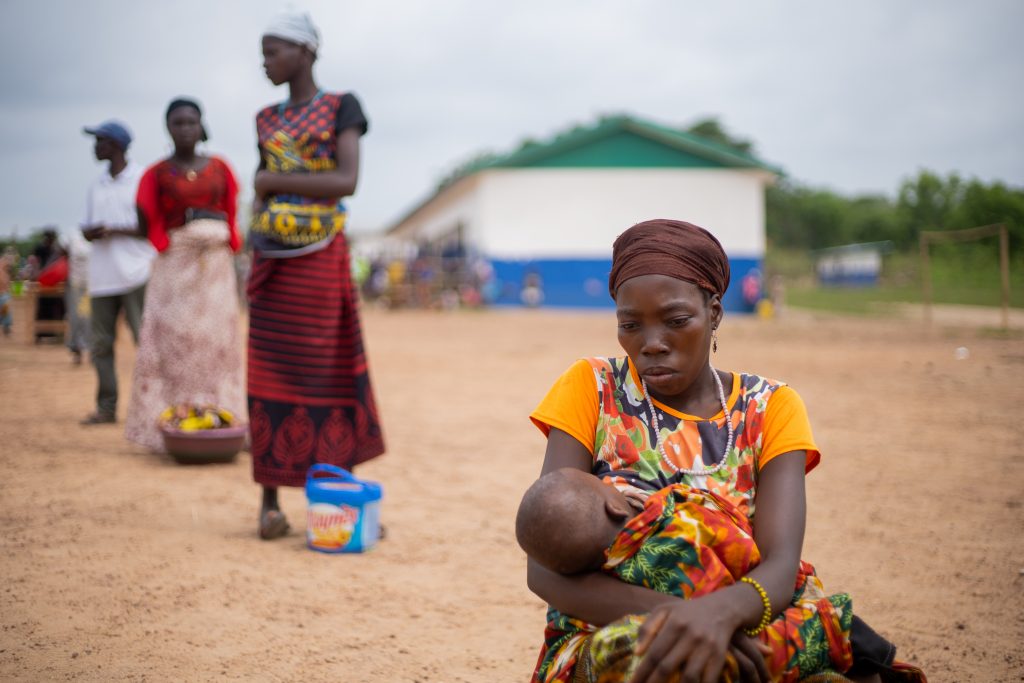 A mother waits for a Catholic Relief Services food distribution in Sierra Leone amid the COVID-19 pandemic, maintaining social distance from others in line. The food being distributed is part of the McGovern-Dole International Food for Education and Child Nutrition Program, distributed while schools are closed.

CRS strives to lessen the impact of poverty worldwide through food distribution, health education and by providing people with the means to grow and raise their own food. The organization seeks out the marginalized in communities that are often very remote and frequently forgotten. Oftentimes, CRS works in areas in which other Catholic organizations also serve, providing services such as founding Catholic schools. Missionaries such as the Sisters of Charity are very active in these communities as well.

The new campaign aims to lessen the negative impacts of the novel coronavirus on the poorest of the poor. Callahan seeks to gain the involvement of all faithful Catholics. Even small donations are welcome and will do much to alleviate hunger in underdeveloped nations.

Malnutrition in young children can affect their development, putting them behind their peers from an early age. Callahan sees hunger as an “assault on human dignity in families — to see mothers and fathers that can’t go out and work, that can’t provide the resources for the well-being of their families and children; it is one of the most heartbreaking things I have ever seen in my career at CRS.”

“Lead the Way on Hunger” began May 15 with a nine-day kickoff. The CRS website has information on ways to spread the word about the campaign and how to support the Global Child Thrive Act, currently in Congress, as well as make monetary donations. As of now, Catholic Relief Services does not have a proposed end date for the initiative, which will depend greatly on the length of the pandemic, though they are expecting it to continue for the rest of this year and next year. The immediate need for food is CRS’s first priority. There is also a long-term plan for continued outreach until 2030, where part of the focus of that is to help farmers acquire seeds and the knowledge of planting so that they can produce their own food, beginning with this year’s growing season.

When asked why people in America should concern themselves with hunger overseas, Mumuni replied, “For us as Christians, as Catholics, as people of faith, we are commissioned by this faith that we profess every day to be each other’s keepers, to love one another and more importantly, to feed the poor. After all, Christ said it Himself.”