“Today, we’re hoping that we not only open your ears, but that we open your hearts; that you’re not just learners, that you become disciples,” Bishop Dwenger principal Jason Schiffli said. “We’ve been very privileged and blessed to be considered a ‘platinum school’ with CRS because of our activities, things that you have done, what our faculty has done, the places that we have gone, and the people that we have affected. I could go on and on about the people that you have actually impacted by putting money into these little, cardboard boxes means a lot to the people on the other side of the world. This means a lot. Something that we take for granted, like water. Clean water being pumped up to the surface can cost a lot of money for a village that’s very remote.” 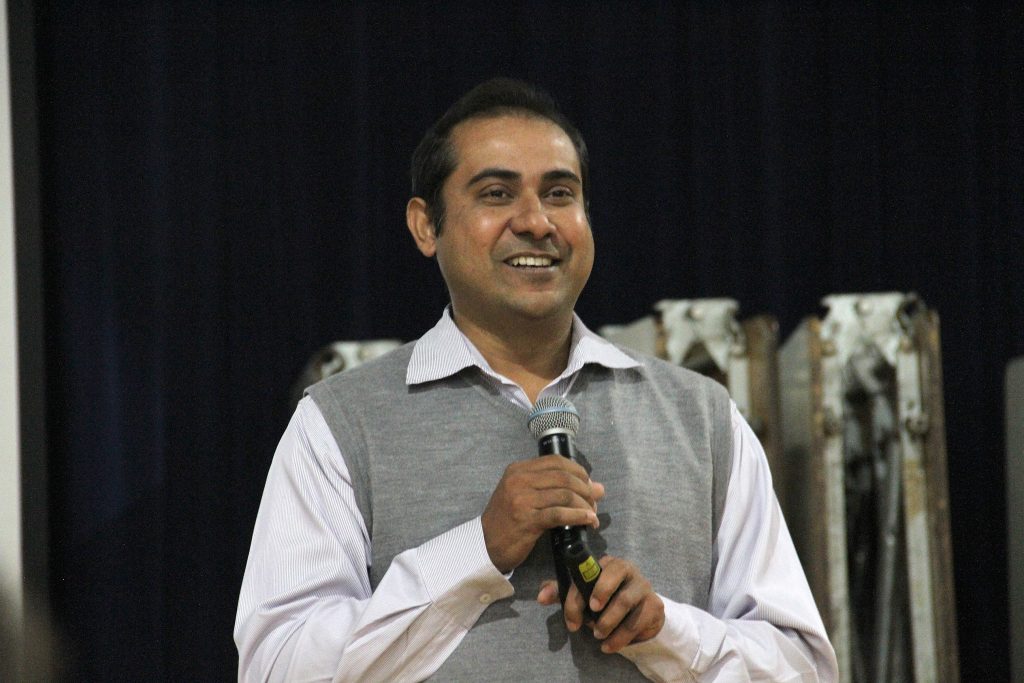 Following his introduction, Silva informed the students that they have participated in the story of his home country, Sri Lanka. He shared that since the end of the Sri Lankan Civil War in 2009, refugees who left the country have been coming back. CRS’ mission in Sri Lanka is to help the families who return to the country.

He shared the story of a farmer named Christyan. In 1993, Christyan and other villagers saw a package falling from the sky. Immediately they began to run in the direction of the falling object, believing at the time that the package could be food dropped by the government. However, when the package touched the ground, it exploded. Seventy-five people, many of them children, died as a result of the accident.

It was a turning point for Christyan. At the young age of 14, he decided to risk the treacherous journey to seek refuge in neighboring India. “For Christyan, it was a painful separation from his father, and his blind grandmother.” Christyan remained in India until the war came to an end in 2009. After his return, he met his wife, and together they had three children. 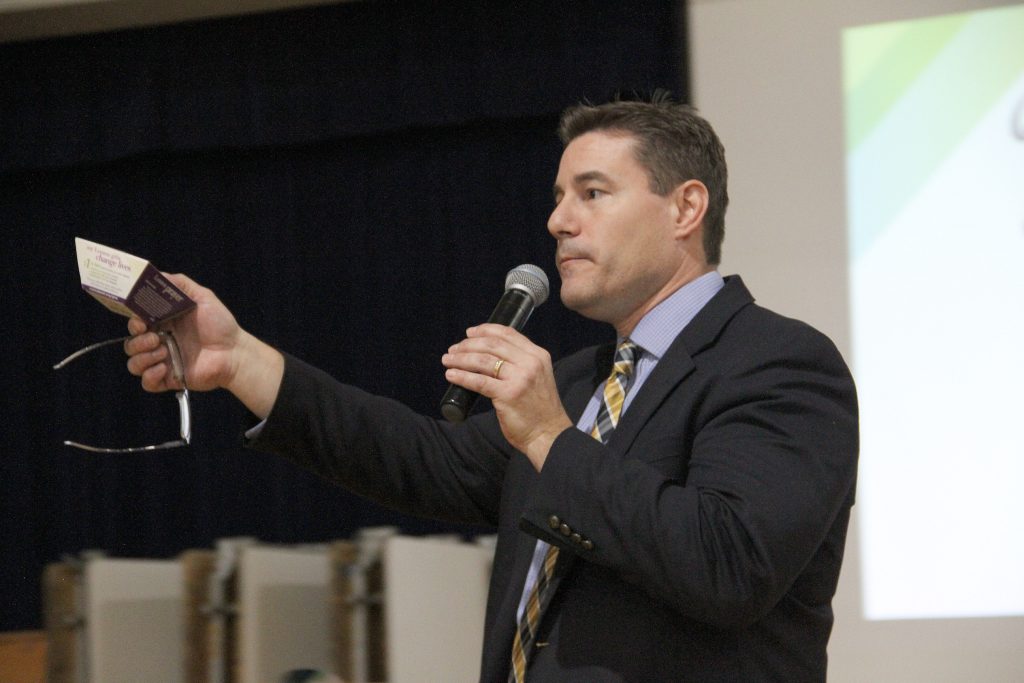 Principal Jason Schiffli encourages the students to donate to their classroom “rice bowls.”

Before he left, Christyan would single-handedly cultivate a 10-acre rice field. However, upon returning, he had “no hope, no spirit within him to move forward; just a destitute, doing some day labor, earning a small income which is not sufficient to feed his family. During this time, CRS started this project to help these families who come from India.”

CRS approached Christyan, who was receptive to receiving material goods, but at first, was hesitant to build a relationship with the CRS representatives. However, after repeated visits and compassionate aid, Christyan began to accept more help from CRS. Eventually, CRS would help Christyan build a business plan for his farm. Through CRS’ education, Christyan learned better methods of farming. With resources provided by CRS, Christyan sold enough crops during the first cycle to support his family. After taking the initiative during the second crop cycle to expand his land with the help of CRS, Christyan earned enough money to send his son to an English-speaking school.

“We give them a little help,” Silva said, “and now, Christyan is able to stand on his own two feet and make decisions for his family.” After showing students pictures of the smiling family, Silva continued: “Now Christyan is no longer a refugee. Now Christyan has become a lead farmer. So, everybody comes to him and asks, ‘What crops can we cultivate during this time?’” Thanks to the generosity of the students, Christyan rebuilt his life.

The donation boxes will be available in classrooms at both schools for the students to donate to CRS’ continued effort to assist those in need around the world.