Based in Boca Raton, Florida, the international Catholic charity has assisted the world’s most vulnerable people with $3.3 billion in total aid in more than 85 countries since its founding in 2001 by Cavnar and a small group of his colleagues. 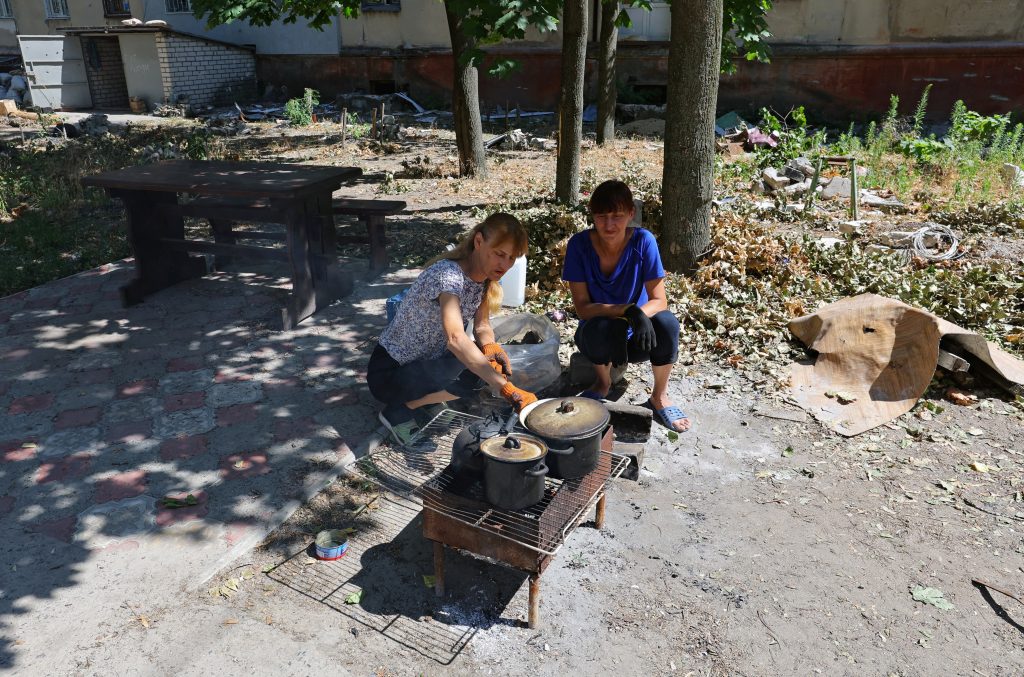 Women in Sievierodonetsk, Ukraine, cook food on a fire in a courtyard of an apartment building June 30, 2022, amid Russia’s invasion of the country. (CNS photo/Alexander Ermochenko, Reuters)

Its disaster relief responses have included building safe homes following devastating earthquakes in Haiti in 2010 and 2021, hurricane relief in places such as Guatemala, Honduras, Nicaragua and the Dominican Republic, and emergency food and medical supplies during the COVID-19 pandemic.

Since Russia’s Feb. 24 invasion of Ukraine, the charity has been helping Ukrainian refugees, namely across the border in Poland, and those internally displaced in Ukraine.

Most recently, Cross Catholic Outreach provided a cash grant, which funded 816,480 meals destined for these Ukrainians.

According to the U.N. High Commissioner for Refugees, since the war began on Feb. 24, more than 5.2 million refugees from Ukraine have been recorded across Europe as of July 4. Nearly 1.2 million are in Poland.

The agency estimates that 7.7 million people are internally displaced as a result of the conflict, which is equivalent to 17.5% of the entire population.

The meals funded by Cross Catholic Outreach were supplied in partnership with Feed My Starving Children, a Protestant organization based in Coons Rapids, Minnesota, and the biggest supplier of an enhanced rice meal called Vitafood, Cavnar told Catholic News Service.

The rice is enhanced with soy protein, vitamins, minerals, flavoring and dehydrated vegetables and has about 12 grams of protein per serving. A dry food, it can be transported easily and is prepared with boiling water by recipients.

This particular rice product is an excellent food that has been used in “situations of malnutrition”, but it also is very good for emergency situations, Cavnar explained. “It is fully nutritious and portable … and a good way to provide food that is economical.”

Pope Francis has sent Cardinal Krajewski, who heads the Office of Papal Charities, and Canadian Cardinal Michael Czerny, interim president of the Dicastery for Promoting Integral Human Development, as his envoys to bring relief, hope and encouragement to suffering Ukrainians.

Additionally, the charity is helping the Archdiocese of Przemysl, Poland, near the Ukrainian border, to help refugees at its receiving centers, where they are offered food, shelter and trauma therapy, while local partners help families secure living arrangements, employment and school for the children.

Cavnar said Cross Catholic Outreach is receiving steady contributions for its efforts to help Ukrainians from its regular donors, “who know us and trust us,” as well as from people looking to support a Christian agency doing such work.

The charity is helping the world’s needy because it takes Christ’s command to do so seriously, he noted.

“We’re the Church and Christ told us, ‘Whatever you do for the least of my brothers and sisters, you do for me.’ The Church is doing what she always does – respond to those in need,” Cavnar said.

Where it’s needed, “the Church is there,” he added.