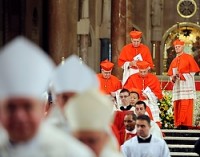 Members of the U.S. hierarchy process from the altar following a memorial Mass in honor of Vatican diplomat Archbishop Pietro Sambi Sept. 14 at the Basilica of the National Shrine of the Immaculate Conception in Washington. Archbishop Sambi served as nuncio to the United States from 2006 until his death July 27. (CNS photo/Leslie E. Kossoff)

WASHINGTON (CNS) — Archbishop Pietro Sambi, the late Vatican nuncio to the United States, “viewed his diplomatic vocation, as an ambassador of the vicar of the crucified one, as an extension of the invitation to mercy, reconciliation, unity, peace and life inherent in the Triumph of the Cross,” Archbishop Timothy M. Dolan of New York said Sept. 14.

Archbishop Dolan, president of the U.S. Conference of Catholic Bishops, was the principal celebrant and homilist at a memorial Mass for the Italian prelate at the Basilica of the National Shrine of the Immaculate Conception in Washington.

The nuncio, who died July 27 at age 73, “saw the cross in his varied diplomatic missions, in the poverty and oppression of peoples, in religious acrimony and war,” said Archbishop Dolan.

“We bishops of the United States will never forget the warm, personable manner in which he summoned us to be ambassadors of the healing and reconciliation won by Jesus on the cross, and be ever grateful for the tender way he unfailingly responded to our own needs.”

Dozens of U.S. bishops, many of them in Washington for a meeting of the USCCB Administrative Committee, concelebrated the Mass, along with nearly 80 priests.

More than 2,000 people, including Vice President Joe Biden and Miguel Diaz, U.S. ambassador to the Holy See, attended the Mass. The congregation also included representatives of the U.S. State Department, members of the diplomatic corps, representatives of other faiths, and the staff of the apostolic nunciature.

Sept. 14 is the feast of the Triumph of the Cross, which Archbishop Dolan used as a theme in his homily.

While Archbishop Sambi’s service in the Vatican’s diplomatic corps was important, Archbishop Dolan said, “what is of far more profound meaning and of everlasting consequence in his life was that the cross of Christ, triumphant over sin, Satan, and death, was on his heart.”

“He saw the cross in his varied diplomatic missions, in the poverty and oppression of peoples, in religious acrimony and war,” Archbishop Dolan said in a prepared text of his homily. “He saw his diplomatic mission as an encouragement of the most noble virtues illuminated by the light of the cross: trust, honesty, and unity.”

Archbishop Dolan recalled a time when, as archbishop of Milwaukee, he was vesting with Archbishop Sambi — still relatively new to his U.S. posting — and other bishops for the installation Mass of a new Wisconsin bishop.

“He asked me if we bishops here in America wore our pectoral cross on the inside or outside of the chasuble,” Archbishop Dolan said. “I replied ‘Eccellenza, as a matter of fact, all the bishops will watch to see what you do and then follow suit!’

“His eyes sparkled and he said, ‘Then I will keep changing it back and forth to confuse everybody.’ Then he commented, ‘As long as it is over our heart, it does not really make any difference.'”

In addition to Catholic clergy and diplomatic dignitaries, representatives of many other faiths were at the memorial Mass, including representatives of the Episcopal Church, the United Church of Christ, the Greek Orthodox Church, the Armenian Apostolic Church, the American Jewish Committee, the Islamic Circle of North America, the International Society for Krishna Consciousness and the World Sikh Council.

In remarks at the beginning of Mass, Cardinal Wuerl said the late archbishop had “faithfully carried out the work of the Lord in this country.”

At the time of Archbishop Sambi’s death, Cardinal Wuerl noted that everyone in the Washington Archdiocese felt a particular bond with him, because the nuncio and the archdiocese had worked together to welcome Pope Benedict XVI when he visited in 2008.

Msgr. Jean-Francois Lantheaume, charge d’affaires at the apostolic nunciature, was among the concelebrants at the Mass. Addressing the congregation at the end, he offered thanks to the State Department and the diplomatic corps for the “concern and respect” shown to the nunciature after Archbishop Sambi’s death.

Speaking in several languages, he noted that the large turnout for the Mass was “a wonderful sign of respect for that great diplomat.”

Directly addressing nunciature staffers in attendance, Msgr. Lantheaume said “in these difficult days, you have done your job very well — the nuncio should be proud of you.”

Contributing to this story was Richard Szczepanowski.