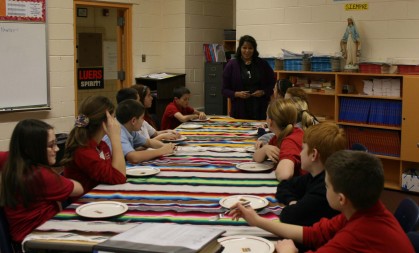 Spanish teacher Cristy Jordan instructs St. Joseph-St. Elizabeth sixth graders on the etiquette of the dining table. She teaches Spanish to fifth- through eighth-grade students at the St. Joseph campus in Fort Wayne.

FORT WAYNE — Cristy Jordán is a junior high teacher at St. Joseph-St. Elizabeth Ann Seton School in Fort Wayne and with her Latino heritage and educational experience she brings the passion of generations past to the work she loves. Currently she teaches Spanish to fifth- through eighth-grade students and is also the school’s language progress provider. “I assess students with dual languages and watch their progress,” says Jordán.

Jordán, who has deep roots in both the Latino and American cultures, brings her spunky personality and intellect along with a familiarity of the Latino community to the table that makes teaching a perfect fit for this young mother of two. Surprisingly, though education was paramount within her own family, she didn’t start out with education in mind as her career of choice.

A Fort Wayne native, Jordán was born the fifth of seven children to Elisa and Cristobal Jordán, who also fostered many other children along the way. When asked about her family Jordán becomes animated with pride as she recalls the history of her Latino/American heritage.

Her mother, Puerto Rican born Elisa Torres-Jordán, came to America in 1955 as a young girl, sent by her parents, as they would all of their children, with two of her 10 siblings in search of a better life. The 15-year-old spoke no English, but was determined to earn the highly coveted Catholic education.

Elisa found herself at Central Catholic High School pleading with then-Father J. William Lester, principal of the school at the time, for a chance to earn her diploma there. After much deliberation about language barriers, Father Lester eventually admitted Elisa who earned her diploma with valedictorian status.

She eventually met and married Cristobal Jordán, who also immigrated from Puerto Rico. And at age 62, after all her children were raised, Elisa returned to school to earn a teaching certificate with which she was able to work in the preschool field.

The Jordán family attended St. Therese Parish and School in Fort Wayne, where Elisa and Cristobal are still members. And though Jordán says, “I had a wonderful experience,” she notes that racial tension sometimes colored her siblings’ experience.

Several of the Jordán children attended Canterbury High School in Fort Wayne on athletic scholarships, in part due to Elisa’s urging. Jordán recalls her high school years as rich with multi- cultural academic and athletic experiences, and says, “They pushed me for excellence.”

Following graduation Jordán was off to Sweetbriar College, a small women’s college in Virginia, to study a double major of Spanish and sociology. Her goal was to use her skills and talents at the FBI. However, Divine Providence had other plans, and after graduating in 1997 and doing social work in Fort Wayne for a year, she met her future husband Joe Meade. The couple married in 2000 and moved to Detroit where Jordán taught Spanish at a charter elementary school in the heart of the city. Jordán says, “That’s when I knew I loved teaching.”

The next four years saw Jordán teaching English as a Second Language (ESL) in the Dearborn Public Schools to adults and high school-aged students and was involved in an adult refugee (ESL) program.
Again Divine Providence would light her path, when in 2005, Jordán’s ESL position was phased out, and she and her husband moved back to Fort Wayne. After meeting Father Tim Wrozek, pastor of St. Joseph Parish, Jordán agreed to start a ESL program at the church.

“I learned the population needs of Fort Wayne,” says Jordán. After two years with the ESL program, Jordán took time off to give birth to her first child, Nya in 2006 and in 2008, her second, Riddick.
Once again Jordán saw a need in the Latino population and returned to teaching, this time at St. Joseph-St. Elizabeth Ann Seton School, where she taught kindergarten through fourth-grade Spanish and English as a New Language (ENL) at the St. Elizabeth campus. This year Jordán moved to full-time teaching at the junior high level at the St. Joseph campus.

So many cultural differences are evident in the languages, says Jordán. She adds that Catholic identity is what Latino families long for and their language offers a daily connection to God with a firm foundation in family. Jordán believes cultural education must be family-wide.

“The adults can learn religion through their children’s education,” says Jordán. “I need to get involved so we can make that change. I enjoy connecting faith with education.”

Jordán’s enthusiasm for Catholic education is fed by her desire that all children have the opportunity she was given. And her understanding of the Latino community will assist her in creating an educational environment where the adults in the Catholic families will be catechized by their children attending Catholic schools, much like her own father was.

Jordán says passionately, “If my mom hadn’t had her opportunity, I wouldn’t be who I am. Everyone should have access to a Catholic education. I want to be part of what makes that happen … I feel like I have to be that voice.”

Jordán is currently taking courses to strengthen her teaching credentials and has been invited to attend the Alliance for Catholic Education (ACE) Leadership program offered by the University of Notre Dame. Upon completion she hopes to use her skills as a principal in a Catholic school in the area.