VATICAN CITY (CNS) — Defending the weak or hopeless and becoming a servant to those most in need is the best promotion one can ever receive, Pope Francis told new and old cardinals.

“None of us must feel ‘superior’ to anyone. None of us should look down at others from above. The only time we can look at a person in this way is when we are helping them to stand up,” he said during a ceremony in which he elevated 14 bishops and archbishops from 11 different nations to the College of Cardinals June 28.

The formal ceremony in St. Peter’s Basilica began with Pope Francis, wearing a miter and carrying a pastoral staff of retired Pope Benedict XVI, leading a procession of the soon-to-be cardinals — in their new red robes — while the choirs sang, “Tu es Petrus” (You are Peter).

Chaldean Patriarch Louis Raphaël I Sako of Baghdad approached a podium to give thanks on behalf of all the new cardinals who have been “called to serve the Church and all people with an even greater love.” 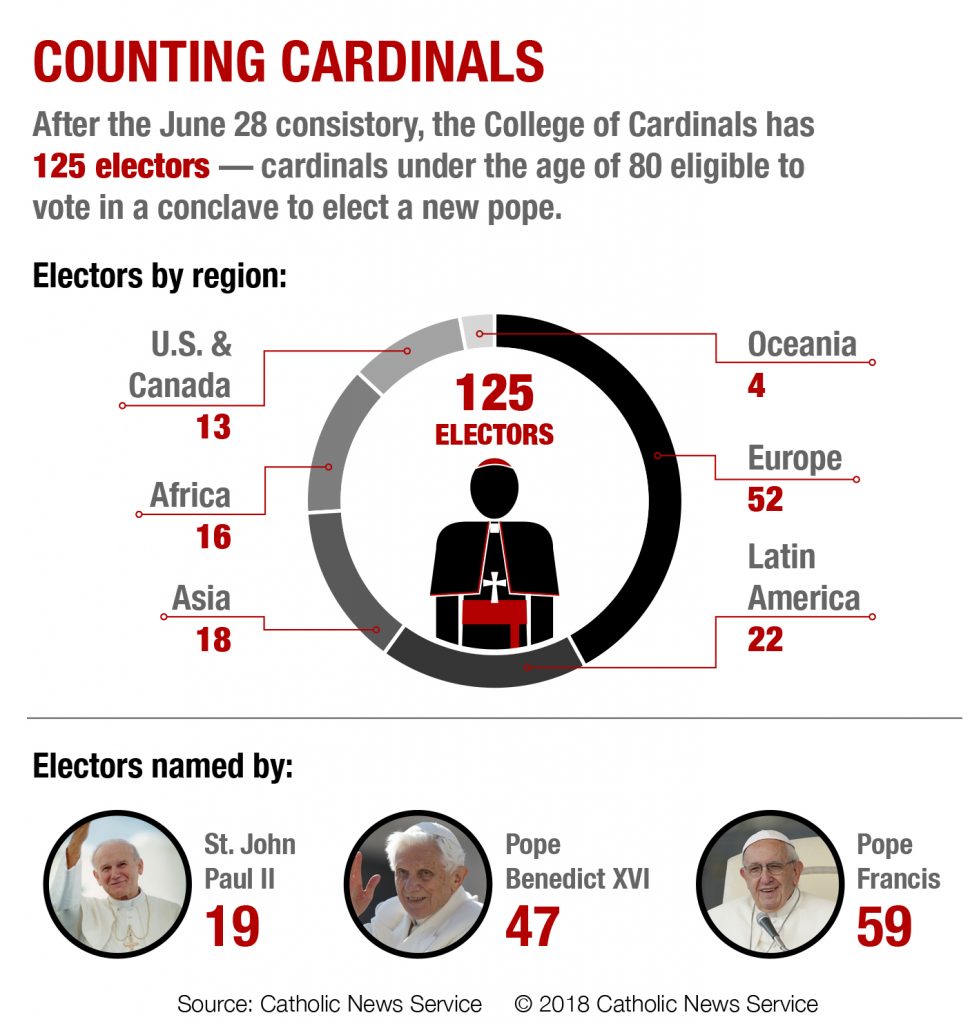 After the June 28 consistory, the College of Cardinals has 125 electors — cardinals under the age of 80 eligible to vote in a conclave to elect a new pope. (CNS graphic/Caroline Lindsey)

The 69-year-old patriarch, whose country has lost an estimated 1 million of what had been 1.5 million Christians over the years of war, violence by extremist militants and economic insecurity, thanked the pope for his special attention to the plight and struggle of “the tiny flock” of Christians throughout the Middle East.

“We pray and hope that your efforts to promote peace will change the hearts of men and women for the better” and help the world become a more “dignified” place for all people, the patriarch said.

Being made a cardinal, he noted, was not a prize or a personal honor, but an invitation to live out one’s mission more firmly dedicated to “the very end,” even to give one’s life, as symbolized by the cardinal’s color of red.

Their mission, the pope said in his homily, is to remember to stay focused on Christ, who always ministered and led the way, unperturbed by his disciples’ infighting, jealousies, failings and compromises.

On the road to Jerusalem, as the disciples were locked in “useless and petty discussions,” Jesus walks ahead yet tells them forcefully, when it comes to lording authority over others, “it shall not be so among you; whoever would be great among you must be your servant.”

What good is it, the pope asked, to “gain the whole world if we are corroded within” or “living in a stifling atmosphere of intrigues that dry up our hearts and impede our mission,” including those “palace intrigues” in curial offices.

“But it shall not be so among you,” the Lord says, because their eyes, heart and resources must be dedicated “to the only thing that counts: the mission,” the pope said.

Letting go of sins and selfishness means “growing in fidelity and willingness to embrace the mission” so that “when we see the distress of our brothers and sisters, we will be completely prepared to accompany and embrace them” instead of being “roadblocks … because of our short-sightedness or our useless wrangling about who is most important.”

“The Church’s authority grows with this ability to defend the dignity of others, to anoint them and to heal their wounds and their frequently dashed hopes. It means remembering that we are here because we have been asked ‘to preach good news to the poor … to proclaim release to the captives and recovering of sight to the blind, to set at liberty those who are oppressed,” he said.

“Dear brother cardinals and new cardinals,” the pope said, the “Lord walks ahead of us, to keep reminding us that the only credible form of authority is born of sitting at the feet of others in order to serve Christ.”

“This is the highest honor that we can receive, the greatest promotion that can be awarded us: to serve Christ in God’s faithful people. In those who are hungry, neglected, imprisoned, sick, suffering, addicted to drugs, cast aside,” he said.

Pope Francis then read the formula of creation and the names of all 14 cardinals; each new cardinal recited the creed and took an oath of fidelity to Pope Francis and his successors.

One by one, each cardinal went up to the pope and knelt before him. The pope gave them each a cardinal’s ring, a red skullcap and a three-cornered red hat. The assembly applauded for each new cardinal as the pope stood and embraced each one, in some cases, speaking to them briefly and privately.

With the new members, the College of Cardinals numbered 226, with 125 of them being cardinal electors — those under 80 and eligible to vote in a conclave. With this consistory, Pope Francis has created almost half of the voting cardinals.

The 14 cardinals who received their red hats from the pope were Cardinals:

— Luis Ladaria, 74, prefect of the Congregation for the Doctrine of the Faith.

— Angelo De Donatis, 64, papal vicar for the Diocese of Rome.