THRISSUR, India (CNS) — Amid thousands dying daily of COVID-19, even in rural areas of India, the pandemic has taken a heavy toll on Church leaders.

Dozens of priests, scores of nuns and hundreds of laypeople have died during the second surge since mid-April.

Bishop Basil Bhuriya, 65, of Jhabua became the first serving bishop victim of COVID-19 when he died at St. Francis Hospital at Indore May 6. Retired Archbishop Antony Anandarayar of Pondicherry died of COVID-19 May 4.

“We lost a young bishop ordained only five years ago,” Archbishop Leo Cornelius of Bhopal, who heads the Madhya Pradesh Council of Catholic Bishops, told Catholic News Service May 7 while returning from the funeral of the Bishop Bhuriya. 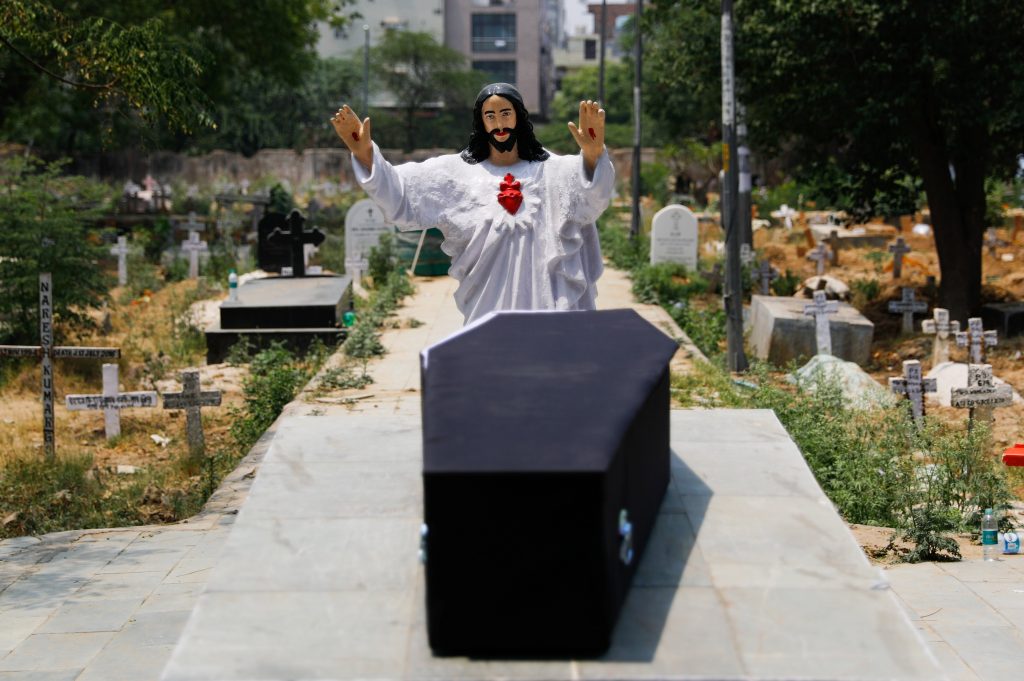 A statue of Christ is pictured over the casket of a person who died after contracting COVID-19 before the burial at a graveyard in New Delhi April 29, 2021. (CNS photo/Adnan Abidi, Reuters)

Though Bishop Bhuriya had been treated in different hospitals for more than three weeks and had tested negative for the virus, Archbishop Cornelius said, he had a problem with oxygen levels and died of a heart attack due to the impact of COVID-19.

“We could not take his body to Jhabua (100 miles away) and so, he was buried at the (Divine Word) cemetery near Indore,” he added.

“I have lost one of my young priests, two nuns and over three dozen Catholics,” Archbishop Cornelius said of the Bhopal archdiocese, which has more than 15,000 Catholics. “Most of them died (because of) failure to get hospital admission on time and erratic oxygen supply in the hospitals.”

Among the dead were former vicar generals and provincial superiors of different congregations and nuns working in Catholic hospitals and other institutions. 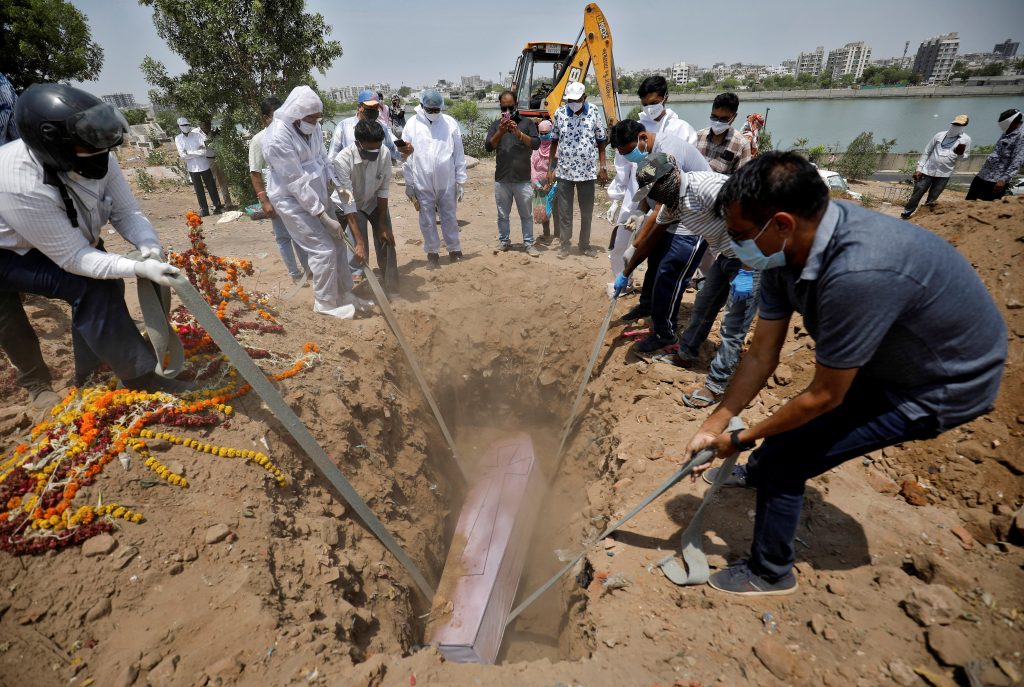 People lower the body of a man who died of COVID-19 into a grave at a cemetery in Ahmedabad, India, May 3, 2021. (CNS photo/Amit Dave, Reuters)

The Archdiocese of Thrissur was stunned when half a dozen retired priests died of COVID-19 May 1-2 weekend. All of them were infected at the archdiocesan convalescent home, situated in the compound of archdiocesan medical college.

Redemptorist Father Mathew Abraham, director general of Catholic Health Association of India, told CNS, “Due to shortage of oxygen and ventilators, several of our hospitals are not able to treat COVID patients.”

“Some doctors and nurses are not willing to work (in) the COVID ward. Hence sister-doctors     and sister-nurses are working throughout the night and day,” said the priest, who had been hospitalized and has recovered from COVID-19.