When it comes to educating young people on the truths of the Catholic faith, who better to teach them than someone who has spent years steeped in the faith?

St. Joseph Parish in Bluffton is an old parish, dating back to the 1870s, but it has not had a school in decades. The parish does have a large amount of physical space, however. 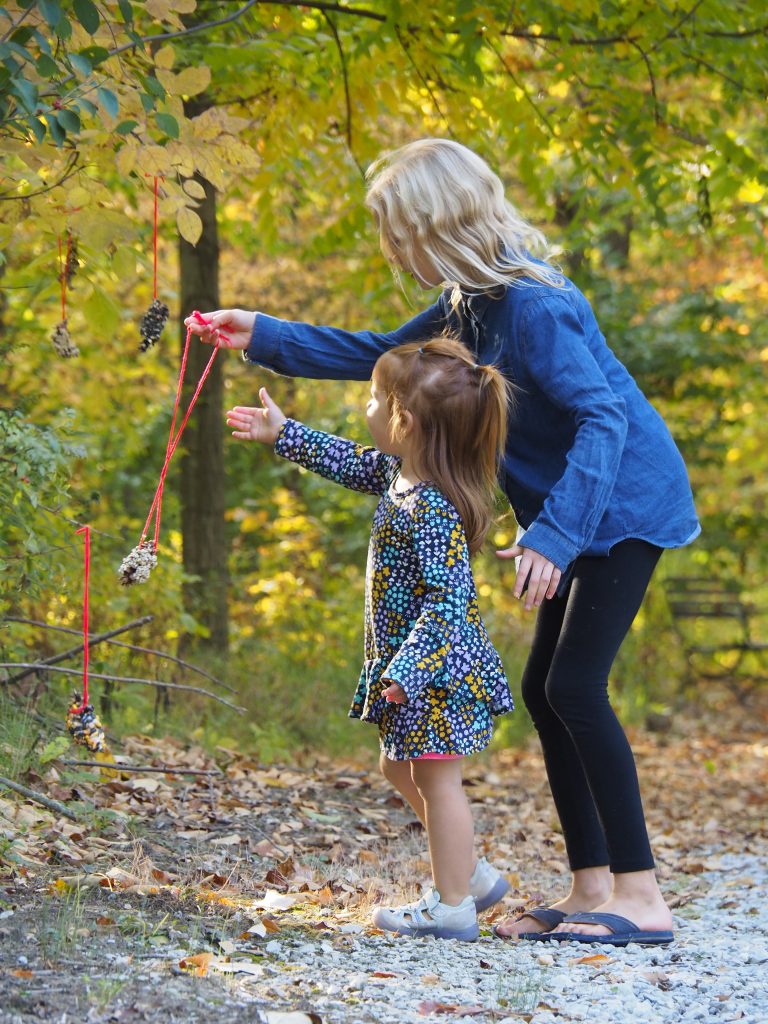 Photos by Jennifer Barton
Age is no factor when it comes to learning, and here a young student hangs a pine cone birdfeeder on the rosary path located on the grounds of St. Joseph Parish in Bluffton. The indoor and outdoor space is being utilized this year for home-schooling children of all ages.

Parishioner Lauren Andrews approached pastor Father David Violi early in the year about renting a little of that space during the week to a local home school co-op. Some families at St. Joseph already home schooled their children, but with the COVID-19 pandemic trudging toward another school year, more families were beginning to look to the option. So when Andrews and the priest spoke about it again a couple months ago, he did more than simply agree: As the new school year began, he took on role of teacher for a classroom of the homeschool students.

“We’re seeing with COVID … more people might be choosing to home school. So if they’re going to do that, let’s offer more resources for them to do that,” Father Violi felt.

With Life Adventures providing many of the traditional educational classes like math, English and science, he felt that the parish could help supplement the religion curriculum parents had chosen for their children.

“It was a nice thing we could offer, an overarching thing; an intro to theology. It was kind of a natural topic.” 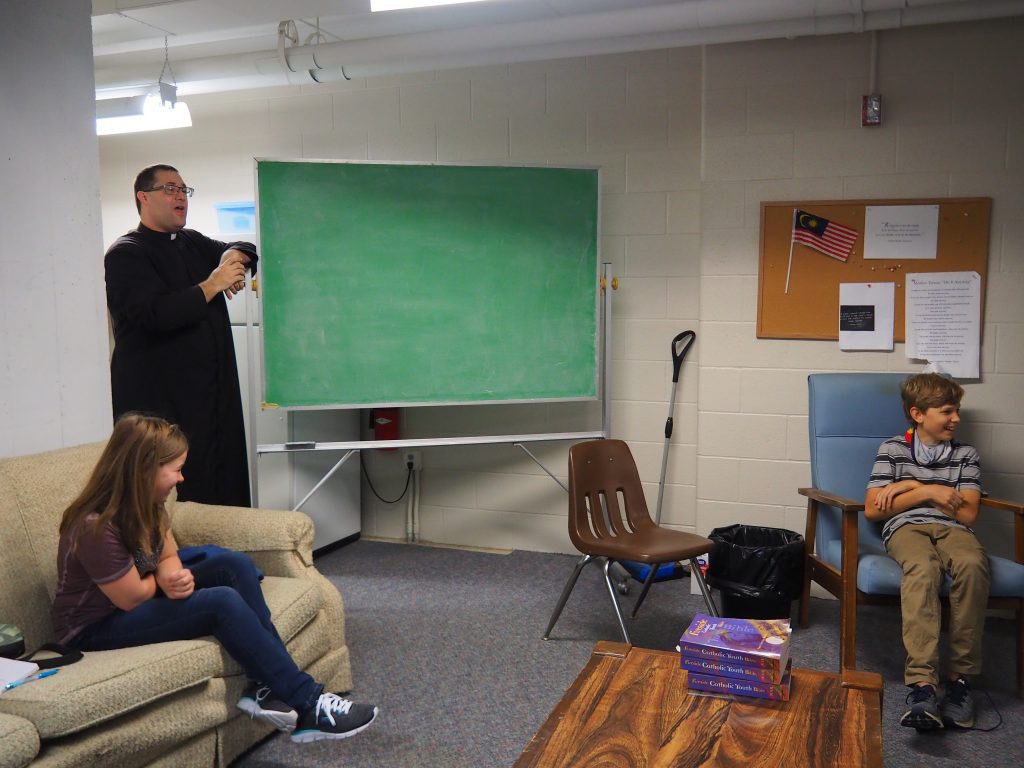 Father David Violi undertakes teaching an Introduction to Theology class to middle and high school students, engaging and challenging them in their knowledge of the faith.

From that idea was born the Intro to Theology class for teens led by Father Violi. At the same time, their younger siblings can attend a “Saints, Seasons and Snacks” class lead by homeschooling moms in another part of the building. Morning Mass was moved from 8 a.m. to 8:30 a.m. to accommodate homeschool families who wish to attend prior to the new religion classes.

After the hourlong theology class, students can then attend their chosen Life Adventures classes.

“We’ve had so many families say we’ve needed this for so long,” Andrews stated. She described the parish as “well set up for home-schooling classes,” including both religion lessons and standard curriculum.

In addition to the indoor classroom space at St. Joseph, the parish also has a charming outdoor rosary path that the “Saints, Seasons and Snacks” class utilizes to combine faith and nature lessons.

Christy Gunkel is a homeschooling mom from nearby St. Aloysius in Yoder. She brings her children to St. Joseph for both the new religion classes and the Life Adventures programs. 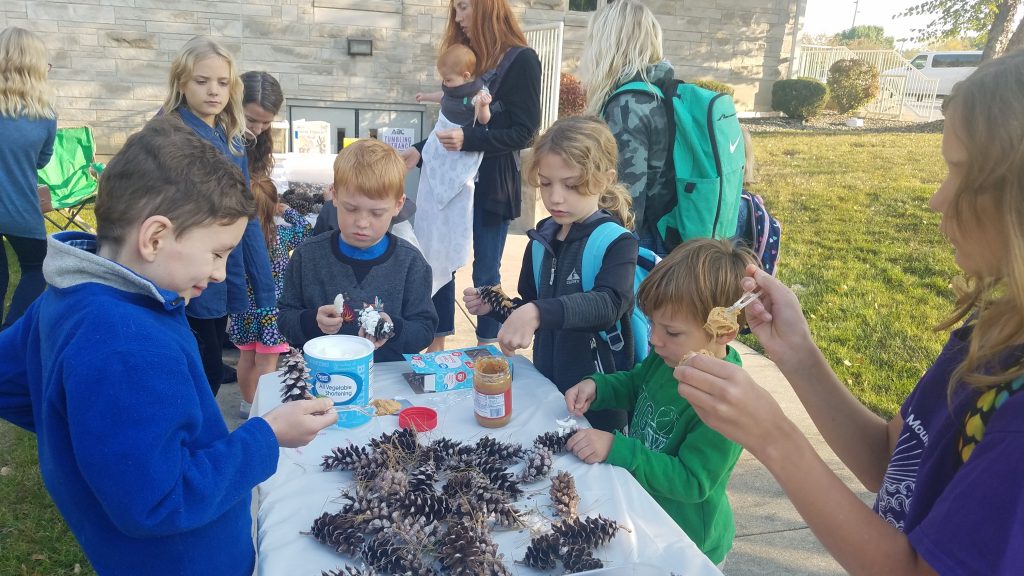 She said the timing “was divine providence.” She described Father Violi as “a vibrant young priest” who has supported the efforts of home-schooling parents in his parish and the surrounding Catholic community.

Gunkel believes that the parish has strong home school families that need the extra support.

“In many cases, I’m finding that this is an opportunity to have my high schoolers participate and have some talks about the faith,” she stated.

While growing in faith is the purpose of the class, “the biggest goal is to spread the Gospel to the community,” Andrews added. “It’s a great outreach; an opportunity for them to see that we’re partners in the community.”

She believes that some families from the Bluffton area -— “people who never step foot in a Catholic Church” — might bring their children to Life Adventure classes. From there, those students and parents gain some exposure to Catholicism and witness the cooperation between the Church and the world.

Bluffton is a small town with a Catholic population of only 3%, according to Father Violi. That is why giving young people a solid foundation in the Catholic faith is so critical.

“It’s that concept that our kids need to be prepared, they need to be educated. … Here it’s a very necessary aspect in our community. They’ll get a lot of questions.” He knows that his young students must be prepared to defend the faith when challenged.

Currently, the class consists of six students ranging from seventh grade to high school upperclassmen. All students from around the area are always welcome to attend on any given Friday, though. It is a discussion-based model, with Father Violi promoting participation by asking and answering questions.

The small class size gives him the freedom to tailor each lesson toward the students’ interests and prior knowledge of the faith. “Last week we got into a whole tangent on angels,” he related. “I thought, Ok, there’s an interest here: Let’s capitalize on it.”

For its inaugural year Father Violi is focusing the class on the concept of the three-legged stool that constitutes Catholic Church teaching: the Bible, Tradition and the Magisterium. Because Catholicism is not simply Bible- or Tradition-based, all three are necessary to build a solid foundation of faith. When one of these is removed, Catholic theology falls flat.

When asked if teaching the class has created extra work for him, Father Violi replied, “Sure it has. I love it, though; it’s something I enjoy doing, so I don’t see it as work.” He views it as another facet of his priestly vocation.

Like the three-legged stool, pastoral ministry and sacramental life will fail without teaching. “Ultimately, what’s the end goal? I’m helping to educate my parishioners.”

At his previous parish of St. John the Baptist in South Bend, Father Violi had been tasked with researching the classical model of education because the parish school was considering adopting it at the time. Classical education focuses on teaching grammar, logic and rhetoric all at once, a concept that has him look at teaching methods that tie theology with things like poetry to better engage the students.

Similar to Catholic schools, he says of the classes for homeschool students: “You can tie everything together. It’s not just that we put religion in. It’s not just ‘school with Jesus;’ it’s Jesus immersing into every subject.”

Father Violi remarked that “The body of Christ cannot be broken into pieces. Home schooling shouldn’t be seen as a threat to Catholic education, but they should be able to work together. There’s a unity there. Christ cannot be separated. If we are able to unite those, we’re doing good things.”

Though the class is small now, the community at St. Joseph hopes to see growth in the coming months and years. And Father Violi is more than willing to continue in his work as teacher.

“If there’s enough interest, I’ll do another version on Saturday. If you can get me 10-15 high schoolers who are interested in learning theology, I’ll teach it.”