Young people have many options to connect with each other. However, sometimes it’s difficult to meet Catholic young adults who share a deep sense of faith.

“I like that this is based around adoration,” Alice Runion, 25, said of Cor Jesu, a weekly gathering for Catholic young adults that includes an hour of adoration, plus Mass and social time Wednesday nights at St. John the Baptist Parish in Fort Wayne.

“I think it gives a good sense of community,” said Runion, who helps coordinate the prayerful music played during adoration.

Started in January as an outreach to Catholic young adults in the Fort Wayne area, Cor Jesu, which is pronounced (pronounced Core Yay-soo) and is Latin for “the heart of Jesus,” is open to people of all ages, said Anne Therese Stephens, 34, the ministry’s founder and a canon lawyer in the marriage Tribunal of the Diocese of Fort Wayne-South Bend. 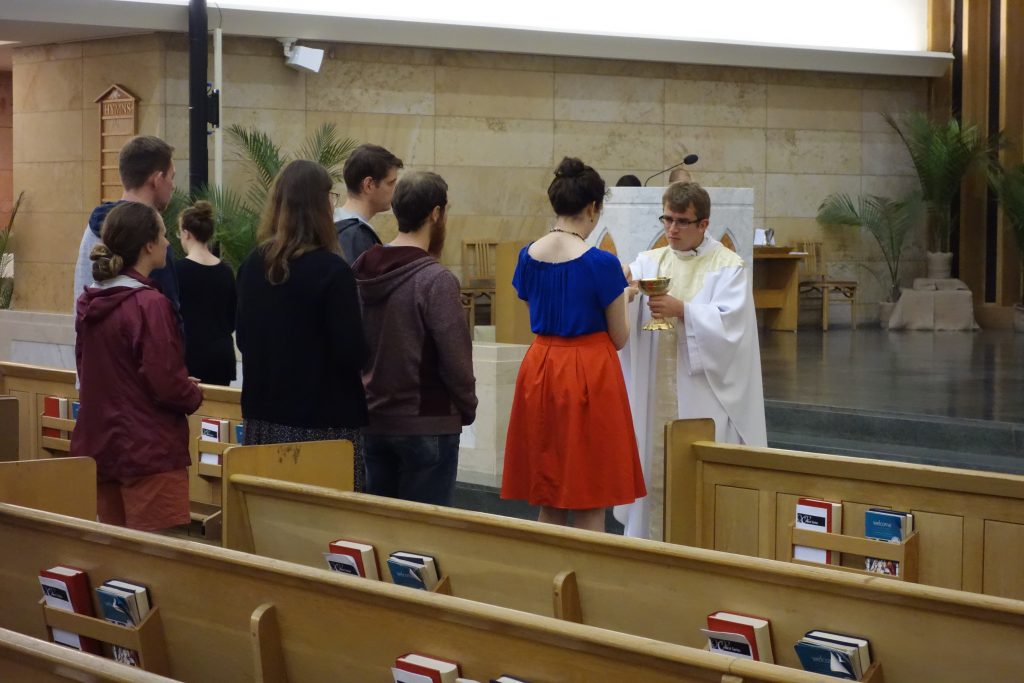 Stephens based the ministry on a successful one of the same name in her hometown of Milwaukee, Wisconsin.

“It started with college students and then young adults, and then spread to all ages,” she said of the Milwaukee ministry. That ministry reportedly has resulted in many conversions to the Catholic faith and many former Catholics returning to active practice of the faith.

“My friends there said it’s their favorite young-adult, spiritual thing to do,” said Stephens, who lived in South Bend for about a year before moving to Fort Wayne two years ago.

Devotion to the Sacred Heart of Jesus goes back to St. John the Evangelist, who laid his head on Jesus’ heart at the Last Supper and heard it beating.

“We want to help people have that physical experience with God,” she said. Those attending Cor Jesu can experience that connection through exposition of the Blessed Sacrament, confession and receiving the Eucharist at Mass.

Each week, adoration begins at 6:30 p.m., followed by Mass at 7:30 p.m. Social time takes place after Mass and, since spring, usually has involved a bonfire. People are free to attend any portion of the evening they can.

About 20 to 25 people have gathered each Wednesday, said Stephens, who expressed appreciation for the support the ministry has received from Father Andrew Budzinski, St. John’s pastor.

“It’s a small beginning, but Jesus started with 12,” she noted. She hopes attendance continues to grow, as it did in Milwaukee.

Fort Wayne has many pockets of Catholic young adults, but they aren’t well-connected, Stephens said. She hopes Cor Jesu gives them a place to connect and to grow in faith and friendship.

Lalor began attending St. John the Baptist after moving to the city about a year ago. She said that a person has to put themselves out there to meet other young adults in Fort Wayne, and that Cor Jesu is very accessible because it takes place on a weeknight after work.

Martinez, who attends St. Charles Borromeo Parish, Fort Wayne, began attending after he heard about Cor Jesu from a few of his friends.

“It’s been great to spend an hour in adoration and then have Mass,” he said.