WASHINGTON (CNS) — A bill in Congress to require respectful disposition of fetal remains from abortions as well as accountability from the abortion industry “is in keeping with society’s treatment of all other deceased persons,” said the chairman of the U.S. bishops’ pro-life committee.

In an Oct. 31 letter to lawmakers urging they support the Dignity for Aborted Children Act, Archbishop Joseph F. Naumann of Kansas City, Kansas, cited the shocking discovery in September and October of fetal remains in rural Illinois on property once owned by a now-deceased abortion doctor who for many years ran clinics in nearby Indiana.

The remains of 2,246 aborted babies were found in Dr. Ulrich “George” Klopfer’s home in Will County, Illinois Sept. 13. The following month additional remains were discovered in various cars Klopfer owned, and on Oct. 11 local authorities said they had determined the remains were of 165 aborted babies, bringing the total number now to 2,411.

Such actions make “people on both sides of the abortion debate uncomfortable, sad, angry,” said Archbishop Naumann, who heads the U.S. Conference of Catholic Bishops’ Committee for Pro-Life Activities. Every culture and religious tradition has customs and practices surrounding how to care for and dispose of the dead, he noted in his letter, which was released by the USCCB Nov. 1. 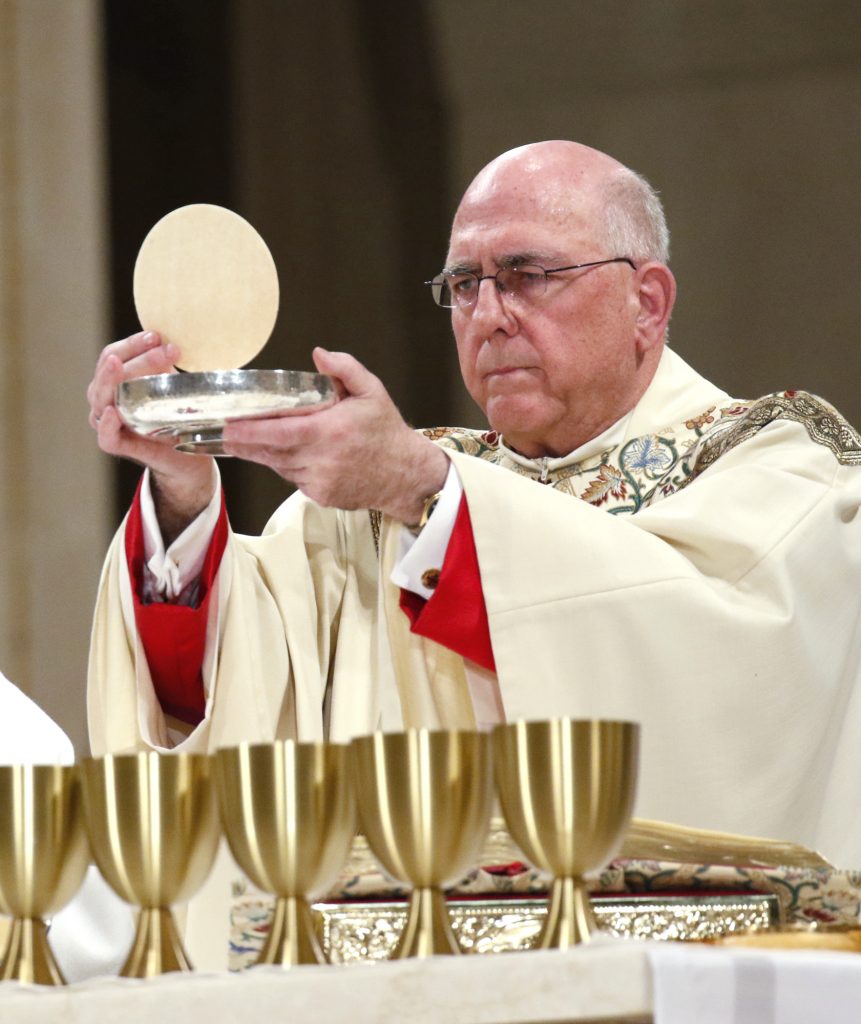 Archbishop Joseph F. Naumann of Kansas City, Kan., chairman of the U.S. bishops’ Committee on Pro-Life Activities, celebrates Mass during the National Prayer Vigil for Life Jan. 17, 2019, at the Basilica of the National Shrine of the Immaculate Conception in Washington. (CNS photo/Gregory A. Shemitz)

For Catholics, he said, the Church has long taught that “the human body shares in the dignity of ‘the image of God,’ ‘that our bodies are a reminder of the bodily resurrection of Jesus, and of that resurrection, which we too will experience after death, and burying the dead is taught as one of the seven corporal works of mercy.”

“Other faiths and belief systems likewise promote dignified treatment of the deceased and respectful disposal of their remains,” he continued, adding that health regulations, ethical guidance for medicine and science, trauma and emergency response, and religious and moral belief all point toward the need for a society to respectfully dispose of each human body.

The Dignity for Aborted Children Act was introduced in the Senate in Sept. 27 by Republican Sens. Todd Young and Mike Braun of Indiana. It requires abortion providers dispose of the remains of unborn children just as any other human being. Failure to do so is punishable by a fine and up to five years in prison. It also requires a consent form so the mother can choose to retain possession of her unborn child or allow the provider to cremate or inter the unborn child. Failure of the provider to execute these forms is punishable by civil penalty.

The measure, S. 2590, has a companion bill in the U.S. House, H.R. 4934, introduced in late October by Republican Reps. Jackie Walorski and Jim Banks of Indiana.

The Dignity for Aborted Children Act builds on the Indiana law enacted in 2016 and upheld this year by the U.S. Supreme Court that requires dignified disposition of aborted fetal remains.

“Whether you support or oppose legalized abortion, I hope you will agree that these human bodies should not be wantonly discarded as medical waste or preserved at the whim of the abortion doctor,” Archbishop Naumann told members of Congress.

“Such basic courtesy is in keeping with society’s treatment of all other deceased persons including cadavers, donated organs and tissues, remains that are recovered after traumatic incidents, and so on,” he wrote. “As a nation, we can at least come together to ensure all human remains are treated with basic human dignity.”