“May the Lord give you His peace.” This customary Franciscan greeting has taken on new significance for LeeAllen Fortin, who was ordained to the Sacred Order of the Diaconate Nov. 27.

Deacon Fortin, a native of South Dakota, initially came to Fort Wayne to discern a calling as a Franciscan friar. Although the community disbanded in 2020 and he is now preparing to serve Fort Wayne-South Bend as a diocesan priest, he continues to carry with him the peaceful, prayerful spirit of St. Francis. 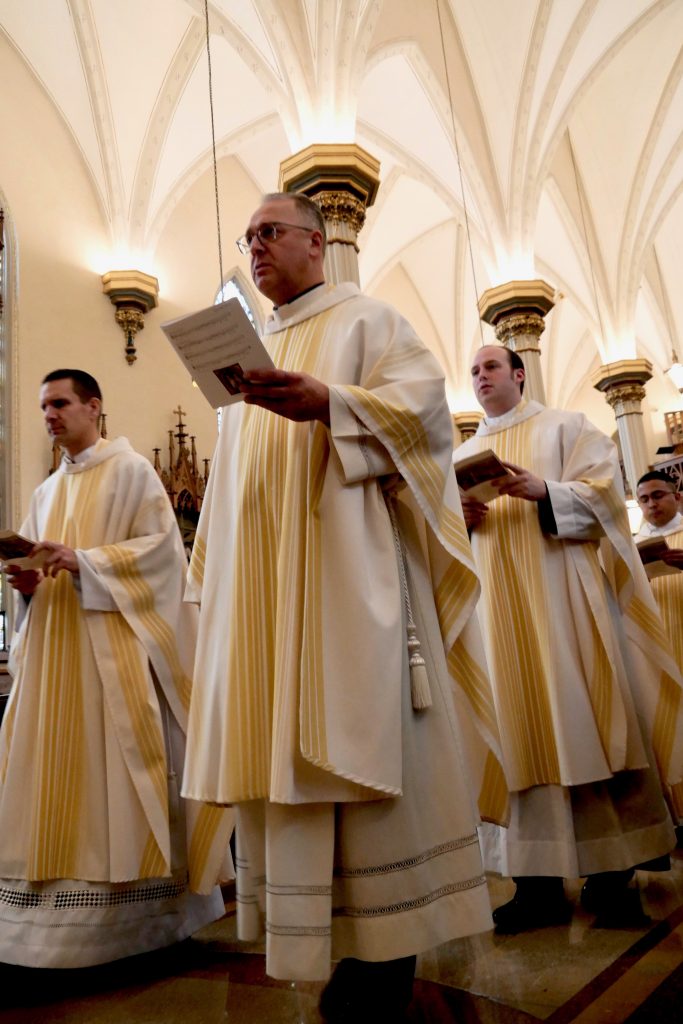 Priests from around the diocese concelebrated the ordination. Several priests also came from Cincinnati, where Fortin is completing his priestly studies at Mount St. Mary’s Seminary. — Photos by Jennifer Barton

Bishop Kevin C. Rhoades highlighted this change of seasons for Fortin. He exclaimed, “There is a rhythm in our life with key moments and events that mark and shape us on our earthly journey. The most momentous events are those in which the mystery of communion with God who is love is manifested and communicated to us. Today is such a key event in the life of LeeAllen as he receives the gift of the sacrament of Holy Orders. God has been preparing him for this moment for many years.”

“The Lord desires that you serve Him as a deacon and eventually as a priest of His Son Jesus. Your vocation is not your personal project nor is it a simply human affair. Your spirit rejoices today not in yourself or your successful accomplishments in the seminary. Like the Blessed Virgin Mary, your spirit rejoices in God our Savior, for He has looked with kindness upon you, His lowly servant. God will touch you today when I, His instrument, lay my hands upon your head and pray over you. The Holy Spirit will come upon you and strengthen you by the gift of His sevenfold grace to carry out faithfully the work of the ministry as you are received into the order of the Diaconate and sent on mission.”

As heard in the Gospel at this Mass, Jesus sent out the disciples ahead of Him to be heralds of peace, and to serve with meekness, compassion and brotherly affection. Remarking that Fortin already greets others with an expression of “peace,” Bishop Rhoades emphasized that through his ordination there will be new opportunities and responsibilities for bringing Christ’s healing wholeness to those who are desperately in need of consolation and renewal. This will occur liturgically as well, given the deacon’s role of announcing and sharing Christ’s peace in the Mass. 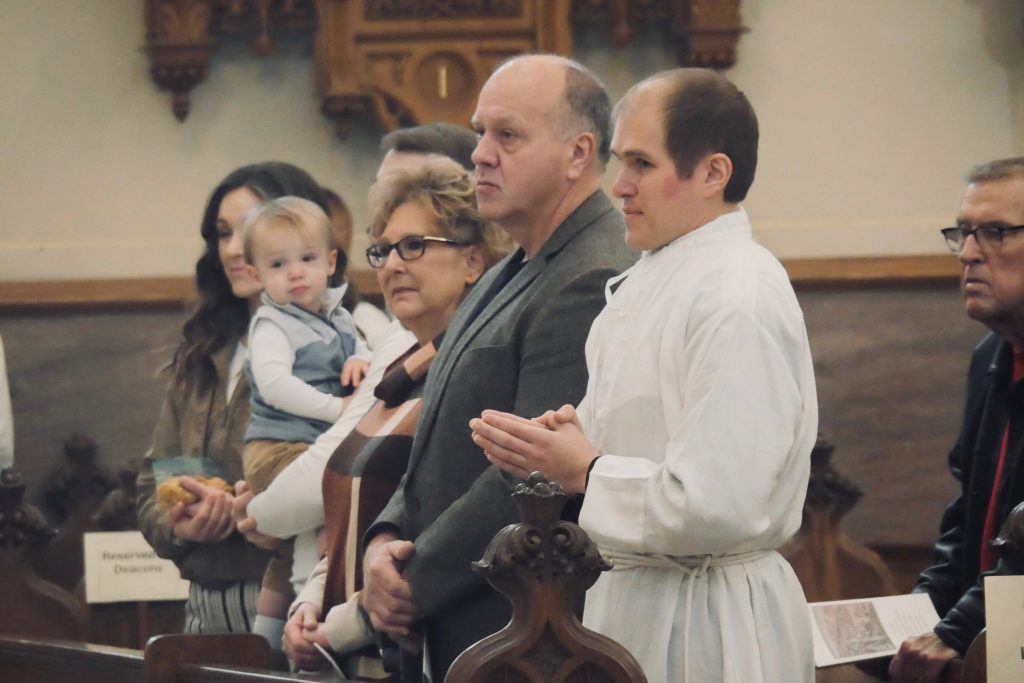 Deacon Fortin’s parents, sister, brother-in-law and nephew made the trip from South Dakota to witness his ordination to the diaconate, to which Bishop Rhoades warmly welcomed them.

Having known Fortin as both a friar and seminarian for many years, the bishop shared that his Franciscan spirit is a blessing for the diocese. He stated, “We are all called to embrace the radicalism of the Gospel and the evangelical counsels according to our state in life. We are called to imitate Jesus in His poverty, chastity and obedience as part of our identity as disciples of the poor, obedient and chaste Christ. Though we don’t take a vow of poverty as diocesan priests, we are still called to live a life of material simplicity and to be detached from material things. We are called to follow the example of Christ Who, though rich, became poor out of love for us.”

In references to Fortin’s promises of obedience and chastity, he emphasized, “You are promising to love and serve the Church as Christ instituted it in her hierarchical structure.  This demands a spirit of asceticism, not being too attached to your own preferences or your own opinion or point of view. This obedience has an important pastoral dimension since it is to be lived with constant readiness to go and serve where you are needed. You also promise to exercise your ministry for the rest of your life in the celibate state, after the example of Jesus Himself, and because of your love for Him. Through celibacy, you will cling more readily to Christ with an undivided heart and will be able to devote yourself with greater freedom to the service of God and others.” 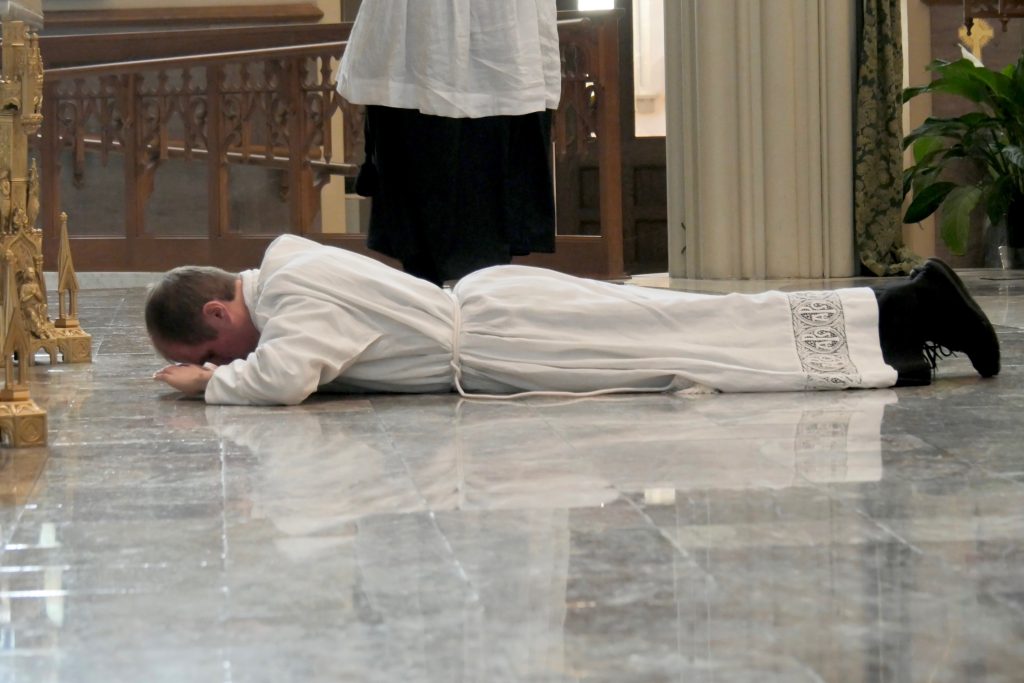 Deacon Fortin lays prostrate at the altar of the cathedral while the congregation invokes the communion of saints in prayer.

Bishop Rhoades thanked those in attendance from Mount Saint Mary’s Seminary in Cincinnati, where Deacon Fortin received his formation for the diaconate and priesthood. Those in attendance included president and rector Father Anthony Brausch, professor Father Andrew Moss, Father Christopher Geiger and many classmates and friends. 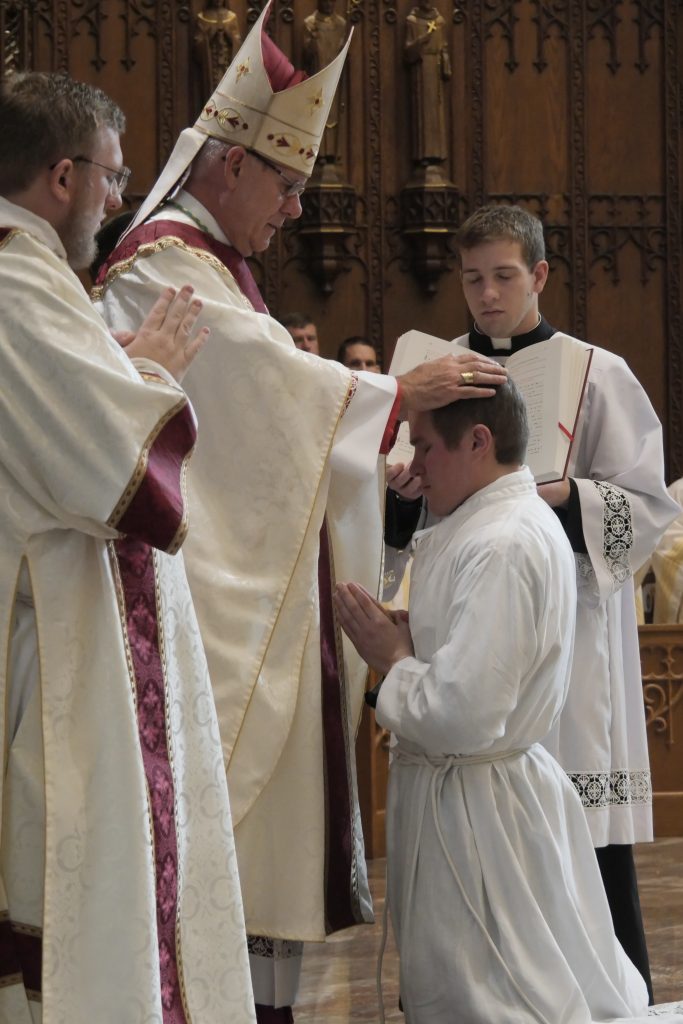 Bishop Kevin C. Rhoades lays his hands on Fortin, ordaining him as a deacon.

One of these classmates was Jacob Lindle, a transitional deacon in the Diocese of Cincinnati, who proclaimed the Gospel at this Mass. Afterwards, Lindle shared the joy of witnessing and participating in the ordination.

“LeeAllen has been in seminary and religious formation since 2008. Knowing and seeing how much he wants to give himself to the Lord in singleness of purpose and has been desiring this for such a long time, seeing it take place was very emotional. Being able to see the emotion on LeeAllen’s face during the homily, it was clear how special his relationship is with bishop and how well he knew LeeAllen’s heart and love for Mary.”

Father Paolo deGasperi, who had also been a member of the Franciscans here before his ordination to the diocesan priesthood earlier this year, likewise expressed gratitude to see his friend receive holy orders.

“LeeAllen has been through a lot, and this day meant so much to him. It was very special to see the level of familiarity he has with bishop, who has known him for so long. Bishop sees how LeeAllen’s prayer life and way of living poverty are gifts to the diocese, but also knows there will be challenges as he continues to learn how to integrate these habits into his new identity and ministry. It is a joy to continue walking with him in his journey and I am very happy to have him as a brother in our diocesan clergy.” 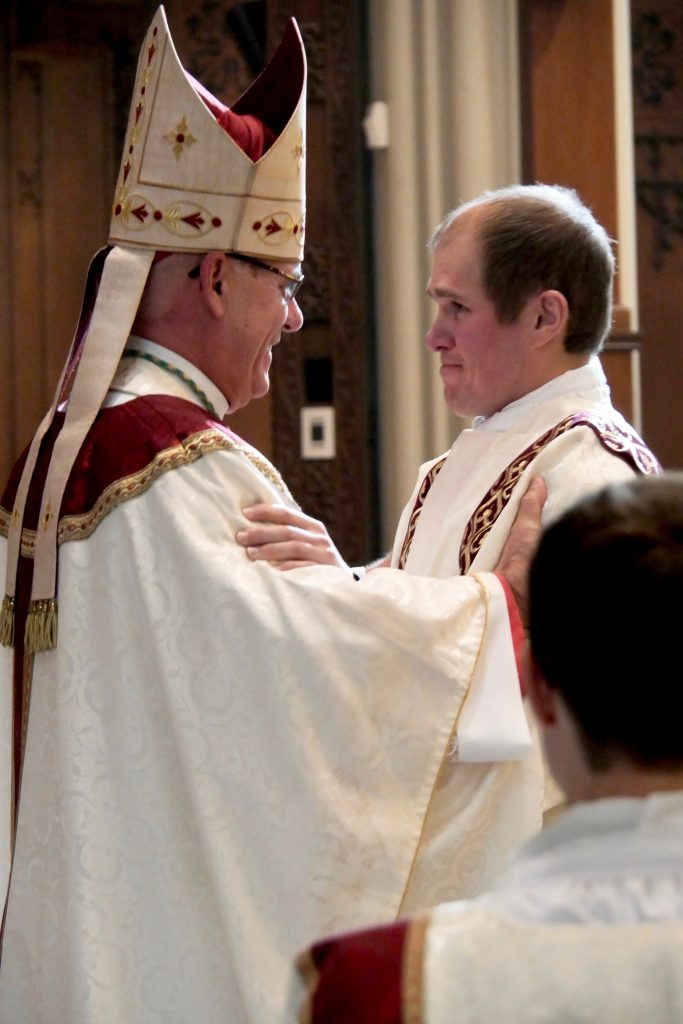 Bishop Rhoades welcomes Deacon Fortin into his new life of service to the Diocese of Fort Wayne-South Bend.

Following the ordination, Deacon Fortin gathered for a reception with friends and family at St. Andrew Church, where he led a holy hour and preached about being sent to make God known, loved, and served, as well as the importance of staying with the Lord, who stays with his people in the Eucharist.

Deacon Fortin asked for prayers that he will continue to be conformed to the image of Christ, to love with the heart of Mary Immaculate, and to serve with the humility of St. Joseph as he approaches his priestly ordination in June.