The past five years have brought heartbreaking news out of Nigeria. A study done by the International Society for Civil Liberties and the Rule of Law found that in 2020 alone, more than 600 Christians have been killed in the country. Priests and seminarians have often been the target of such violence as kidnapping and murder. The dangers of living for Christ are dire, yet many priests and seminarians continue to answer the call to serve God both at home and abroad.

For several priests serving in the Diocese of Fort Wayne-South Bend, the brutality in Nigeria is not an ocean away – it’s a concern they carry in their hearts. There are currently more than 10 priests from Nigeria serving the needs of the Catholic faithful within the diocese, and many more previously served and have now returned home. In May, Bishop Kevin C. Rhoades also ordained a young seminarian from Nigeria to the diaconate, Augustine Onuoha. 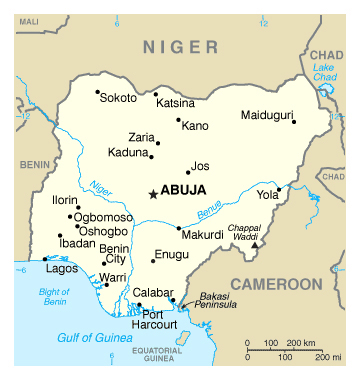 vidiani.com
As a missionary diocese, the Diocese of Fort Wayne-South Bend relies on the assistance of priests from around the world, many of whom come from the African country of Nigeria.

Nigeria at a glance

With an estimated 200 million people, Nigeria has the highest population in Africa and the seventh highest in the world. Poverty is also high in Nigeria, despite the fact that it exports large quantities of oil. Over 500 languages are spoken in the country, with English as the official language. Pidgin English is a combination of English and the local language and is starting to be a subject of study in universities in America, said Father Louis Fowoyo, pastor of St. Louis, Besancon in New Haven. He comes from the western region of Nigeria, a town called Kabba.

Father Fowoyo explained that Nigeria was formed as a British colony, eventually bringing people of different tribes and towns together into one nation. He describes the conflict in Nigeria as a result of the political infighting between the three major regions of Nigeria – the west, east and north regions. The current capital of Abuja is in the north, though he recalls when the government moved it from the coastal, commercial city of Lagos.

The population is concentrated in the southern part of the country, where Christianity is the dominant religion. Most Nigerian priests serving in the Diocese of Fort Wayne-South Bend hail from this region. Though Catholicism is not considered a major religion of Nigeria as a whole, Father Fowoyo pointed out that it is “the largest block that can come and talk to the government about any societal issue in Nigeria … It can decide to walk on its own or decide to walk with others. The Catholic Church always walks with the others, because this dialogue in the Church — it brings everyone together.”

Nigerian clergy have staged political demonstrations, such as this year on Ash Wednesday when the bishops asked Catholics to wear black clothing or armbands in mourning for those who have been killed or kidnapped.

Vocations in Nigeria are plentiful, according to Father Fowoyo. It is likely that Nigeria boasts one of the highest percentages of priestly vocations in the world. Aside from diocesan seminaries, religious orders such as the Claretian Missionary Fathers and the Congregation of the Holy Spirit have their own seminaries in Nigeria. Many Spiritan fathers from Nigeria have served in the Diocese of Fort Wayne-South Bend, and Bishop Rhoades visited the order, located in the Diocese of Nnewi, in 2018 to ordain several priests.

Of the number of vocations, Father Fowoyo said, “I wouldn’t say that vocation is because of poverty. It is because of the faith of our parents.” 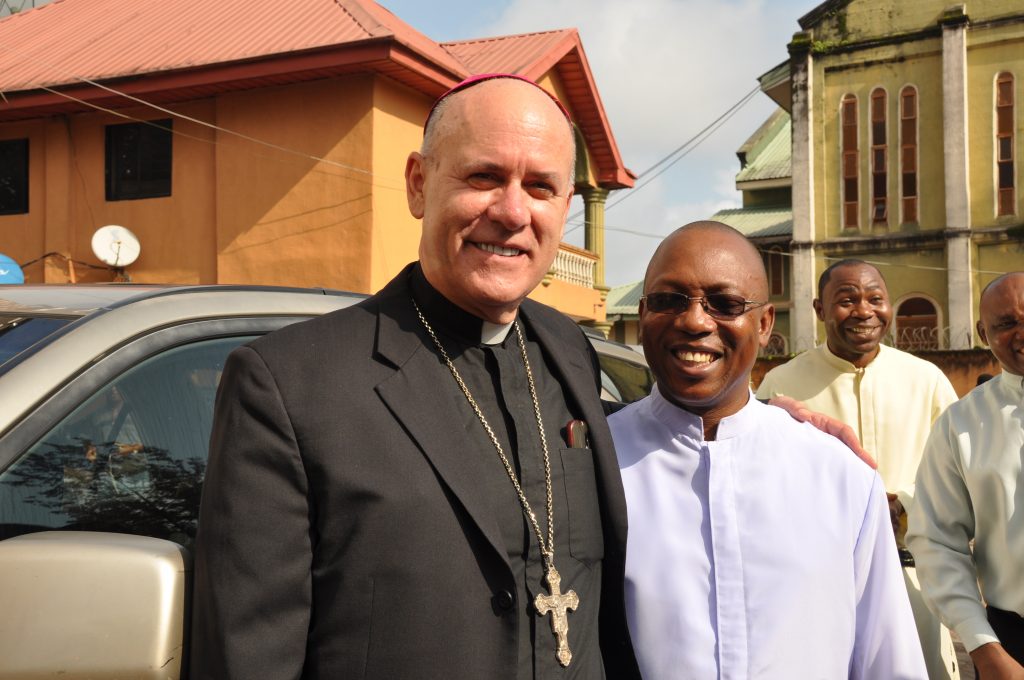 File photo
Bishop Kevin C. Rhoades has fostered a relationship with the Congregation of the Holy Spirit in the Diocese of Nnewi in Nigeria. Several Spiritan priests currently serve in the Diocese of Fort Wayne-South Bend, and in 2018 he ordained 13 new priests and 10 new deacons to the order.

Missionaries to the west

The diocese has embraced these kind priests, who have humbly obeyed their bishops to come to a place that is vastly colder and culturally different from what they are used to. Father Sunday Akuh, parochial vicar at Holy Family Parish in South Bend, arrived last fall. He said his experience in the area has “been very welcoming.” He has enjoyed working in the parish, particularly the school.

Father Akuh already knew some of the other local priests from his homeland. He affirmed that the Nigerian priests do maintain a community among themselves, talking on the phone or going out to eat when they can arrange it. That connection between countrymen is a blessing for those so far from home, they said.

Their fraternal bond extends beyond camaraderie. Many of the Nigerian priests attended the ordination of Deacon Onuoha at St. Vincent de Paul Parish, Fort Wayne, in June “to support him as a brother” in the faith, said Father Akuh. He also wanted to hear Bishop Rhoades, whom he said preaches “very well, very beautifully, very pastorally.” At ordination, he said “I felt like I was one of the newly ordained.”

Deacon Onuoha shared how he had met many Nigerian priests who were studying at the University of Notre Dame while he was doing pastoral work in the South Bend area. He said, “One of the joys of every Nigerian is to celebrate the successes and goodness of everyone, especially their fellow Nigerians far away from home. We like to joyfully identify with our brothers in moments of joy and sorrow.” Several of Deacon Onuoha’s Nigerian friends came from other places in the United States, particularly Maryland, Massachusetts and Virginia for his ordination.

Part of his journey to the diocese involved the aid of another Nigerian priest, Father John Eze, pastor at Queen of Peace in Mishawaka. Father Eze had previously been the pastor at Holy Spirit Parish in their home country, where Deacon Onuoha served as seminarian. Father Eze urged him to petition Bishop Rhoades to become a diocesan priest, and the bishop accepted his application. Deacon Onuoha was sent to St. Vincent de Paul Parish, which he sees as “a gift to me from the bishop … I was accepted and loved at St. Vincent.” He has also found kinship with priests and seminarians in the diocese. 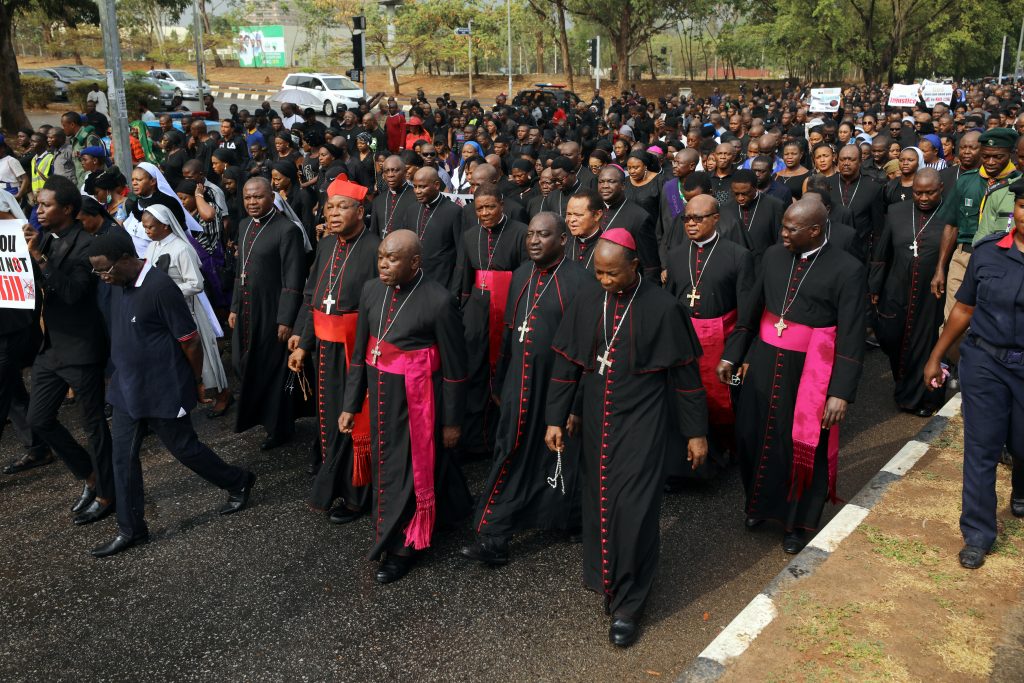 Prelates lead a protest in Abuja, Nigeria, over unending killings of Nigerians March 1, 2020. Nigerian bishops called on the international community to help the West African country in its fight against ethnic insecurity and terrorist groups such as Boko Haram. (CNS photo/Afolabi Sotunde, Reuters)

The conflict in Nigeria is complex and long-standing. It has escalated in recent years, particularly with the terrorist group Boko Haram in the northern region near Lake Chad and militant Fulani herdsmen in the central region. Both are predominantly Muslim groups who target Christians, especially those traveling on the dangerous roads. Father Fowoyo stated that the government brought in mercenaries from countries that border Nigeria, who “go kill, and they don’t even know how to send them back.”

When he returns to his home country, Father Akuh hopes to work in a school setting. He said Catholic churches provide education for many of the youths in Nigeria and that education in the Diocese of Fort Wayne-South Bend “is very good.” He believes that supporting the building of schools and churches in Nigeria is vital to its future.

Father Akuh related how the northern region consists of a “highly Islamic” population, mostly uneducated, where tolerance is not taught. He also cited the problem of a government with little political power to stop violence. Father Fowoyo agreed, stating that priests and seminarians are often targeted because they attract greater media attention.

When asked what can be done to support Christians in Nigeria, one priest suggested, “The bishops in the U.S. who are enjoying the services of Nigerian priests – and I know we are doing our best to serve well – can gently put a voice on our behalf. They can gently help us talk to the nuncio, so they can help us talk to the Vatican. The way things are going, if they have started kidnapping priests now, one day they will tell us we cannot open the churches.”

Father Fowoyo ardently appeals for government assistance for his native country from the western world. “Until Europe and America help Africa within their own countries, it will be difficult for the world to have peace … Because there’s nowhere in the world you will not find Africans. We are all looking for greener pastures. We need to help each other.”

On July 3, Catholic News Agency reported that the European bishops, led by Cardinal Jean-Claude Hollerich of Luxembourg, have pledged to advocate for Christians in Nigeria with the European Union, hoping to end the years of violence in a country desperate for peace.

As a missionary diocese, the Diocese of Fort Wayne-South Bend relies on the assistance of priests from around the world, many of whom come from the African country of Nigeria.