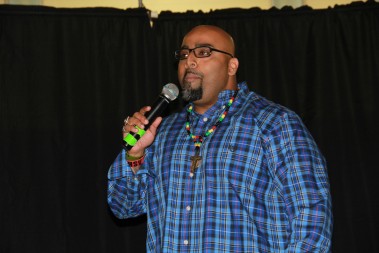 Ansel Augustine, a native of New Orleans and a “holy hot boy” was the keynote speaker at the Nov. 1 Confirmation Rally for youths preparing for Confirmation. The rally included breakout sessions with Tracy Rau and Jason Garrett.

More photos from the rally can be found here.

FORT WAYNE — “Made for Greatness #Sainthood” was the theme for a Confirmation rally that drew middle school students from across the diocese to Bishop Dwenger High School in Fort Wayne on Saturday, Nov. 1.

In opening, he noted that it was the feast of All Saints, “a great day in the life of the Church … and a great day for a Confirmation rally.” Not only do we honor all the saints, all of us are called to be saints as well, he said.

He reminded his listeners that he’ll confirm most of them when they complete their preparation for the sacrament and added, “It’s one of my most joyful duties as a bishop.”

He especially liked the shirts the students wore which proclaimed, “Do not be afraid to be saints,” in the words of St. John Paul II, one of the newest saints.

Bishop Rhoades elaborated on the Gospel message from the Book of Revelation written by St. John the Apostle, his favorite saint. In doing so, the bishop recalled a vacation to Italy when he visited the cave on the island of Patmos where John saw visions of heaven and wrote the Gospel. Bishop Rhoades noted that gathering for Mass as they had done on the feast day was a foretaste of John’s heavenly vision.

Bishop Rhoades advised the students, when selecting a Confirmation saint’s name, to think about the saints and to choose one to be a special friend throughout their lives, just as John was a special friend to Jesus to the end of His life. Like John, “live as faithful followers of Jesus Christ,” he challenged them.

Bishop Rhoades further explained the upcoming sacrament to the confirmands by saying, “Confirmation completes what you received at Baptism.”

He noted that they will be permanently “sealed” with the gift of the Holy Spirit as they are confirmed. “God calls us to be saints … to fight temptation … to overcome the enemy,” he said. Confirmation offers the strength to live the faith and bear witness to Christ in word and deed. “We are all called by God to be saints,” he said in closing.

Featured speaker for the rally was Ansel Augustine, a native of New Orleans and a “hot boy” in that culture. He told Today’s Catholic that the term “hot boy” refers to a person who handles his business and represents himself, his clique or his city well. No matter how difficult the situation, he comes out on top.

“A hot boy is a person full of courage and is known to have a big heart,” he said. A hot boy has expectations but can play the game however it goes and will not tolerate disrespect.

As a servant of the Lord, said Augustine, he has tweaked the image to develop the Holy Hot Boy. He considers himself an ambassador for Christ and spreads His message wherever he goes. He handles his business in a Christian manner.

Augustine regaled his listeners with many stories about growing up in New Orleans, each one exemplifying a Christian attitude in doing God’s work. He frequently exhorted the students to “make some noise for the Lord,” to which they responded with a loud cheer.

He reminded them that the sacrament of Confirmation is powerful and will help them live a life centered in Christ.

“We are called to be saints, to be a witness of God’s love to the world,” he said.

“You know who you are and Whose you are,” said Augustine.
When returning to his native New Orleans after the destruction of Hurricane Katrina, the speaker said he noticed water lines from the flooding on each of the ruined and abandoned buildings. The higher the water line, the greater the damage. Likewise, we have our own individual “water lines,” which represent challenges in our lives, he noted.

He urged his listeners to emulate the saints by giving those issues to God, to touch the cross and lift up those trials to Him.
“Do not be afraid. … Live the life of Christ,” he concluded. He echoed the theme for the day’s rally, “Do not be afraid to be saints.”