Sisters Liliana Loredo, 17, and Fatima Loredo Estrada, 16, parishioners of Holy Family in South Bend, shared their happiness at being able to receive their confirmation. They were among the roughly 50 people confirmed at a special Mass on Sunday, May 29, the Ascension of the Lord, at St. Matthew Cathedral in South Bend.

Teresa Oross, Director of Sacramental Preparation at Christ the King Parish in South Bend, explained that adult confirmands are those who have already been baptized in the Catholic Church and who have typically also received holy Communion.

Having lived in Mexico for two years, Loredo and Estrada were unable to be confirmed. The importance of receiving this sacrament led them to attend confirmation meetings when they returned to the diocese. 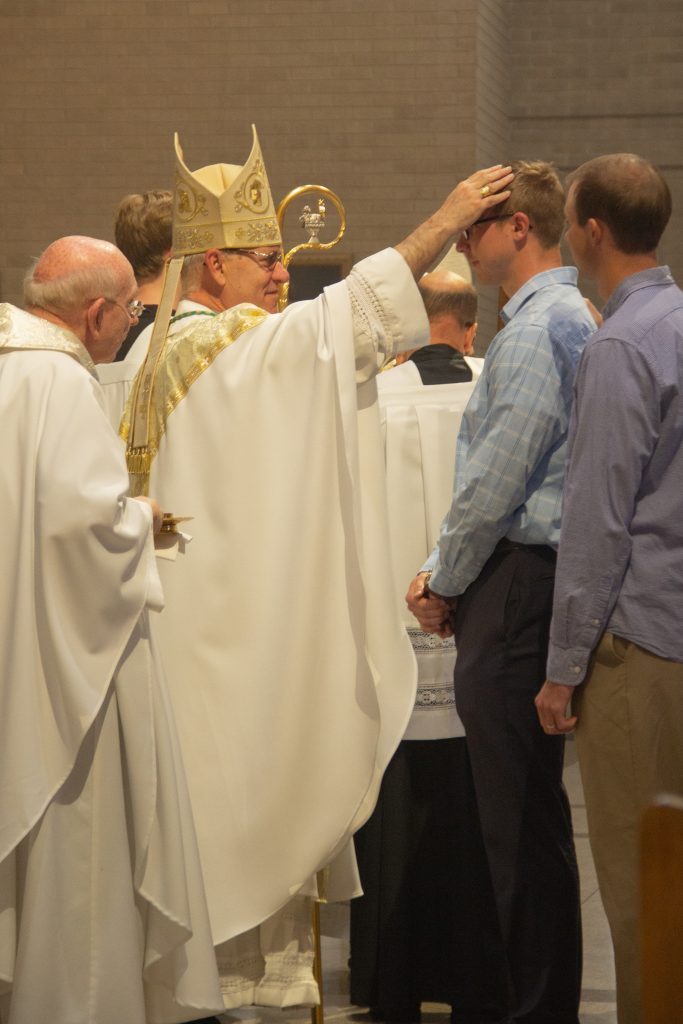 Samantha Rohloff
Bishop Kevin C. Rhoades confirms members of the Catholic faith who have not yet received this sacrament. These Masses take place in both South Bend (above) and Fort Wayne (below) every spring. 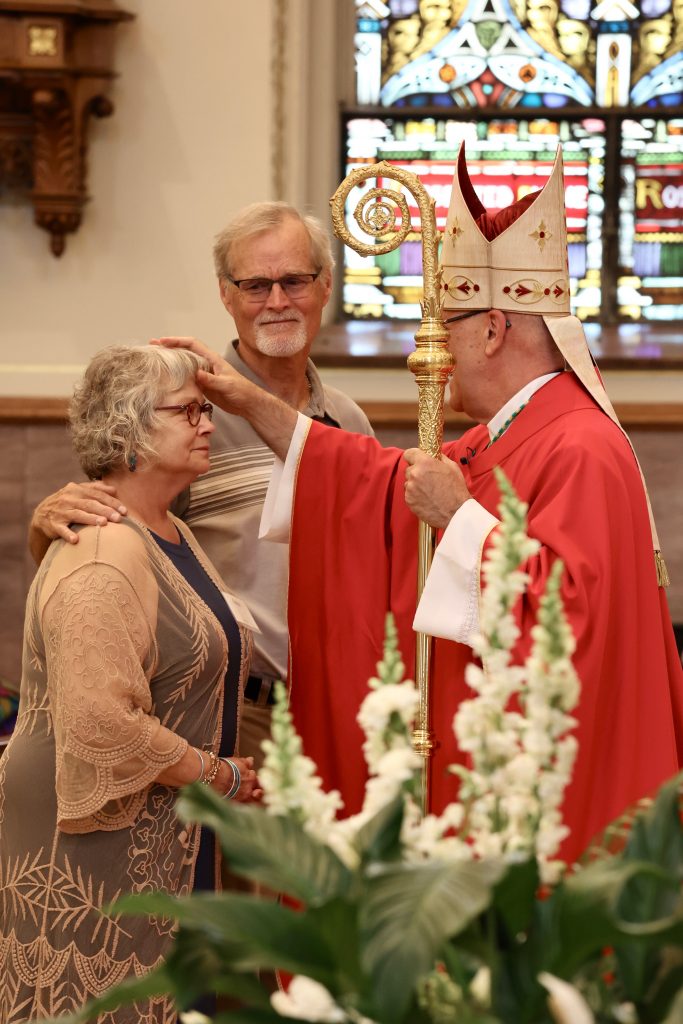 “It was an amazing experience, actually. I kind of teared up a bit when she was confirmed first,” Liliana said about watching the confirmation of her sister Fatima, who uses a wheelchair and is nonverbal. The strong bond between the two siblings is especially prominent as they share the same confirmation saint, the Virgin Mary, of whom Liliana said they both admire as their own mother.

Ellie Callahan, 28, a parishioner of Christ the King in South Bend, received the sacrament of baptism at St. Thérèse Little Flower Parish and the sacrament of holy Communion at Holy Family, both in South Bend. Her family frequently moved around when she was a child and as a result, she left Holy Family in the seventh grade, the year before she would have been confirmed.

“It’s definitely always been weighing on me that I never made my confirmation,” said Callahan. She added that being confirmed is important to her and to her fiancé, Joe Concannon, who is part of a large Catholic family.

“I just wanted to be closer with my faith and closer to God and get a better understanding of the Church and everything,” she explained. “I feel like I haven’t been whole – I don’t know how to really explain that any better – I just feel like this will make me whole.”

After having been away from the faith from roughly age 18 to 25, Callahan attributed her return to Catholicism to her fiancé. “Knowing he was Catholic, I started going to church with him, started praying the Catholic prayers again, and I just felt so much better. I felt like my prayers were being answered when I was attending the Catholic Church. I felt like my life was getting better.”

Concannon is also her confirmation sponsor. “He definitely pushed me back into that direction, and yeah, I don’t regret it,” she said. She also hopes to act as a strong role model for her two young children as she raises them in the Catholic faith.

Bishop Rhoades also celebrated adult confirmation Mass on the Fort Wayne side of the diocese on Sunday, June 5, at 11:30 a.m. at the Cathedral of the Immaculate Conception, confirming 33 people in their Catholic faith, appropriately on the Feast of Pentecost.