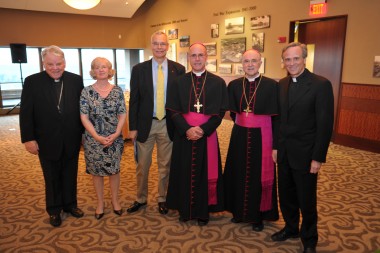 NOTRE DAME — People usually think of Christian martyrs as those early Christians who were killed during the first few centuries of the Church. The reality is that most people who were killed for being Christians died in the 20th century, and the persecutions and killings continue today.

A conference on these contemporary Christian martyrs took place at the University of Notre Dame Nov. 4-6 under the sponsorship of Notre Dame’s Institute for Church Life.  The meeting, titled, “Seed of the Church: Telling the Story of Today’s Christian Martyrs,” gathered scholars as well as persecuted Christians to discuss the topic, call attention to this under-reported phenomenon and consider possible responses.

Christian historian and demographer Todd Johnson estimated that 70 million Christians have been killed over the centuries, with most of those deaths occurring since 1900. Of those 70 million martyrs, over 12 million were Catholic, with 11 million of them being killed in the second millennium alone, many of them by Stalin and the Nazis. In arriving at those numbers, Johnson used a definition of a martyr as a Christian who was killed because he or she was living as a witness to Christ.

Allen Hertzke, a professor of political science at the University of Oklahoma, said that the “suffering Church” faces very different situations in different parts of the world. Yet, a “pervasive, relentless and vicious persecution” can and has eradicated Christian witness by combining old ways of persecution with new ways like “cleansing” of entire communities.

This issue is “momentous for the fate of the world,” Hertzke said, because Christianity is linked to the concept of human freedom and is the largest religion in the world, as well as the most globally dispersed and persecuted in diverse contexts. He called for “high level scholarship,” “creative Church response,” “assertive public policy” and “the best of journalism” to address the persecution.

Experience with some of that harassment and persecution was related by several conference speakers, most of whom said that extremist Christians also have been guilty of violence. Bishop Matthew Hassan Kukah of Sokoto, Nigeria, said that persecutions in Africa were very complex. In Nigeria, he said most of the violence is politically motivated, and since Catholics are a minority in his diocese, they face discrimination such as denial of access to land to build churches, denial of state employment and denial of inheritance rights. The way forward, he insisted, is to continue on the path to democracy for a fair and just society by building relationships through dialogue.

Jesuit Father Cedric Prakash, director of Prashant, a Jesuit center for human rights, justice and peace in Ahmedabad, Gujaret, India, said that Christianity in India goes back 2,000 years, and India is known as a welcoming and tolerant country. In some places, he said, extremist Hindus target other Hindus who have converted to Christianity, and Christian villages and churches have been burned down. Father Prakash also said he works to encourage bonding between the various faiths to achieve religious freedom.

Father Gianni Criveller gave his perspective on the persecution of Christians in China, where he has worked for years. He is a member of the Pontifical Institute for Foreign Missions and is a professor at Holy Spirit Seminary College of Theology and Philosophy in Hong Kong.

Even though the religious persecution conducted under Mao has lessened, he said, the ideological arguments and instruments persist, and people of faith are subjected to strict control, correction and supervision. Recently, he said authorities have tightened control over the Catholic Church, and priests have been detained and some even have vanished. This control linked with increasing secularization of Chinese society have had a negative effect on Catholicism in China, he said, so the faith is not growing there.

Archbishop Carlo Maria Vigano, the apostolic nuncio to the United States, acknowledged persecution of Christians in other countries, but focused his keynote remarks on his concerns over the erosion of religious freedom in this country, saying that martyrdom, persecution and religious freedom are all inter-related.

In recent times, he said, religious persecution may not mean torture or death, but rather can be an effort to harass and marginalize religious people and prevent them from participating in public life. He specifically named threats to religious liberty connected to the Patient Protection and Affordable Care Act, commonly known as Obamacare, and the federal Health and Human Services mandate to provide employee insurance that covers abortifacients, contraceptives and sterilization.

These threats to religious freedom in “the greatest democracy in the world” are “a tragedy for not only the believer but also for democratic society,” and “pose a grave threat to the vitality of Catholicism in the United States,” he said.

Msgr. Angelo Romano of the Community of Sant’Egidio and rector of the Church of San Bartolomeo in Rome struck a positive note when he told the conference about the Icons of Witness. In 1999, Pope John Paul II created a commission to study Christian martyrs of the 20th century, and he dedicated the church as a basilica to preserve the memory of the “new” martyrs. A large icon of the new martyrs was created by a member of the Sant’Egidio community and placed on the high altar in San Bartolomeo in 2002.

During the closing Mass of the martyrs’ conference, a copy of that icon was blessed by Archbishop Vigano and will be placed in Notre Dame’s Sacred Heart Basilica to encourage people to meditate on the witness of the new martyrs and to stand in solidarity with them.