A March 4-6 conference at the University of Notre Dame focused on how lay people in the Catholic Church can help address the clergy sexual abuse crisis. It was the second program in the 2019-20 Notre Dame Forum series examining the crisis and the Church’s response to it.

The conference title was Called and Co-Responsible, drawing on a 2012 talk by Pope Benedict XVI in which he said laity “should not be regarded as ‘collaborators’ of the clergy, but rather, a people who are really ‘co-responsible’ for the Church’s being and acting.” This co-responsible role of the laity also has been articulated by Pope Francis throughout his pontificate.

Professor John Cavadini, director of Notre Dame’s McGrath Institute for Church Life, which sponsored the conference, welcomed the attendees and expressed the hope that the gathering could explore creative responses to the sexual abuse crisis by examining new ways of thinking about the partnership between laity and clergy in carrying out the mission of the Church.

Archbishop Rino Fisichella, president of the Pontifical Council for Promoting the New Evangelization, was scheduled to give the conference keynote on lay co-responsibility for evangelization. However, he was unable to make the trip because the university currently is not allowing travelers from Rome onto campus because of the coronavirus outbreak in Italy.

Bishop Kevin C. Rhoades of the host Diocese of Fort Wayne-South Bend read Archbishop Fisichella’s paper, in which the archbishop reminded those gathered that responsibility goes along with freedom in all aspects of life.

The archbishop referred to the letters of St. Paul to demonstrate that all believers are called to be disciples and to evangelize, which can be done even under difficult circumstances, as Paul proved in his letters from prison.

He also noted that society today has “new idols” who lack intellectual depth, and “11th-hour messiahs” who preach the end of the world. Further, in the coming decades, he said, there will be even more corruption, people in relationships without responsibility and legislation contrary to the dignity of the human person.

Still, Christians must continue to live a “coherent” lifestyle in face of these challenges, the archbishop wrote, and the need will be even greater for people like St. Paul to evangelize the world, and laity share this responsibility.

In one of eight plenary sessions of the conference, Kerry Robinson spoke about lay co-responsibility for a culture of healing from the sexual abuse crisis in the Church. She is founding executive director and global ambassador of the Leadership Roundtable, an organization of lay, religious and clergy experts who offer expertise to assist the Catholic Church with best practices and accountability in management, finances, communications and human resource development.

Robinson noted that “the twin crises of abuse and fractured trust in Church leadership” have made these difficult times to be Catholic. The abuse crisis has eroded the moral authority of the Church, she said, and has negatively affected evangelization, the credibility of Church leadership and the Church’s financial well-being.

Restoring trust in the Church requires “cultural change based on transparency, accountability, competency and justice,” Robinson said. She stressed that laypeople need to be part of the solution not only because of their expertise, but also because of their diversity in outlook and experience.

She wondered how differently the Church would have handled the sexual abuse crisis if the laity, particularly parents, had been included early on in leadership and decision-making.

“We need the diversity of perspective and experiences to be healthy and whole and wiser and more prudent,” she said.

It is not easy to transform the Church from a clerical culture to a co-responsible culture, Robinson continued, but recovery and reform are necessary for healing. While caring for and loving victims of abuse is primary, she advocated for additional changes including women on all levels of decision-making; holding bishops accountable to lay boards; employing effective selection processes for ordained and lay leaders; and reforming seminaries by including more women on seminary faculties, integrating seminarians into classes with lay counterparts and hiring female faculty.

In a question-and-answer session after Robinson’s talk, Bishop Rhoades affirmed the value of lay involvement in the mission of the Church, saying “I don’t know what I’d do without the help of laity.”

He also gave some insights into the difficulties experienced by clergy and bishops because of the crisis. While the vast majority of abuse cases occurred before the U.S. bishops’ 2002 Charter for the Protection of Children and Young People, recent details about these past abuses have made some people mistakenly think that the abuse is continuing unabated, he said. 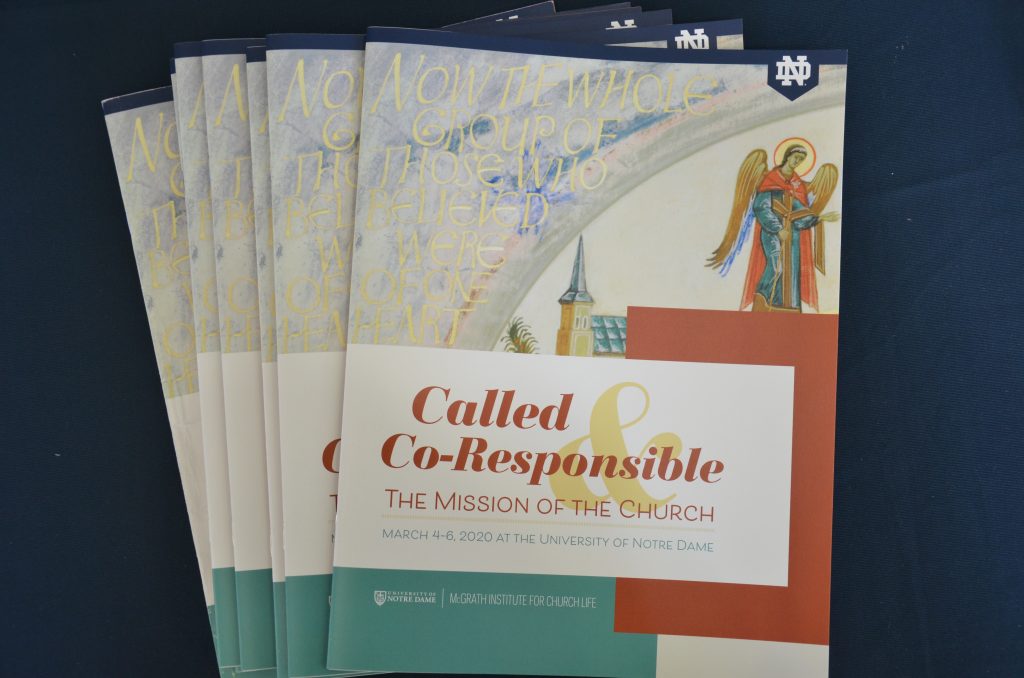 There actually has been a steep decline in Church abuse cases since 2002, and the charter has been revised three times, most recently in 2018. Bishops have tried to be faithful to the charter and have learned from their experiences by, for example, implementing new practices such as making public the list of credibly accused priests, Bishop Rhoades said.

He related two challenges that bishops have faced in dealing with the crisis: the fear of unjust accusations against priests and bishops, and the feeling among some parishioners that a bishop was not fair to a priest in removing him from a parish because of credible allegations, details of which a bishop cannot make public.

Msgr. Michael Heintz, a priest of the Diocese of Fort Wayne-South Bend and academic dean, theology professor and spiritual director at Mount St. Mary’s Seminary in Emmitsburg, Maryland, also addressed the seminary topic touched on by Robinson. He discussed the evolution of seminary training, from the past tendency to spiritualize problems and ignore human formation to the present approach of forming a fully integrated man, with all aspects of his life in balance so that he can best serve God’s people.

“What we can do is help a man recognize his weaknesses as well as his gifts and to live in such a way before God and his formators and his superiors that he allows grace and human help to grow to integrate that better,” Msgr. Heintz said. 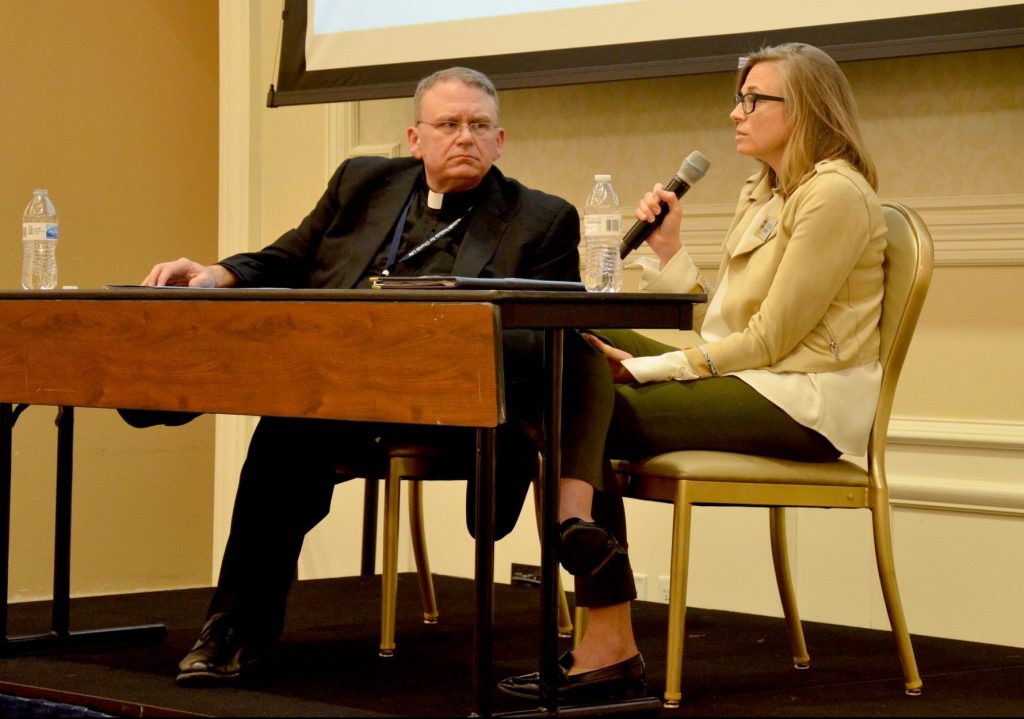 Among the conference’s distinguished presenters were Msgr. Michael Heintz, professor of theology at Mount St. Mary’s Seminary in Emmitsburg, Maryland, and Colleen Moore, director of formation for the McGrath Institute for Church Life. Msgr. Heintz and Moore spoke about forming pastoral leaders for co-responsibility.

Another challenge today is a general distrust of institutions and authority, he said. That trust needs to be rebuilt, which will take time. He noted that 100 years ago, priests didn’t have to work as hard to gain people’s trust.

Priests need to work at that rebuilding “by being men of credibility who are trustworthy because we live lives of integrity,” Msgr. Heintz said. With trustworthiness comes authority, and priestly authority means imitating the spousal love of Christ for His bride, the Church.