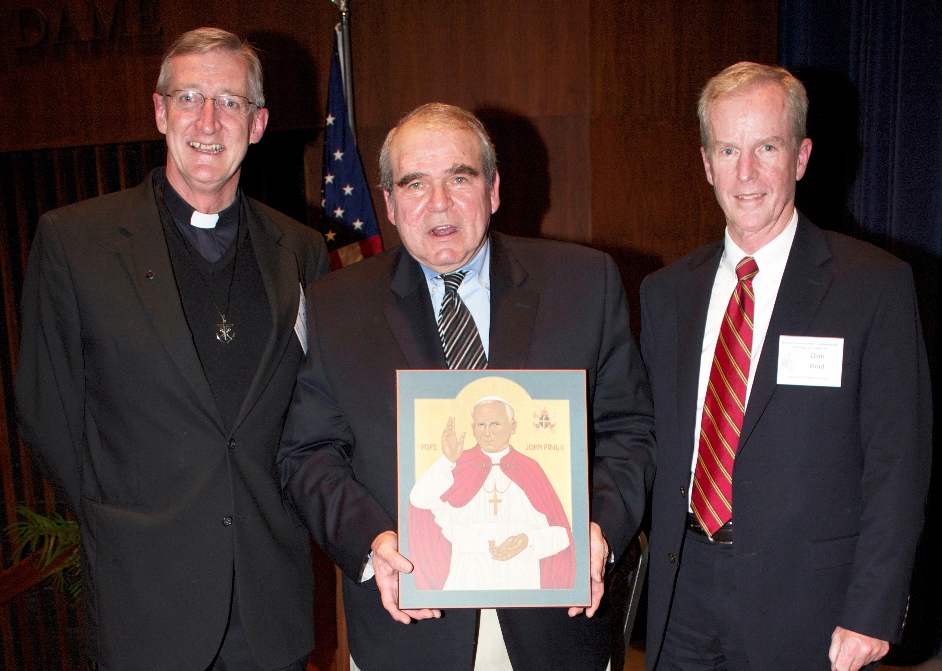 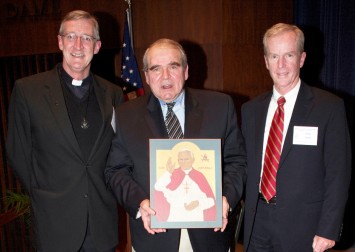 Pictured are Solomon, Miscamble and Briel.

NOTRE DAME — Father Robert Barron, creator and host of the 10-part documentary series “Catholicism,” spoke about evangelizing the culture in his keynote address at the Notre Dame Ethics and Culture Center’s annual conference Nov. 10-12. His message was very simple and direct:

“What does it mean to evangelize? I submit that to evangelize is to announce the good news that Jesus Christ has risen from the dead,” said Father Barron, who is the Francis Cardinal George Professor of Faith and Culture at Mundelein Seminary in the Archdiocese of Chicago.

This evangelization can’t be a private activity, Father Barron stressed, but must be done “publicly and boldly,” and directed to every individual, institution and culture. Furthermore, he continued, the Church must come out from behind its walls to share its life everywhere and with everyone.

There are many ways to evangelize, Father Barron explained, and “the adventure of the spiritual life” is for each individual to discern how his own talents can and should be used in this effort. Catholics should learn their faith tradition, he said, and Catholicism needs to recover “a certain radicality” rather than become “an echo of the wider culture.”

With his keynote address to a standing-room-only audience in Notre Dame’s McKenna Hall Auditorium, Father Barron set the tone for the conference’s topic of “Radical Emancipation: Confronting the Challenge of Secularism.” In the two days following Father Barron’s keynote, 148 papers were presented, and the attendance of 600-plus scholars and students set a record for an Ethics and Culture conference.

In another major address at the conference, philosopher Alasdair MacIntyre, who splits his time between Notre Dame and London Metropolitan University, talked about how a theist — a person who believes in God — should deal with the secularized culture. MacIntyre said that theists base their worldview on the existence of a creator who is unlike any of his creatures. Thus, a theist recognizes a certain moral order.

However, when theism is defeated by secularism, society becomes secularized, and moral relativism replaces the moral order. Theists of various religions need to make themselves more aware of the necessity to frame the debate with secularists, he said.

Theists should be “good listeners,” but rather than becoming victims of their critics, theists need to do something they have so far failed to do:  “Redirect the debate by focusing on the philosophical presuppositions of our critics and making them and their position — rather than theism — the matter for debate,” MacIntyre said.

In another session on “Universities and Secularism,” the presidents of two Catholic colleges discussed the importance of maintaining Catholic identity in our secularized culture, and they shared their methods for doing so.

Stephen Minnis, president of Benedictine College in Atchison, Kan., said that Benedictine has never experienced more success than now, having doubled its enrollment since 2000 to its current level of 1,600. The “secret” to this success, he said, is that a conscious decision was made to be mission-driven with a strong foundation based on the college’s four pillars: Catholic, Benedictine, liberal arts and residential.

If a college calls itself “Catholic,” Minnis said, “You ought to mean it,” and this is “Good, old-fashioned truth in advertising.”

Thus, he said the “blueprint” for Benedictine has been to follow the norms set out in Blessed John Paul II’s 1990 apostolic constitution on higher education, “Ex Corde Ecclesiae” (“From the Heart of the Church”). This does not mean creating a sort of 1950s “theme park” where people can escape from the world, he explained, but rather it means preparing students for the culture, not to retreat from it.

“We think supporting and following the pope and bishops on this is something we ought to do,” Minnis said, and “that has been responsible for our success.”

Holy Cross Brother John Paige, president of Holy Cross College in Notre Dame, Ind., told a similar story. Having been founded in 1966, Holy Cross is the youngest of the Holy Cross colleges in the United States. It formerly was a two-year college, but in recent years re-set its curriculum for a four-year bachelor’s degree.

This re-set of the curriculum, Brother Paige said, was an opportunity to contribute in a practical sense to the Catholic college response to the secular culture. The purpose of a Holy Cross education, he continued, is to inform young people, but also to form them so they and the world will be transformed.

“The grounding construct” for Holy Cross College, Brother Paige continued, is “the competence to see and the courage to act,” thus providing a means for dealing with the secularization of society.

To this end, the Holy Cross practical liberal arts curriculum is built on four pillars, requiring every graduating student to 1) be involved in a professional internship; 2) do service learning in teams; 3) take part in a global experience domestically or with Holy Cross missionaries overseas; and 4) do a “capstone” presentation that articulates the student’s experience at Holy Cross and details how that experience will enable the student to benefit the world and others.

Brother Paige echoed the conviction of Stephen Minnis that the college must be unabashedly Catholic, and he stressed the importance of public witness. He related that at his inauguration ceremony this September, he and the theology faculty said the profession of faith publicly to demonstrate that they are part of the local and universal church.

“If you’re going to talk and say, you also have to walk and do,” Brother Paige said.

This 12th conference of the Ethics and Culture Center was the last conference overseen by David Solomon, a Notre Dame professor of philosophy, who founded the center and has been its director. He announced with great pleasure that the new director will be law professor O. Carter Snead, who plans to continue the annual conferences, with the 2012 event set for Nov. 8-10.