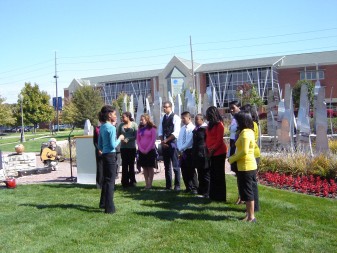 The Voices of Faith group, directed by senior Katie Washington, sings during the healing ceremony.

SOUTH BEND — In recognition of National Domestic Violence Awareness Month, on Oct. 10, men and women concerned about, or themselves victims, of domestic violence gathered under a bright, sunny, blue sky in front of the Madison Center in South Bend to participate in a service of healing.

“This first community gathering to heal domestic violence is the brainchild of Rita Tatum, who is a lay Providence Associate,” says Stacy Davis, an S-O-S (sexual offenses services) volunteer at the Madison Center and professor of religious studies at Saint Mary’s College.

In November of 2007, she and the Sisters of Providence, based in Saint Mary-of-the-Woods, began to do research and development for the event. In March of this year, Rita, who is also an S-O-S advocate, presented the concept to the S-O-S Awareness Committee, which enthusiastically embraced the idea.

It is Tatum’s belief that domestic violence not only hurts the person who is abused, but the whole community.
“I have been a volunteer S-O-S advocate for six years. At an S-O-S in-service a couple years ago, Notre Dame Professor Carolyn Nordstrom presented the way Mozambicans approach violence, including sexual violence, as an illness that the whole community addresses in a healing ceremony. In other words, they felt that in addition to mending injuries of the mind and body, they also needed to heal the ‘collective body’ so that the violence didn’t spread and infect the whole community.”
The presentation sparked a desire to have a similar service for the South Bend area and she spent about a year looking at the healing ceremonies of Muslims, Buddhists, Amish, Christian, Jewish, Native American, etc. Taking common elements from these ceremonies she teamed up with Davis who, together with the S-O-S Awareness Committee, developed and executed the first community service.

To emphasize the broad range of domestic violence, the S-O-S Awareness Committee worked to develop nine life-size silhouettes, representing seniors, adults, teens and children of both sexes. The Awareness Committee gave participants in the healing service ceremonial stoles of many shades and textures of the color purple (the color associated with domestic violence awareness activities) to reflect the diversity of the victims.

Davis sums up an important message. “It’s time to stop the violence that this year has caused Michiana the lives of five mothers and sisters, three fathers, four brothers and a 12-year-old boy. In Indiana this pandemic disease led to 65 deaths and more than 100,000 calls to crisis lines last year.”