BALTIMORE (CNS) — The U.S. bishops approved their statement on the Eucharist with 222 “yes” votes Nov. 17, the second of two days of public sessions during their Nov. 15-18 fall general assembly.

Their OK came a day after their discussion of the document — a discussion that took a drastically different tone than their previous debate about what the document could potentially contain during their virtual assembly five months ago.

At that June gathering, a major focus highlighted whether it would address denying Communion to Catholic politicians who support abortion.

Some bishops said a strong rebuke of President Joe Biden, the nation’s second Catholic president, should be included in it because of Biden’s recent actions protecting and expanding abortion access, while others warned that this would portray the bishops as a partisan force during a time of bitter political divisions across the country.

The document the bishops discussed and approved does not specifically call out Catholic political leaders, but it does more generally point out the seriousness of the sacrament. 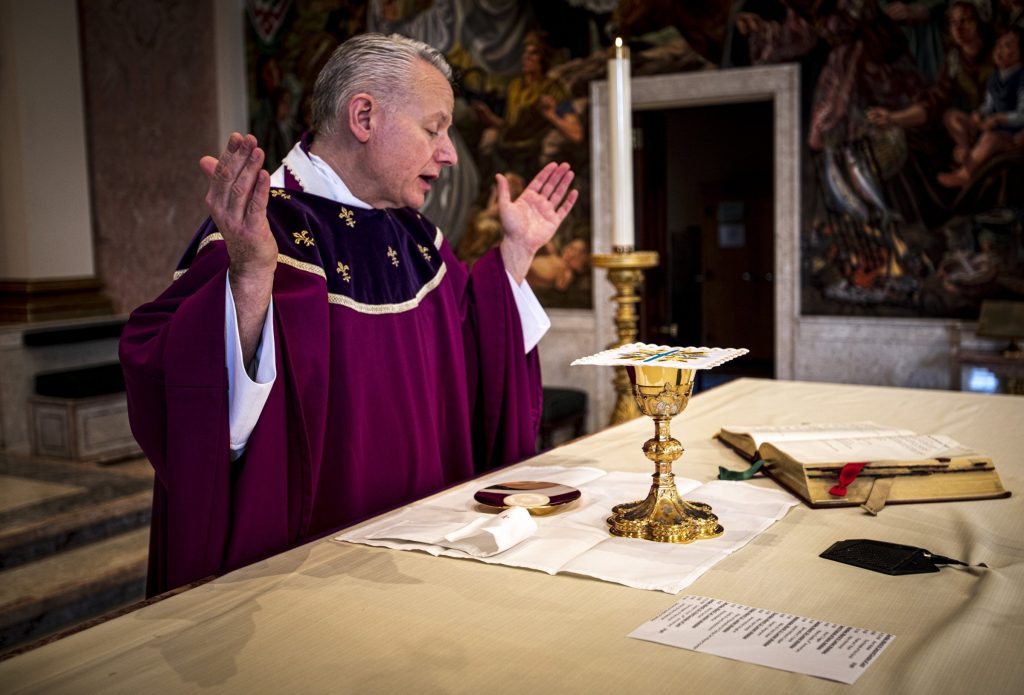 Father John C. Maria prays over the Eucharist at the altar of the Cathedral of St. Catharine of Siena in Allentown, Pa., March 9, 2020. According to Catholic teaching, the bread and wine, upon consecration, become the body and blood of Christ. (CNS photo/Chaz Muth)

The discussion, just prior to the vote, focused on some of the statement’s wording. Specific amendments were approved but additional comments about wording changes that were raised on the floor did not.

One of the bishops, for example, wanted to add the word “etcetera” after a list of vulnerable people the Church was responsible for in order to show its broad inclusion, but the bishops, who had already added to the list to include the unborn, chose not to add the additional descriptor.

As points of discussion, Archbishop Joseph F. Naumann of Kansas City, Kansas, outgoing chairman of the U.S. bishops’ pro-life committee, stressed the prelates must not forget the responsibility they have to “take care of the souls” of Catholic politicians who do not publicly support Church teaching on abortion.

And Bishop Donald E. DeGrood of Sioux Falls, South Dakota, noted that there is a healthy tension for the bishops, to call out what isn’t right but to do so in love and to be united as they find ways to apply this new document in their dioceses.

The document on the Eucharist states: “One should not celebrate Mass or receive holy Communion in the state of mortal sin without having sought the sacrament of reconciliation and received absolution.”

It also says that if a Catholic in his or her personal life has “knowingly and obstinately” rejected the doctrines of the church or its teaching on moral issues, that person should refrain from receiving Communion because it is “likely to cause scandal for others.” 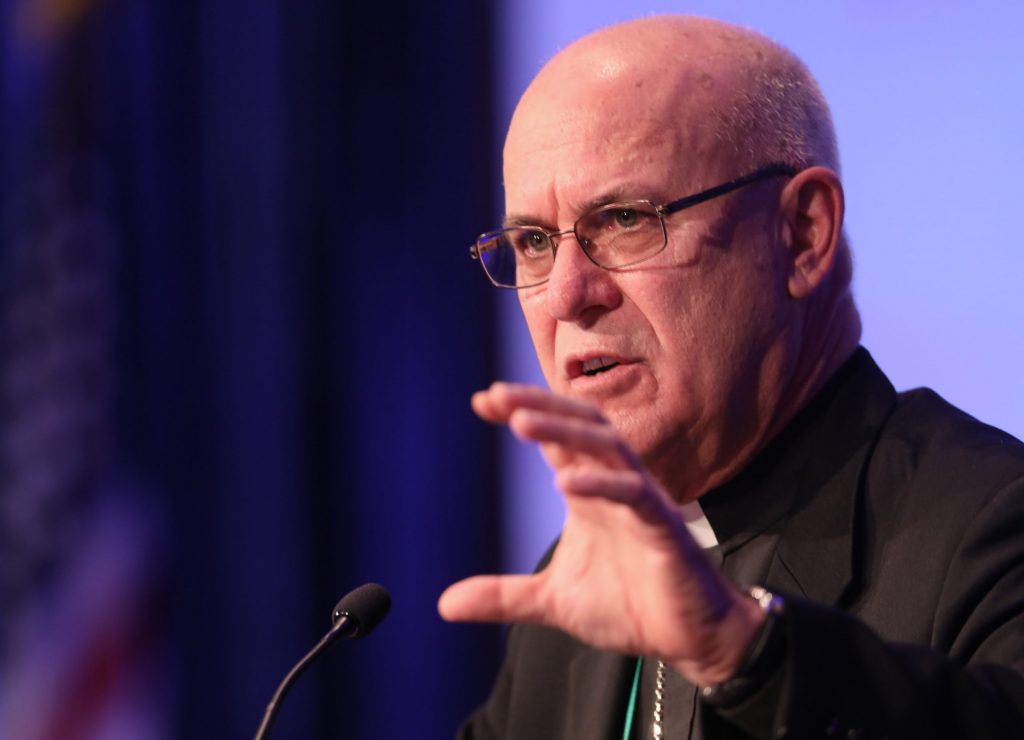 Bishop Kevin C. Rhoades of Fort Wayne-South Bend, Ind., chairman of the U.S. bishops’ Committee on Doctrine, speaks during a Nov. 17, 2021, session of the bishops’ fall general assembly in Baltimore. Due to the COVID-19 pandemic, it is the first in-person bishops’ meeting since 2019. (CNS photo/Bob Roller)

Back in June, at the end of the bishops’ discussion of the document, Bishop Kevin C. Rhoades of Fort Wayne-South Bend, Indiana, chairman of the bishops’ doctrine committee, said the draft would not focus on denying Communion to people but would emphasize the importance of the sacrament.

And in his Nov. 16 presentation of the 26-page statement titled “The Mystery of the Eucharist in the Life of the Church,” Bishop Rhoades said it “addresses the fundamental doctrine about the Eucharist that the Church needs to retrieve and revive.”

In his short presentation to U.S. bishops, followed by just a handful of comments from the floor, the bishop said the document is addressed to all Catholics in the United States and “endeavors to explain the centrality of the Eucharist in the life of the Church.”

He also said it is intended to be a theological contribution to the bishops’ strategic plan and to the bishops’ planned eucharistic revival “by providing a doctrinal resource for parishes, catechists and the faithful.”

Discussion from the floor included a request from Bishop Peter Baldacchino of Las Cruces, New Mexico, that the document include more about the paschal mystery, or the death and resurrection of Jesus.

Bishop Richard F. Stika of Knoxville, Tennessee, wondered how the document would be understood by college students, high schoolers or children, noting that “a lot of it’s over their heads” and they would have to have some kind of theological foundation to grasp it.

“We have these beautiful, beautiful documents that sometimes are just ignored,” he said, suggesting that it should be made “more readable and understandable.”

In response, Bishop Rhoades said the document “as it stands is really meant for adults,” but he could see it being used in high schools with a teacher who would explain it better. He also said it could be developed by publishers as a resource for catechesis for grade school students.

Bishop Timothy L. Doherty of Lafayette, Indiana, said the work put in “laboring over texts should not discourage us,” pointing out that often language falls short but that the Church has many other means at its disposal to express the faith such as music, dance, poetry and visuals.

The draft of the document explains the importance of Communion, often calling it a gift, and uses references from Scripture, prayers of the Church and Second Vatican Council documents to back this up. It also explains, citing words of the saints, how Communion is not just a symbol but the real presence of Christ.

This transformation of bread and wine into the body and blood of Christ, the document says, is “one of the central mysteries of the Catholic faith” which is a “doorway through which we, like the saints and mystics before us, may enter into a deeper perception” of God’s presence.

It notes, almost halfway through, that the Vatican II document “Lumen Gentium” — “The Dogmatic Constitution on the Church” — describes the Eucharist as “the source and summit of the Christian life.” It also says that as Catholics understand what the Eucharist means, they should more fully participate in Mass and also reach out to serve those in need, citing the Catechism of the Catholic Church, which says: “The Eucharist commits us to the poor.”

It concludes with examples of saints who were transformed by their reception of the Eucharist and their deep understanding of what it means.

This heavily footnoted statement also has a pastoral message urging those who have left the Church to come back. It ties this return back to the Eucharist, quoting St. Teresa of Kolkata, who said: “Once you understand the Eucharist, you can never leave the church. Not because the church won’t let you but because your heart won’t let you.”

What the document might say and how it could specifically call out Biden and other Catholic politicians has been disputed for months and has not just been a topic for the U.S. bishops and Catholics across the country, but also involved the Vatican.

Prior to the bishops’ initial discussion of this document, Cardinal Luis Ladaria, prefect of the Vatican’s Congregation for the Doctrine of the Faith, urged the bishops in a letter to proceed with caution in developing a national policy “to address the situation of Catholics in public office who support legislation allowing abortion, euthanasia or other moral evils.”

Pope Francis said on a Sept. 15 flight back from Bratislava, Slovakia, that he preferred not to comment directly on the issue of denying Communion, but he urged U.S. bishops to take a pastoral approach rather than wade into the political sphere.

More recently, after the pope and Biden met at the Vatican Oct. 29, Biden was asked by reporters in Rome if abortion was one of the topics of their meeting and the president said: “We just talked about the fact he was happy that I was a good Catholic, and I should keep receiving Communion.”