WASHINGTON (CNS) — The Eucharist was a major focus of the U.S bishops’ June 16-18 virtual spring assembly.

On June 17, they heard a full presentation on a proposal to draft a document on the “meaning of the Eucharist in the life of the church,” followed by a lengthy discussion and vote. And by a wide margin, announced June 18, the bishops gave the green light for the drafting process to proceed.

The U.S. Conference of Catholic Bishops’ Committee on Doctrine will draft the document and present it for discussion when the bishops reconvene in person in November. The action to move forward passed 168 to 55. There were six abstentions. 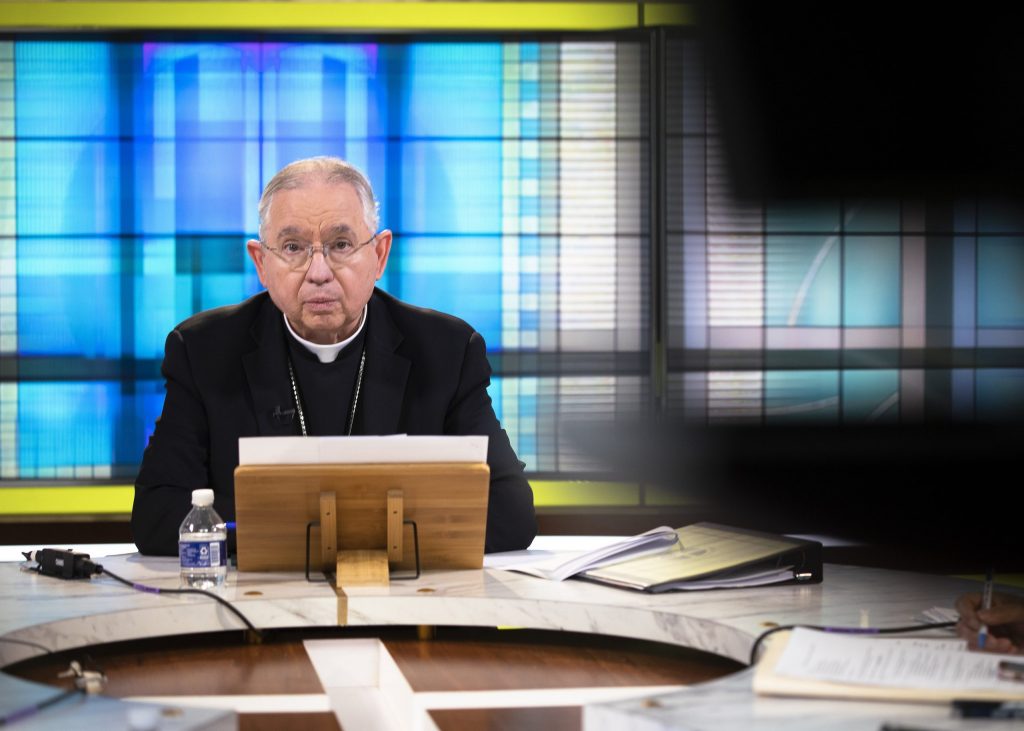 Archbishop José H. Gomez of Los Angeles, president of the U.S. Conference of Catholic Bishops, holds a news conference at the USCCB headquarters in Washington June 16, 2021, the first day of the bishops’ three-day spring assembly, held virtually due to concern over COVID-19. (CNS photo/Tyler Orsburn)

For more than two hours, 43 bishops expressed differing views about drafting such a document. Some stressed the document was necessary to provide clarity about the significance of the Eucharist, while others questioned its timing and if it could be perceived as fracturing the unity of a Church already faced with numerous challenges.

Although the bishops reached no consensus during the discussion, most of those who spoke during the comments’ session welcomed the idea of strengthening teaching about the Eucharist. 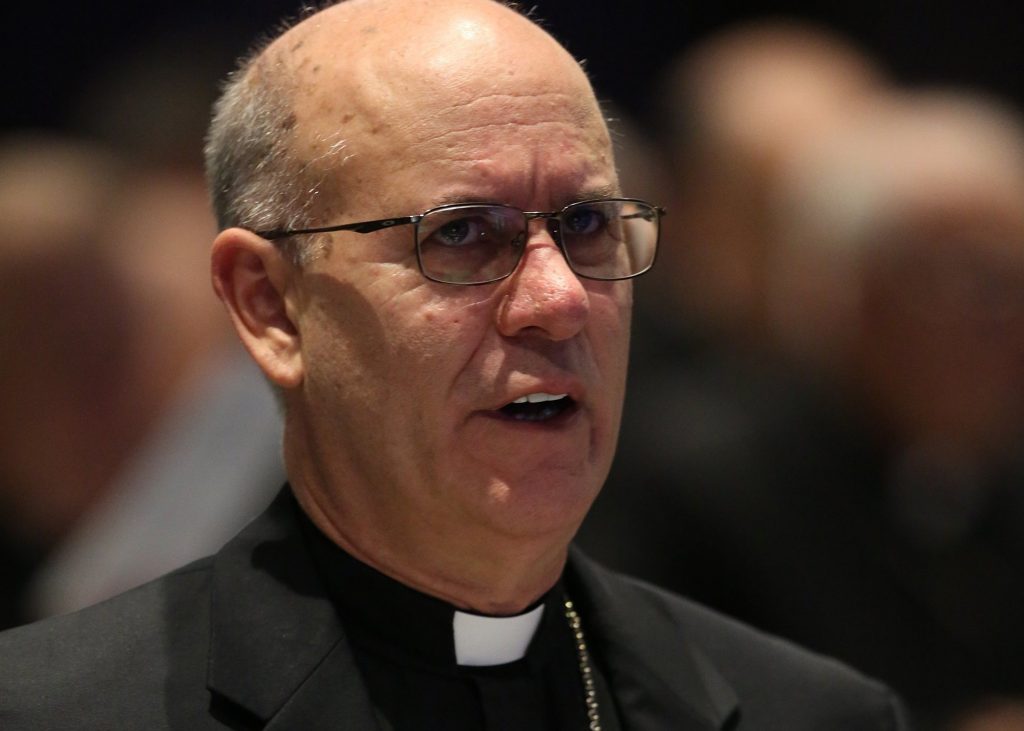 Bishop Kevin C. Rhoades of Fort Wayne-South Bend, Indiana, chairman of the doctrine committee, presented a proposed outline to the bishops in a prerecorded message.

He said this was developed in light of the decline in Catholics’ belief in the Real Presence in the Eucharist as well as the long absences from regular Mass attendance, which may have led to people placing less significance on the Eucharist in their lives.

The Communion document also was a key point of discussion in the news conferences June 16 and 17. Bishop Rhoades June 17 stressed that creating national norms was never the intent behind a proposal to write a new statement on the Eucharist. He said it would be aimed at providing guidance for bishops.

“We have taught in years past about Catholics in political life, the importance of adherence to church teaching in the document on worthiness to receive holy Communion, back in 2006,” Bishop Rhoades said. “But with this new strategic plan that’s going to be focused on the Eucharist, this three-year plan, we have to teach this again, on different levels.”

The bishop was referring to a multiyear National Eucharistic Revival initiative that is part of the U. S. Conference of Catholic Bishops’ 2021-24 strategic plan. The revival has been in the planning stages for over a year.

This revival is meant to place added emphasis on the Eucharist at all levels of the Church in the United States beginning next summer and culminating in a large-scale national event in 2024.

The initiative aims to “renew the church by enkindling a living relationship with the Lord Jesus Christ in the holy Eucharist,” said Auxiliary Bishop Andrew H. Cozzens of St. Paul and Minneapolis, chairman of the USCCB’s Committee on Evangelization and Catechesis.

In a June 18 presentation to the bishops, he described it as a “movement of Catholics across the United States, healed, converted, formed and unified by an encounter with Jesus in the Eucharist — and sent out in mission.”

At the end of three years, he said, it is hoped over 100,000 missionaries will be ready to “share the love of Jesus Christ in the Eucharist with our world.”

During their virtual assembly, the bishops also discussed their efforts on immigration, Native American/Alaskan Native ministry, catechesis and pastoral frameworks for youth and young people and marriage and family ministries.

The bishops also voted to approve three sets of translations from the International Committee on English in the Liturgy, or ICEL, on: the Blessed Virgin Mary, Mother of the Church; additional intercessions and psalter concluding prayers for the Liturgy of the Hours; and the Order of Penance.

The Vatican Congregation for Divine Worship and the Discipline of the Sacraments now needs to issue a “confirmatio” before the translations can be used.

Archbishop Salvatore J. Cordileone of San Francisco June 16 gave a presentation on the proposed “Pastoral Framework for Marriage and Family Life Ministry in the United States: Called to the Joy of Love.”

He is chairman of the bishops’ Committee on Laity, Marriage, Family Life and Youth, which drafted the document.

The bishops approved it 212 to 13, with four abstentions.

They also were asked to authorize development of a new formal statement and comprehensive vision for Native American and Alaska Native ministry which they approved 223 to 6.

“A pastoral plan will help reassure Catholic Natives that their ministry has a high priority in the church,” said Bishop James S. Wall of Gallup, New Mexico, chairman of the USCCB’s Subcommittee on Native American Affairs. He said the last time the general assembly passed a major pastoral plan for Native Americans was in 1977.

In a 222-7 vote, the bishops also approved a new national pastoral framework on accompanying youths and young adults in the Church.

Dallas Bishop Edward J. Burns, a member of the bishops’ Committee on Laity, Marriage, Family Life and Youth, introduced the proposal. The committee will develop it to be presented to the bishops for review at their November 2022 general assembly.

He said the pastoral framework would be formed in light of “Christus Vivit” (“Christ Lives”), Pope Francis’ 2019 reflections on the previous year’s Synod of Bishops on young people.

Bishop Frank J. Caggiano of Bridgeport, Connecticut, chairman of the bishops’ Subcommittee on the Catechism, spoke to the bishops about challenges his committee faces in overseeing how catechetical works conform to the Catechism of the Catholic Church.

To help with this, he said, he hopes to form an institute that would involve bishops, diocesan officials and the writers, editors and consultants of catechetical materials and would provide ongoing formation and mentoring.

Ahead of World Refugee Day June 20, the bishops were told that many U.S. worship sites — from chapels to cathedrals — seem to be unaware of refugee, immigrant, migrant and other “people on the move” Catholics near them.

“There is a widespread lack of awareness of the presence of the communities by Catholic worship sites,” said Bishop Joseph J. Tyson of Yakima, Washington, chairman of the U.S. bishops’ Subcommittee the Pastoral Care of Migrants, Refugees and Travelers June 18.

The subcommittee contracted the Center for Applied Research in the Apostolate to conduct a survey of U.S. worship sites to collect data on the movement of Catholics throughout the country.

CARA found that the Archdioceses of Los Angeles, Miami, Seattle, Atlanta and Galveston-Houston are among those U.S. archdioceses with the greatest number of people passing through their territories.

Auxiliary Bishop Mario E. Dorsonville Washington, chairman of the bishops’ Committee on Migration, gave a brief presentation on a June 1-2 gathering of Catholic leaders on immigration.

Prelates from the U.S., Central America and Mexico, along with those in charge of various prominent Catholic organizations, met at Mundelein Seminary outside Chicago to talk about welcoming migrants, advocating for them and exploring the causes that force many to leave their home countries.

Some of Archbishop Pierre’s remarks June 16 seemed to predict the difficulty the bishops could face in debating approval of the drafting of the Communion document.

“At the heart of dialogue is the communication of one’s own personal life to others,” he said, adding the goal of such dialogue “should be unity and not merely doctrinal and juridical unity.”

Archbishop Gomez said the events of the past year will likely shape the vision of the Church “for years to come.” That’s why unity is important, he added. He also noted that unity doesn’t mean bishops will never disagree, because even the apostles disagreed, “but never about the truth of the Gospel.”

In a June 16 report, Scott Voynich, chairman of the National Advisory Council, said the group of lay, clergy and religious members were particularly in favor of the bishops’ National Eucharistic Revival initiative.

He said the council was concerned about a lack of clarity on the Eucharist among Catholics and felt the bishops should explain this better, but its members also were concerned the plan could be seen as a burden, not an inspiration, for priests.

In a report to the bishops June 17, Suzanne Healy, chairwoman of the National Review Board, noted that although major steps have been taken to help achieve healing and reconciliation with survivors of clergy sexual abuse, much work remains ahead for the U.S. Catholic Church.

She said transparency remains a key concern of the review board and thanked bishops and eparchs who have released lists of clergy with substantiated abuse allegations including those who are deceased and removed from ministry.

The bishops also gave their go-ahead June 17 to two dioceses to continue their efforts to make their case for a priest and a brother to be considered for sainthood.

The men are Father Joseph Verbis Lafleur of the Diocese of Lafayette, Louisiana, an Army chaplain who died saving others in World War II, and Benedictine Brother Marinus of St. Paul’s Abbey in Newton, N.J., who before he joined religious life, was Capt. Leonard LaRue, known for his heroism while serving in the Merchant Marine during the Korean War.