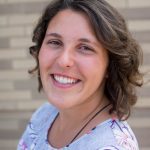 Young people straight out of high school are often searching for meaning in their lives; ways to be good stewards of their talents. Colleen Schena has taken a desire to spread the Gospel of Jesus Christ into her college life through missionary work.

A native of Mishawaka and alumna of Marian High School, Schena is currently a senior at Marian University in Indianapolis, studying theology with minors in biology and French.

Due to the influence of Franciscan brothers and sisters in Mishawaka, Franciscan spirituality has become a strong influence in Schena’s life.

Her most recent involvement was with the Missionary Disciples Institute at Marian University. The institute, which ran June 22-26, was a leadership summit in which high school students — freshmen to juniors — could come together to learn and grow as future leaders. Based on the Acts of the Apostles and the joy of the Gospel, 2020 marked the second year Schena had committed her time and talent to the institute as a mentor.

Mentorship consisted of facilitating small-group discussions, witnessing about her own life and leading games and prayers. “There are five tracks for MDI,” Schena stated. All five develop the tools necessary to become servant-leaders.” Schena used her experiences to encourage the practices of service to younger students who long to live out their faith. 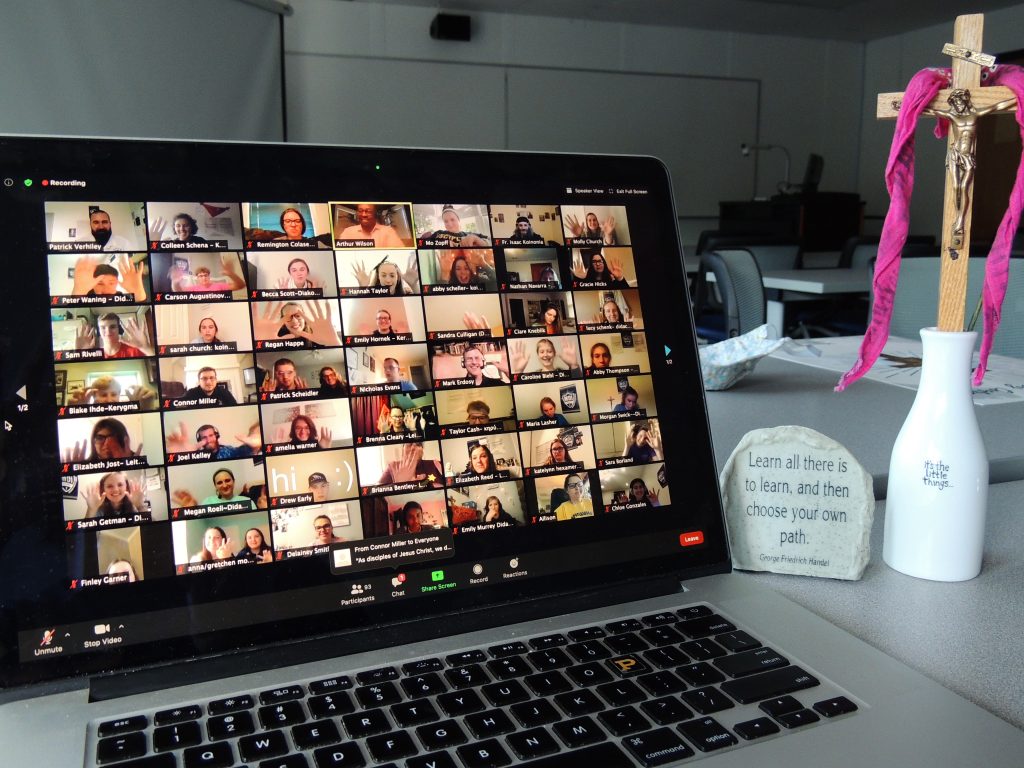 Colleen Schena
Members of the leadership team of Missionary Disciples Institute give a round of applause to one of their members during a virtual meeting. MDI mentor Colleen Schena, second from left at top, is a Marian High School graduate who has let the Lord lead her to several service projects and faith development programs like MDI.

Though MDI is typically a one-week, on-campus experience, with the COVID-19 restrictions this year planners decided to take it to an online platform. Through creative refiguring they found ways to keep students engaged by giving breaks between sessions and including think tanks, breakout sessions and opportunities for participants to celebrate a virtual Mass. Instead of the usual limit of 50 students, MDI was able to support 86 in this online format.

Missionary Disciples Institute is only a part of the missionary work Schena has been involved in throughout her time at Marian University. Patrick Verhiley, director of recruitment for the San Damiano Scholars Program for Church Leaders and another native of the South Bend area, said he knew from the first time he met her she would be a good fit for that program as well.

“I heard she was very involved in the pro-life movement and very devout in the practice of her faith over at Marian High School,” he related. “In meeting with her in person … I remember her passion came through the more I spoke about the San Damiano Scholars. We decided to bring her into the program because of her openness to discern God’s will for her life.”

As a San Damiano Scholar, Schena was required to complete eight hours of service a month, along with attending monthly meetings and working toward a minor in pastoral leadership. “It’s an opportunity for faith formation, but also for helping other people come deeper into their faith,” Schena said.

Verhiley has witnessed firsthand Schena’s spiritual growth. “Colleen has come to find herself and who God is calling her to be … She’s not ashamed of her faith and is frequently leading others to become better disciples of Jesus.”

Schena had previously set her mind on attending Franciscan University at Steubenville in Ohio before she learned about the San Damiano Scholarship and visited the Marian University campus. Marian “felt like home,” so she went ahead with the scholarship process.

Part of the process at the time were overnight interviews and meeting other potential students. During a session where students could ask each other questions, Schena asked for intentions so that she could pray for each person who was there.

Since coming to campus, Schena, who was also a former intern for the Secretariat for Communications Office of the Diocese of Fort Wayne-South Bend, has become very involved in several different ministry programs. “In the spirit of being a missionary disciple, there’s equal parts reflection, prayer and action. In what I’m a part of, I try to keep that in balance.”

Schena traveled with Marian University students on two of their alternative break programs in which they could choose be of service to others rather than take vacation time for themselves. 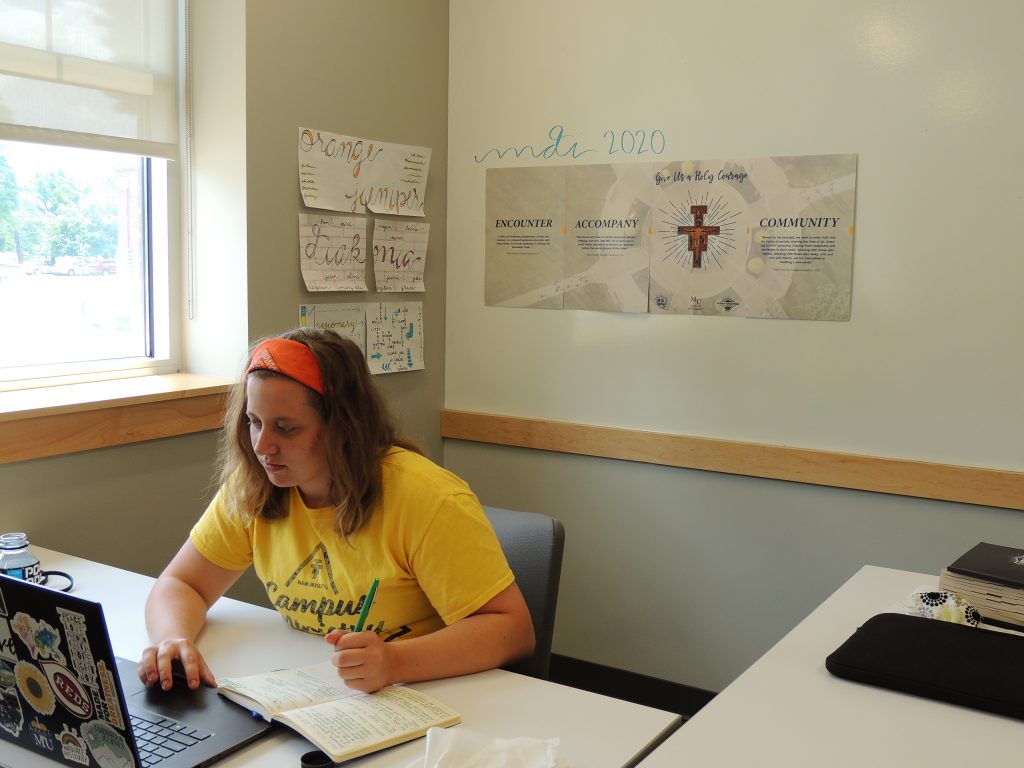 Colleen Schena
Marian University mentor Sara Roell attentively listens to students’ discussion in her broadcasting space. Colleen Schena, a Marian University senior from South Bend, photographed Roell recently as one of her many involvements with Catholic service initiatives, including communications.

She was part of the group that went to Tohatchi, New Mexico, to serve on the Navajo Reservation to lay drain pipes and clean the home of a woman who was battling cancer. Some of their service simply meant interacting with the Navajo people, listening to their stories and connecting with them, which she said was wonderful.

This year’s service trip included the locations of Campton and Jenkins, Kentucky, the latter of which was built beside Elkhorn Lake. A 108-year-old dam keeps the lake’s water from flooding city streets. The group canvassed neighborhoods to ensure residents had emergency action plans in case the dam overflowed, as had happened earlier in the year. The dam is in need of repairs and 30% of the town is built below it.

Both Jenkins and Campton have sizeable populations that live at or below the poverty level.

Along with other Marian University students, Schena also began an organization called “Common Threads” for her senior capstone project. Common Threads is a sustainable method of procuring and maintaining clothing that aims to keep wearable articles of clothing from ending up in landfills or water sources. The apostolate is based on the passage in Chapter 25 of Matthew’s Gospel, which speaks of the final judgment and separating those who helped others in the Lord’s name from those who did not.

Common Threads is located in Indianapolis and accepts donations — particularly of quality pieces of winter and business apparel — to resell at a low cost. The organizers are also looking to offer sewing lessons so that anyone interested can learn how to maintain and extend the life of their clothing. “Any little way that I as a single person in Indiana can address it in a way that embodies the Gospel, that’s a way I want to pursue,” Schena said.

While she might not know what God has planned for her after graduation, Schena is confident that she will continue serving God and bringing others to a greater faith in Him.