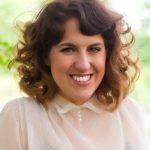 Father Ben Muhlenkamp talks to a College Crew attendee during the social hour at the June 28 session at St. John the Baptist Church in Fort Wayne.

The weekly College Crew program provides an outlet for diocesan college students to connect and learn about their faith in a casual environment in the summer months.

Seminarian Mark Hellinger, who’s going into his third year of study, is one of the organizers.

“The whole premise of College Crew is to bring college students together while back home and see other students living faith,” he said, adding that, “it’s a community building activity.”

According to Hellinger, College Crew is Father Benjamin Muhlenkamp’s brainchild, and the specifics vary each week. In general, there is always social time, devotion and a talk to conclude the evening. On June 28, the program was held from 7-9 p.m. at St. John the Baptist parish in Fort Wayne.

On average about 50 students attend. There are a few regular attendees and a sense of comradery. But the most important aspect is the spiritual one.

“During these college years, life can get confusing and we want to promote an event in which young Catholics can be strengthened in their faith,” said Father Mulenkamp.

Sometimes faith can be pushed to the periphery in college, especially when youth don’t attend a Catholic institution. That’s why the communal nature of College Crew is so important.

“It’s critical that young people are around other young people who share the faith so they’re not alone in discipleship,” he said. It also gives the confidence to witness faith and fall more deeply in love with Christ.

Chris Stuck is one young person who has felt welcomed by the College Crew community. A recent graduate of Indiana University-Purdue University Fort Wayne, he attends St. Vincent de Paul. A former Lutheran, he found the Catholic faith and it really “spoke” to him, as he put it. He met some friends at IPFW who identified as Catholic, which affirmed his faith. “They really spoke to what the (Catholic) Church is,” he said.

Phillip Litchfield, a junior at IPFW, has also found College Crew to be gratifying. He said he appreciates the community aspect, as the group is full of “a lot of young people full of life” and deep in faith. 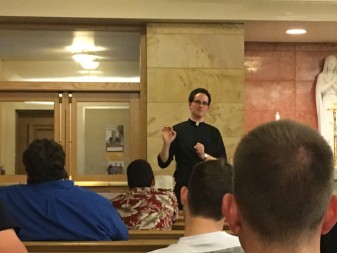 Father Royce Gregersen lectures on the spiritual aspect of voting and the need for an informed approach.

Following social time and adoration on June 28, Father Royce Gregerson was invited to speak about the challenges of voting as a Catholic. The current parochial vicar at St. Charles Borromeo and chaplin at IPFW, Father Gregerson recently returned from studying in Rome.

Voting is something Catholics ought to take seriously and approach with prayerful consideration. There is a certain power that rests in each one of us that needs to be acknowledged, he said.  As Catholics, we can’t close ourselves off from the outside world. Rather “we have to be engaged in the process,” he said. That can be voting or running for office. To that end, he said there’s a need for “good, committed, Catholic leaders.”

Speaking of good, he provided an explanation of the Catholic concept of the common good and how it should enter the equation when evaluating political candidates.

“The Church is not a group within society,” he said. “All people are destined to the Church. The good of the Church is the common good.”

He cautioned against a utilitarian approach. The common good is not to be confused with the greatest good for the greatest number of people, citing the Church’s teaching on the preferential option for the poor.

Making an informed decision in the voting box is hard enough, and when you add faith into the mix it can be a contentious one. According to Father Gregerson, Catholics should avoid glorifying one political party over another.

“A true Catholic shouldn’t feel at home in either of the major American political parties,” he said. “Each holds positions contrary to Church teachings.”

His advice: Don’t vote on a whim or because of party affiliation. Do it as a Catholic and with Catholic teaching in mind. For further reference, he recommends the Catholicism of the Catholic Church and the Compendium of the Social Doctrine of the Church.