WHEELING, W.Va. (CNS) — Violence comes in many forms, but its goal is always control, Bishop Mark E. Brennan of Wheeling-Charleston said in his homily at the fourth annual national vigil Mass marking October as of Domestic Violence Awareness Month.

Violence in the home, Bishop Brennan said, is common, not sporadic like epidemics.

Whether it is physical, verbal, emotional, economic, or even spiritual, he said, it seeks to tightly control the life of another. While some men are its victims, he said, it is overwhelmingly women who are the victims of domestic violence by men who usually have an intimate relationship with them — usually their wives or girlfriends. 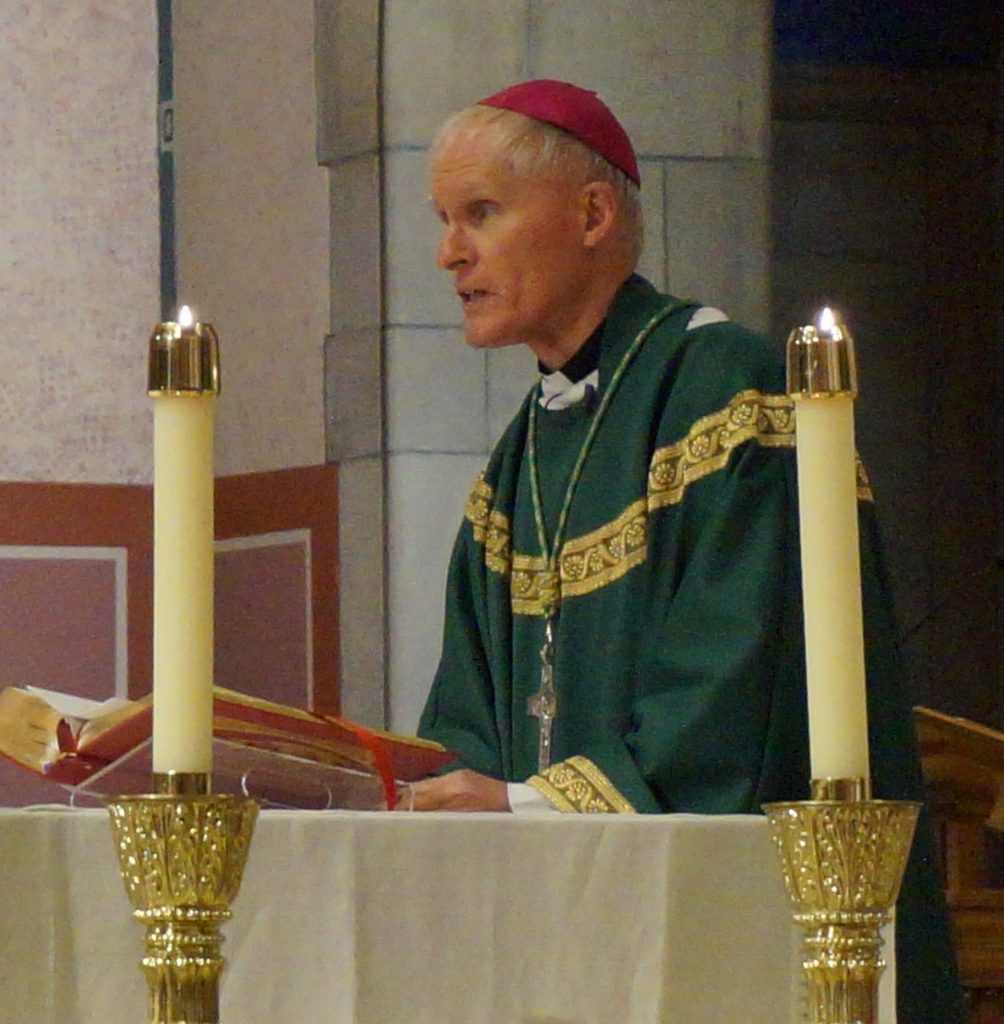 Bishop Mark E. Brennan of Wheeling-Charleston, W.Va., delivers the homily during a vigil Mass he celebrated Oct. 3, 2020, at the Cathedral of St. Joseph in Wheeling, W.Va., in observance of October as Domestic Violence Awareness Month. (CNS photo/Colleen Rowan, The Catholic Spirit)

“We don’t like to talk about it,” the bishop said, “but the code of silence lets it, like a virus, go unchallenged to keep doing harm to the victim.”

Bishop Brennan celebrated the Oct. 3 Mass at the Cathedral of St. Joseph in Wheeling. It was co-hosted by the U.S. Conference of Catholic Bishops’ Secretariat for Laity, Marriage, Family Life and Youth and livestreamed on the Wheeling-Charleston Diocese’s YouTube channel and Facebook page.

In his homily, the bishop recalled that as a young priest, a woman tried to get across to him in subtle language that her husband was hurting her.

“I was too naive to grasp what she was saying, or to wonder why she was wearing a long-sleeve blouse on a warm summer day,” Bishop Brennan said, “So I was of no help to her.”

Some years later, the bishop said, he was doing sidewalk counseling outside of an abortion facility and managed, with others, to convince a young woman not to go in for an abortion.

“Her boyfriend was forcing her to get it, she said, and she was afraid of him,” Bishop Brennan said. “Did she want to leave him? I asked. Yes, she said, but she wasn’t sure how. She needed help. I drove her to their apartment, helped her load her things into my car and took her to the home of some friends.”

In her case, the violence was obvious enough to recognize it, Bishop Brennan said, indicating that it was the man’s desire to control her by insisting that she abort her child against her own good judgment. Bishop Brennan said he later took a seminar on domestic violence and learned that violence might be physical, but also could be psychological.

An abuser will isolate his victim from family and friends to increase dependency on him, he said, adding that abusers also will stalk victims to instill fear.

In a family suffering domestic violence, the bishop said, children are victims as well. There is a high correlation between violence toward women, and violence toward children, he said.

“Children suffer from seeing their mother treated as a thing, not a woman deserving of respect,” Bishop Brennan said. “Boys may assume that this is how you treat women, and girls might grow fearful of men. If a child tries to stop the violence toward his or her mother, the man often beats the child.”

“Our American bishops have said, ‘We state as clearly and strongly as we can that violence against women inside or outside the home is never justified. It is sinful, and often a crime as well. The person being assaulted needs to know that acting to end the abuse does not violate the marriage promises,’” Bishop Brennan said, quoting their pastoral, “When I Call for Help: A Pastoral Response to Domestic Violence Against Women,” released in 1992.

The document was reissued in 2002 to mark the 10th anniversary of the document. It encourages pastors to dedicate at least one weekend of October to inform people how they can recognize and respond to the signs of abuse.

Many ask why women stay in these violent homes, the bishop said.

“Some feel pressured to keep the family together and all costs,” he said. “Some belong to ethnic groups that frown on revealing a family problem to outsiders. Women of color may distrust the legal system, immigrants may not know how to use it, while women in rural communities — we have many in West Virginia — may find themselves more isolated and with fewer resources.

“And there’s always that fear that the violence could get worse if the man suspects the woman is planning to leave.”

Some men resort to murder to assert their absolute control over a woman, the bishop said.

He prayed “for any woman suffering domestic violence will come to understand that it is always wrong, never justified by God’s Commandments; and that there is a way out, if it is carefully planned.”

Bishop Brennan noted the National Domestic Violence Hotline is 800-799-7233, which he said was being flashed on the screen in the livestream of the Mass. Victims also can approach a priest or other minister of her religion for help.

Priests and others who work for the Church need to know about domestic violence and how to help, said Bishop Brennan, who organized workshops on domestic violence for staff of his last parish. He plans to do the same, he said, for clergy and parish staffs in the statewide Wheeling Charleston diocese.

Men who use violence to control women come from every race, religion and socioeconomic status, Bishop Brennan said. For men who accept it, he said, help is available as some may benefit from therapy or anger management courses.

“Men who hurt women can change,” Bishop Brennan said. “Our faith believes in conversion, that God’s grace can help us to change for the better, to love others as God loves us. But no woman has to stay with a man who refuses to stop being violent. All of us can pray for those who suffer from this rejection of true love, and can offer them our support.”

The Church’s long-term goal in speaking about domestic violence is to foster good marriages and happy families, Bishop Brennan said. “We want marriages and families filled with light not with darkness; to sail on calm seas, not through endless storms.”

Bishop Brennan thanked God that there are many good husbands and fathers who love their wives and their children.

“I have known a great host of them,” he said. “My prayer is that there will be even more. A good husband will give his family the benefit of his energy and wisdom and will rejoice to see his wife and children grow in healthy exercise of freedom — the freedom to do good. Then the Lord’s vineyard, the family, which is the domestic church, will produce good grapes, not bitter grapes, and will give God a rich harvest.”

Editor’s Note: The text of the USCCB’s pastoral Statement “When I Call for Help” is available in English and Spanish at https://bit.ly/3nQxhht.

Rowan is executive editor of The Catholic Spirit, newspaper of the Diocese of Wheeling-Charleston.