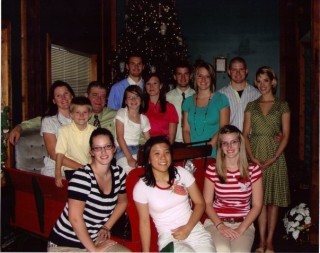 Minjung, a Korean exchange student, is shown in the front row, center, with the Joe and Dot Cochran family. The Cochran family of Columbia City are the recipients of the 2008-2009 Academic Year in America’s Host Family of the Year award.

COLUMBIA CITY — The Cochran family of Columbia City are the recipients of the 2008-2009 Academic Year in America’s Host Family of the Year award.

The Joe and Dot Cochran family hosted a Korean exchange student, Minjung, for 10 months. After the exchange, Minjung wrote an essay praising the family for her excellent experience. Hers was chosen among 2,000 nominations in the country by the organization Academic Year in America.

Being a host family, however, was not always at the forefront of their minds. It was through the initiative of their daughter Betsy, who submitted their name to the organization that this came to fruition.

A chain of events escalated when Bishop Dwenger Assistant Principal Jason Schiffli called to ask the family if they would host a student. After some discussion, the family decided to pursue it.
“We did it for (the children),” Joe said.

The family was chosen in particular because of their size. With eight children, there is never a dull moment in the Cochran household.

Minjung, coming from a small family, wanted to experience a different lifestyle, so she was drawn to the Cochran’s profile.

Minjung, 15, easily assimilated into American culture through the help of the family. She made the most of her experience at Bishop Dwenger as a stellar student and show choir member. American high school was “an entirely new world to her,” Joe noted, but the Dwenger community welcomed her with open arms.

Her home life was no different. Joe said he was conscious about making her feel like any other family member, rather than a guest in someone’s home, for better or for worse. This meant Minjung had her share of responsibility, doing chores and being disciplined as well.
“She really became an active part of the family,” Joe reflected.

It’s clear from Minjung the feeling is mutual:

“The Cochran family treated me like one of their own,” Minjung said in her nomination letter. “It was really easy to join their family. They’ve made me feel comfortable in their family.”

One thing the Cochrans miss the most about Minjung is her cooking skills. She would often cook traditional Korean food. One time she prepared a four-course meal for her youth group. In addition to cooking, Minjung was passionate about her faith. Joe said she loved her religion and excelled in the theology courses at Dwenger.

Despite the cultural differences, Joe contends Minjung shares a lot of similarities with her American peers.

“She was really nothing different than an (ordinary) 15-year-old girl,” he said.

In hindsight Joe and Dot have some advice for would-be host families:

“You have to have a lot of patience,” Dot cautioned.

For more information about Academic Year in America, go to www.ayabroad.org.