WASHINGTON (CNS) — The chairman of the U.S. bishops’ domestic policy committee said the federal emergency “bridge loans” that dioceses, parishes and other Catholic entities applied for provided a lifeline, allowing “our essential ministries to continue to function in a time of national emergency.”

“The Catholic Church is the largest nongovernmental supplier of social services in the United States,” said Archbishop Paul S. Coakley of Oklahoma City. “Each year, our parishes, schools and ministries serve millions of people in need, regardless of race, ethnicity or religion.”

“The novel coronavirus only intensified the needs of the people we serve and the demand for our ministries,” he said. “The loans we applied for enabled our essential ministries to continue to function in a time of national emergency.” 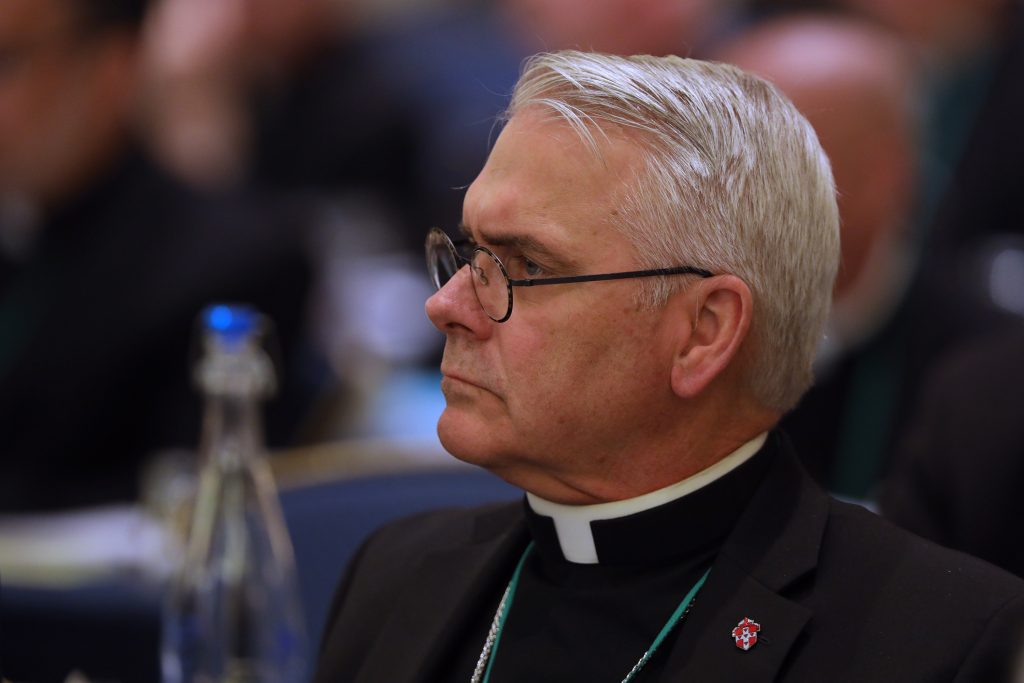 Archbishop Paul S. Coakley of Oklahoma City listens to a speaker during the fall general assembly of the U.S. Conference of Catholic Bishops in Baltimore Nov. 12, 2019. (CNS photo/Bob Roller)

Archbishop Coakley, chairman of the U.S. Conference of Catholic Bishops’ Committee on Domestic Justice and Human Development, made the comments in a statement released late July 10 in response to an Associated Press story claiming the Catholic Church “used a special and unprecedented exemption from federal rules to amass at least $1.4 billion” in federal loans.

The AP story described the loans as “the church’s haul” and claimed the total amount might “have reached — or even exceeded — $3.5 billion, making a global religious institution with more than a billion followers among the biggest winners in the U.S. government’s pandemic relief efforts.” The news service said its July 10 story was based on its analysis of recently released federal data.

“The Paycheck Protection Program was designed to protect the jobs of Americans from all walks of life, regardless of whether they work for for-profit or nonprofit employers, faith-based or secular,” Archbishop Coakley said.

“The shutdown orders and economic fallout associated with the virus have affected everyone, including the thousands of Catholic ministries — churches, schools, health care and social services — that employ about 1 million people in the United States,” the archbishop said.

“These loans have been an essential lifeline to keep hundreds of thousands of employees on payroll, ensure families maintain their health insurance, and enable lay workers to continue serving their brothers and sisters during this crisis,” he added.

By some estimates thousands of individual churches, schools, food pantries and other social service programs would have shuttered all around the country were it not for federal loan program.

Even with the emergency loans, “more than 100 Catholic schools have announced that they plan to close, with hundreds more facing an uncertain future,” Archbishop Coakley said. “Businesses, hospitals, schools, and churches all across the country are facing many of the exact same problems.”

The latest school closures came July 9 in the Archdiocese of New York and the Diocese of Brooklyn, New York. The archdiocese announced that 20 schools will not reopen in the fall because of the financial fallout caused by the novel coronavirus pandemic. Archdiocesan education officials also announced three schools will merge. About 2,500 students and 350 staff members in the archdiocese will be affected by the closings.

The Brooklyn diocese announced it will close six schools and noted these schools have more than $630,000 in outstanding tuition payments.

The diocese said the schools it is closing have experienced declining enrollment for the last five years, but registrations dropped off significantly as the pandemic took hold of the metropolitan area.

“We will continue advocating for everyone negatively affected by this terrible pandemic, praying for all the sick, for all who have died and are in mourning, and especially the poor and vulnerable at this time of great need,” Archbishop Coakley said in his statement.

In late April, statistics compiled by the Diocesan Fiscal Management Conference showed that 8,000 parishes, 1,400 elementary schools, 700 high schools, 104 chanceries, 185 Catholic Charities agencies and 200 other diocesan organizations in 160 dioceses had applied for assistance at that point.

The church entities that received assistance were able to “sleep better knowing help is on the way and for now they do not have to lay staff off,” Patrick Markey, executive director of the conference, told Catholic News Service.

Markey also told CNS that church entities that were not funded in the first round or applied after the original allocation of federal money was exhausted had already applied or planned to file applications as new monies flowed into the program.

In early April 3, Congress approved — and President Donald Trump signed into law — the $349 billion Paycheck Protection Program as part of a $484 billion emergency relief measure developed in response to the economic fallout caused by the spread of COVID-19. Congress later allocated an additional $310 billion for the loan program, which is administered by the Small Business Administration.

According to CNN, more than 4.8 million small business owners have utilized the program. On June 30, the U.S. Senate extended to Aug. 8 the deadline to apply for the loans. The extension came as over $130 billion allocated to the program remained unused.

The Paycheck Protection Program loans are partly “forgivable,” meaning the money does not need to be repaid if the employer uses the money for payroll costs, mortgage, rent and utilities as required by the program.

The AP story took four Catholic dioceses to task for suing the federal government to receive loans, “even though they entered bankruptcy protection” in response to hundreds of claims of abuse by priests and women religious.

SBA rules “prohibit loans to applicants in bankruptcy,” said AP, which added that “perhaps nothing illustrates the church’s aggressive pursuit of funds” more than the lawsuits.

CNS reporter Dennis Sadowski in an April 27 story said the dioceses that sued argued that the initial interim rules governing the Paycheck Protection Program did not exclude any entity in bankruptcy proceedings, but that the application form released later led to their disqualification. The lawsuits sought to block the bankruptcy provision, claiming it was unlawful.

As CNS reported, the dioceses explained in their filings that financial challenges caused by the COVID-19 pandemic could not have been foreseen. They said their primary source of income was from revenue derived from monthly parish collections, which have seen a dramatic decline because public Masses were not allowed to be celebrated for weeks.

While some COVID-19 restrictions have been eased around the country, many churches remain closed for public Masses or must severely limit the size of their congregations.

Among dioceses that applied for a Paycheck Protection Program loan was the Diocese of Tulsa, Oklahoma. A July 8 diocesan statement said that starting March 20, Tulsa Bishop David A. Konderla suspended the celebration of public Masses at least through May 23, making the decision “in consultation with health officials and in seeking to serve the common good of the community.”

In addition, the diocesan elementary schools ended the semester early “and all diocesan activities were suspended until further notice.”

“Without the public Mass, the weekly collection of donations, the ‘offertory,’ plummeted,” the diocese said. “Given the effect of the decline in offertory on the local budgets, the chancery — the main administrative body of the diocese — started to provide pastors and principals with guidelines on how to implement dramatic decreases in personnel.”

The diocese applied for a loan on “on behalf of the hundreds of diocesan employees spread across eastern Oklahoma.”

“I am thankful that religious nonprofits, like the Diocese of Tulsa, were allowed to apply for these critical funds that allowed us to care for our employees and their families,” the bishop said. “We believe taking advantage of the opportunity offered to us allowed us to be good stewards of all that is entrusted to us without having to jeopardize our Catholic identity.”

Bishop Konderla added: “As we pray earnestly for the end to this worldwide pandemic, the diocese, on behalf of all its employees and persons it serves, extends its gratitude toward those who donate toward the cause of Christ in eastern Oklahoma.”

While “some people may react with surprise that government funding helped support faith-based schools, parishes and dioceses,” Bishop Lawrence T. Persico of Erie, Pennsylvania, told AP, “the separation of Church and state does not mean that those motivated by their faith have no place in the public square.”