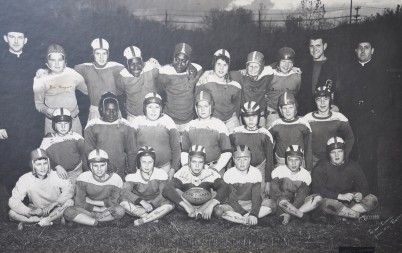 In the spring of 2011, the Catholic Youth League (CYO) lost a longtime friend and well-respected football coach, Robert Joseph Houser. Coach Houser died at the age of 80.

The coach donated over 35 of his years on the sidelines at St. Peter and Most Precious Blood parishes, with the bulk of his years at Queen of Angels, and touched countless young men’s lives while winning ballgames.

Houser attended Most Precious Blood School and St. Charles Seminary, then played football for the St. Joseph Athletic Club. He was employed by Schenkel and Sons before starting his own company, Robert J. Houser and Son Contractors, which he owned for 50 years.
Houser was a member of Queen of Angels Parish where his family made their home in the shadows of the church property. He was active in the Queen of Angels Choir and both the Bishop Dwenger and Central Catholic Booster Clubs. Houser also spent countless hours volunteering at St. Joseph Hospital and with the Knights of Columbus.

Most recently, he and his wife Mary, had made St. Michael’s in Waterloo their home parish after retiring to the lake in 1997. In addition to his wife of 60 years, Houser is survived by his six children 13 grandchildren and five great-grandchildren.

Son, Joe, recalls being the water boy for his father’s teams long before being old enough to play the game. When it was his time, the linebacker/fullback chuckled remembering, “Dad was always a little tougher on us boys, careful not to show any favoritism.
“Dad was very passionate about the game of football. After our games on Sundays we would come home and watch more games on the black and white,” he continued.

Joe and his brother John, both went on after their Queen of Angel days to play for Bishop Dwenger High School and John continued his sports career at Wabash College.

Tom Topp, who played quarterback for Houser from 1968-1971 at Queen of Angels described his former mentor as a good motivator and well-respected coach.

“Mr. Houser always had a sense of humor in his message. I thought the world of him and can not say enough about him,” Topp said.

As an adult, Topp kept in touch with Houser and spread the word of his death to fellow teammates across the country. “We all agreed what an influential role model Coach Houser was growing up and what a privilege it was to play for him,” Topp summarized.

Also on Topp’s team that lost to St. Andrew/St. Peter in the city championship game their seventh-grade year was halfback/lineman, Tim Murphy. Like Topp, Murphy agreed that Coach Houser was a fun-loving guy.

“He liked to joke around.  We had a lot of fun, but always worked hard,” said Murphy. In 1969, Murphy’s family moved just a couple of blocks from the Housers. Shortly after, Murphy’s father passed away. Murphy recalled, “Mr. Houser took me under his wing and has always been like a father-figure to me.”

“When my wife and I got married and lived in our first home we had him do work in our driveway,” Murphy added.

Over the years, special people have made the CYO what it is today. Bob Houser was certainly one who shaped and molded youth sports with his time and dedication to athletics and young people.