It goes without saying that Marian High School’s co-salutatorians, Victoria Tellez and Elizabeth Rhee, are excellent scholars. Their English teacher Jane Wageman notes, “They are both thoughtful students who engage well in class discussion and think deeply about the literature we read. Both are well-respected by their peers.”

Their AP physics teacher, Rebekah Randall, adds, “Both students are in high demand as lab partners because they work so well with others on top of having an understanding of the material. They are often found studying with their classmates and providing words of encouragement.” 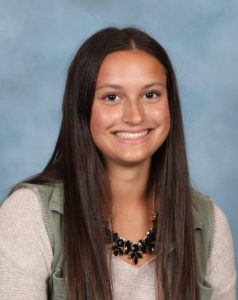 During her junior year, Victoria was part of the Science Research Team, conducting an experiment about the role of the gene sestrin 2 in ovarian cancer.

The third of five children, Victoria is looking forward to a trip to Europe this summer with her older sisters, one a pediatric oncology nurse and the other studying actuary science. She also has two younger brothers.

The Tellez family belongs to St. Jude Church, South Bend, where Victoria attended grade school. She said, “Faith has been very central in my life ever since I was young. Both my parents are Catholic and have raised my siblings and me in the faith. We continue to attend church every Sunday morning. Going to Marian has greatly contributed to my faith life, teaching me that there is more to being Catholic than just going to church and doing the right thing. Marian has provided me with a community that encourages me to live out my faith in everything I do.”

At St. Jude, she teaches Sunday school for pre-K and kindergarten students. “Even though I am the teacher, the kids have taught me a lot more about life and God’s love than I would have ever thought.”

Victoria hasn’t made her final decision about college, but plans to study neuropsychology and Spanish before going to med school. Chemistry was her favorite class at Marian, but she also loved world history and Spanish, consistent with her Mexican ancestry. Besides being Co-President of the Spanish club, she’s been part of the Service Leadership Council, organizing service events like volunteering at the Food Bank of Northern Indiana.

She’s also been a varsity soccer player all four years, thrilled that her team went to state this fall. “The Marian soccer team gave me another family of lifelong friends and taught me the importance of hard work.” 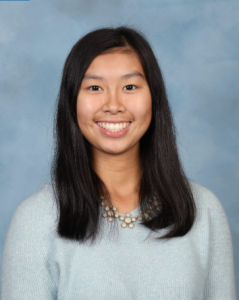 Elizabeth is also grateful she decided to enroll at Marian after attending Stanley Clark School. In fact, she serves as an ambassador, giving school tours to prospective students. Besides its academic reputation, she was attracted to the art program at Marian and hopes to take more art classes at the University of Notre Dame, though engineering is her intended major. She’s been involved with the annual Spirit Night at Marian, designing and painting murals as its art captain.

Randall said, “Elizabeth has been in my homeroom since she was in ninth-grade, and I have seen her blossom into a wonderful leader. She is kind and helpful, always willing to lend a hand when I needed help setting up a lab or straightening in the room.”

Elizabeth has participated in plays as part of both crew and ensemble. She not only played tennis, but has also given lessons to children with special needs through Buddy-Up Tennis. Through the Vincentians service club, she’s helped collect food, write letters to shut-ins and made blankets to go with the beds the St. Vincent de Paul Society gives out through its Sweet Dreams program. For her, the National Honor Society has been more than an item on her resume; as Co-Vice President, she’s promoted volunteering and tutoring within the school’s chapter.

Although Elizabeth is not Catholic, Marian has introduced her to God and the Catholic faith, helping her to understand it better. “Marian has also helped me become more active in service. The various service requirements allowed me to fully see and experience the positive impact of serving those in the community who need help. I intend to continue to do more in the future. The focus on being supportive of those in the community was another facet of faith Marian emphasized, which helped me have the courage to step into the community more.”