The following is the homily preached by Bishop Rhoades at St. Joseph Parish in Mishawaka on Nov. 25th, the Solemnity of Our Lord Jesus Christ, King of the Universe:

On this last Sunday of the liturgical year, the Church celebrates this Solemnity of Our Lord Jesus Christ, King of the Universe. In the prophecy from the Book of Daniel, we heard about the Son of Man coming on the clouds of heaven. We heard that “His dominion is an everlasting dominion that shall not be taken away” and that “His kingship shall not be destroyed.” As Christians, we recognize this prophecy as referring to Our Lord’s Second Coming in glory, when His kingship will be fulfilled.

In the second reading from the book of Revelation, we also heard a reference to the kingship of Christ since it refers to Jesus as “ruler of the kings of the earth.” 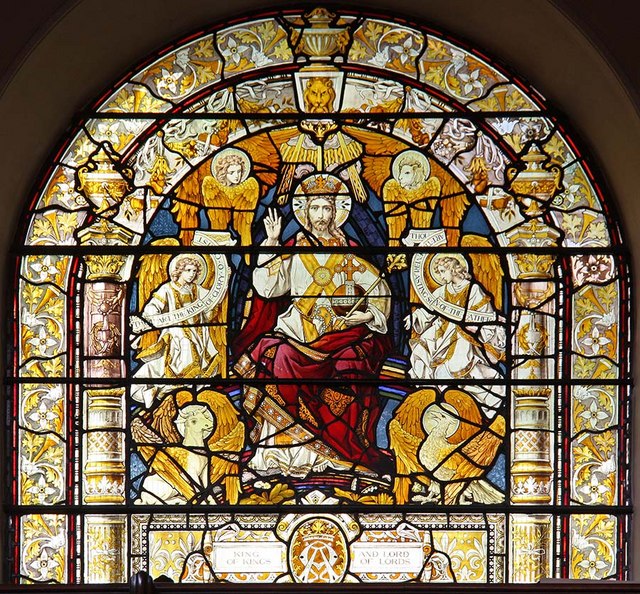 In the Gospel, we learn even more about the kingship of Jesus. We heard St. John’s account of the trial of Jesus before Pontius Pilate, the Roman governor. Jesus was standing before this earthly ruler, accused by the religious leaders of treason, of claiming to be king of the Jews. This was a very serious charge: sedition, rebellion against Rome, a crime that was punishable by death. So naturally, Pilate asks Jesus during the interrogation: “Are you the king of the Jews?” Our Lord explains that His kingdom does not belong to this world. This was a puzzling answer. Jesus admits that He is a king and that He has a kingdom. But it is not of this world. Our Lord teaches the complete otherness of His kingdom. He told Pontius Pilate that if His kingdom did belong to this world, His attendants would be fighting to keep him from being handed over to the Jews. But no one was fighting for Him or battling for His kingship.

Jesus had no military power. He had no political power. He had no armies. There was no threat to Rome. Pilate probably had no idea what Jesus was talking about — a kingdom not of this world. It probably sounded crazy to him. He didn’t know what to make of Jesus’ words. The question for us is: “what do we make of it?” How do we see Jesus as King and what does His kingdom mean to us? How often we pray in the Our Father, “Thy kingdom come.” What are we praying for? What is our faith and intention when we pray these words, “Thy kingdom come?”

Our Lord’s other words to Pilate in today’s Gospel shed some light on these questions. When Pilate asked Jesus further on, “then you are a king?” Jesus answered with these words: “You say I am a king. For this I was born and for this I came into the world, to testify to the truth. Everyone who belongs to the truth listens to my voice.” So Jesus the King came to witness to the truth. His kingdom, therefore, is a kingdom of truth. This is the essence of His kingship. Elsewhere, Jesus identifies Himself as the Way, the Truth and the Life. The Son of God entered the world and history as our Savior, as the truth that sets us free. He revealed to us the truth about God and about humanity. Sin and evil can enslave us. We are tempted by the devil, the father of lies. Jesus comes to rescue us, to free us, to liberate us. His kingship is centered on truth, the truth of God and His love.

Our King is victorious in the battle for our liberation from the slavery of sin and the reign of death. But how does He do it? How does He reign as King? Kingship is always connected with power. In fact, dominion demands power. Jesus speaks of His mission as king as testifying to the truth. This truth of Jesus, the truth that sets us free, is outwardly powerless in the world. Christ the King was powerless according to the standards of the world. But it is in this powerlessness that He is powerful. It’s in weakness, stripped naked and hanging on the cross, that Christ the King reigns.

God’s love is victorious. It conquers the enemy — Satan, sin, evil and death. This is the revolution of Christ the King and of Christianity. Real power is the strength to love. Real life is found only in dying to self. Christ the King turns the values of the world upside down. He proclaims a new and radical form of kingship. He inaugurates a new kingdom, a kingdom not of this world. It is a kingdom of truth and love.

Let’s get back to that question: “What do we mean when we pray “Thy Kingdom come?” And let me add this question: “do we live as loyal subjects of Christ the King?” To be His loyal subjects means that we accept His truth and bear witness to it. In the spiritual battle of life, we are to be on the side of truth, the truth of the Gospel, even if it’s unpopular.

We are part of Christ’s Kingdom that is not of this world. Do we live that way?  In the Our Father, immediately after praying “Thy Kingdom come,” we say: “Thy will be done on earth as it is in heaven.” Do we truly seek to conform our will to the will of our King? Does Christ reign or rule in our lives, or do other things or people rule in our lives? When we pray, “Thy kingdom come,” do we mean it? We’re saying to God that we want Him to rule in our lives and we want His truth and love to rule us.

Today’s Solemnity of Christ the King reminds us of what should have priority in our lives: God and His will, His Kingdom — not any earthly nation, political party, or government. Sometimes I fear too many Christians receive their formation more from the secular media, blogs, and social media postings than they do from the Gospel and Christ’s Church. The most important and fundamental law in the Kingdom of Christ is this: “Love one another as I have loved you.” If we are loyal subjects of Christ the King and faithful citizens of His Kingdom, we seek to care for one another, to defend the poor and the weak, the unborn and the refugee, the sick and the suffering.

My brothers and sisters, as we prepare for the season of Advent and to celebrate the Birth of our King, let us reflect on our citizenship in His Kingdom. Nothing should take precedence over following and serving Christ our King and to extending His kingdom of truth and life, of holiness and grace, of justice, love and peace.