From Zimbabwe, where churches are closed and data costs make attending Mass online prohibitively expensive for most Catholics, to Australia, where churchgoers successfully petitioned authorities to allow places of worship the same number of people as bars, churches are reopening cautiously amid widespread controversy.

Across the world, churches are trying to balance observing religious freedom with protecting people’s health.

“Some people feel churches should be opened” in Zimbabwe, which is under a strict lockdown, said Yvonne Fildah Takawira-Matwaya, who chairs the bishops’ justice and peace commission. “Because data is very expensive, most people are not able to catch live-streaming of Masses,” she said.

Even before the COVID-19 outbreak, Zimbabwe was in economic crisis, and more than half of its 15 million people needed food aid. 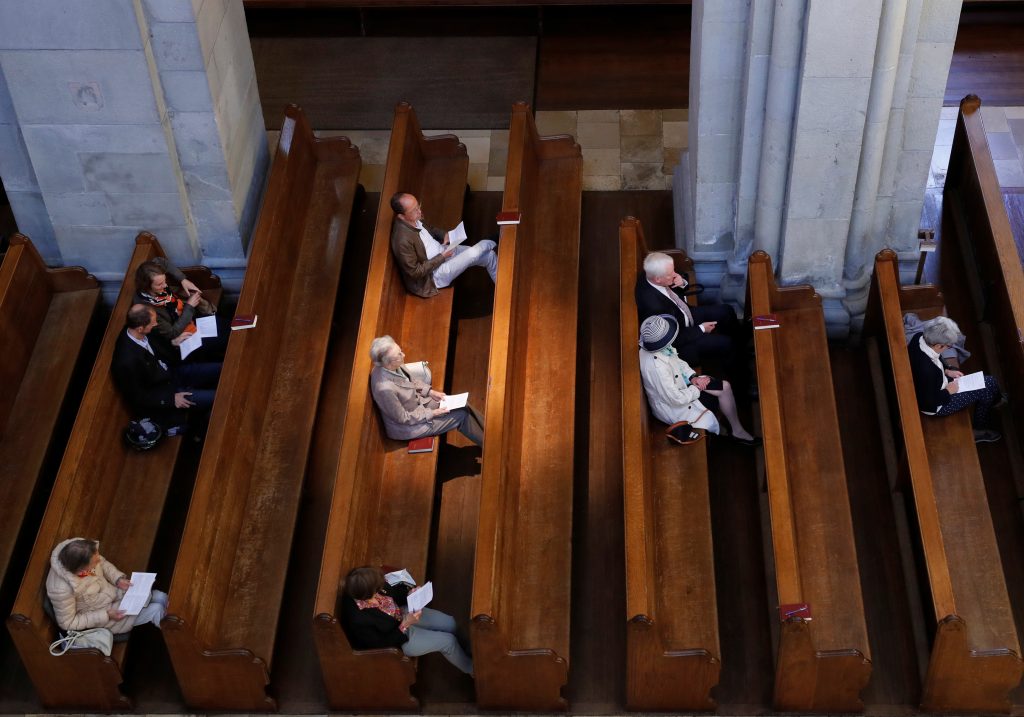 People practice social distancing are seen in the pews at a church in Zurich, Switzerland, May 31, 2020, after the country relaxed restrictions during the COVID-19 pandemic. (CNS photo/Arnd Wiegmanni, Reuters)

In Australia, Archbishop Anthony Fisher of Sydney started a petition urging the state government of New South Wales to allow places of worship the same number of people as bars, and churches received permission to admit up to 50 people at services beginning June 1.

The coronavirus lockdown was necessary but “came at a cost — not only to the economy, but also to the spiritual and mental health of our people,” Archbishop Fisher said.

In the United Kingdom, some bishops have criticized a government policy to place churches in the same high-risk category of public places as pubs, restaurants and theaters, which will not be allowed to reopen until after July 4.

Cardinal Vincent Nichols of Westminster said May 31 it was “time to move to the phased opening of our churches.”

In Switzerland, churches launched a petition to observe the “human right to freedom of religion” as services remained forbidden until early June. In Germany, the bishops’ conference said the widely criticized ban on religious services was necessary, reported the Catholic news agency KNA.

“A church that endangers life and health betrays its own mission,” said Father Hans Langendoerfer, secretary of the German bishops’ conference, noting that “like all freedoms, the freedom of religion is tied to responsibility.”

In Italy and Vatican City, Masses with more than a few worshippers resumed May 18 after a 10-week suspension, but are subject to strict health protocols. 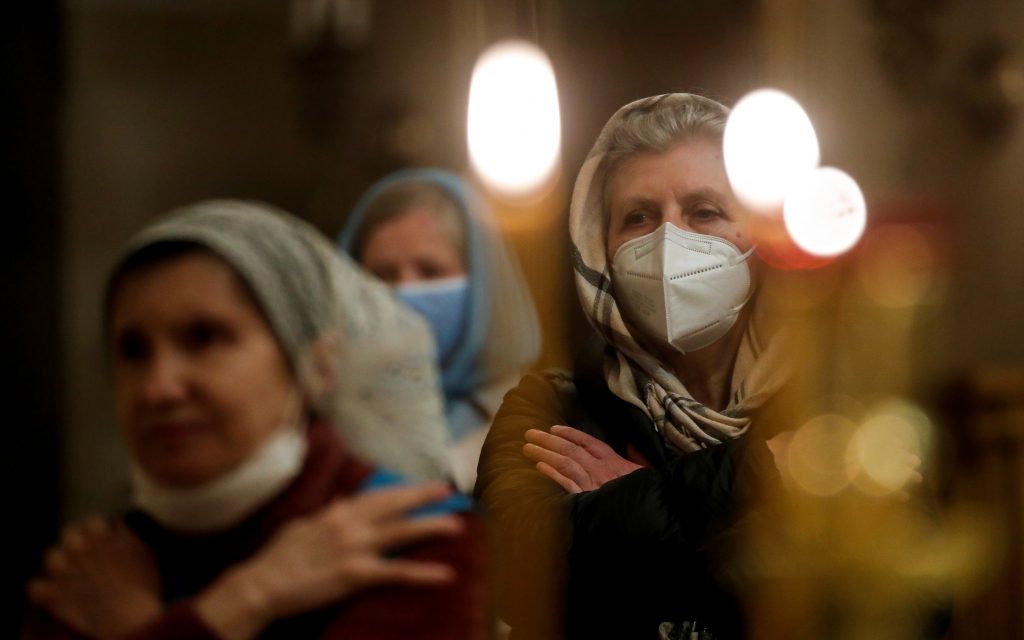 Orthodox Christians pray during a service in the chapel of the Cathedral of Christ the Savior in Moscow June 2, 2020, as the country relaxes restrictions during the COIVID-19 pandemic. (CNS photo/Maxim Shemetov, Reuters)

Pope Francis celebrated the feast of Pentecost May 31 with a Mass in St. Peter’s Basilica attended by about 50 people. At midday, he greeted hundreds of people wearing masks and respecting social distance in St. Peter’s Square. He greeted the crowd from the papal study window in the Apostolic Palace for the first time since the beginning of March.

Across Europe, most churches have opened with varying restrictions, reported KNA. But in Luxembourg, where most coronavirus restrictions have been relaxed, church services are still suspended.

“I think the government couldn’t care less about us. It disappoints me and makes me angry,” said Cardinal Jean-Claude Hollerich of Luxembourg.

Poland was one of the first European countries to allow public church services to start again, with limited congregations as early as April 20.

People older than 65, those with COVID-19 symptoms and people “with a fear of infection” can continue to stay home, but everyone else should return, Cardinal Kazimierz Nycz of Warsaw said as a dispensation allowing Catholics to stay away from Mass was canceled May 29.

In Hungary, Cardinal Peter Erdo of Esztergom-Budapest urged Catholics to “embark on their mission with a new impetus” when he reopened the Esztergom basilica May 31. Hungary reopened its borders with Serbia, Slovakia, Romania, Slovenia and Austria at the end of May.

In the German city of Frankfurt, health authorities urged churches to register the names of all who attend services after more than 100 COVID-19 infections were linked to a Baptist service where contact tracing proved difficult.

In Canada, it could be a year or longer before churches start welcoming large numbers of parishioners.

Edmonton Archbishop Richard Smith said there is no “normal” lurking around the corner for churches, and it may take the development of a vaccine before a return to full public Masses.

“I want that to happen as soon as anybody wants it to happen. I just miss being with the people, being able to celebrate fully, worthily and joyfully, the way that we’re accustomed to,” Archbishop Smith said. “But these are the circumstances. We just have to accompany this with prayer.”

While Ontario churches remain closed to the public, they are discussing how they will reopen — particularly the size of congregations — when the time comes, said Neil MacCarthy, a spokesman for the Archdiocese of Toronto, noting that there is not a one-size-fits-all solution. Until then, “our priority should be love of neighbor, to take care of one another,” he said.

While churches in the Archdiocese of Vancouver are allowed to celebrate public Masses again, the limit on congregations of 50 people means most Catholics are still connecting through video. Some parishes have facilitated groups for young adults and daily rosary prayer through video.

In the Caribbean, the Diocese of St. George’s in Grenada resumed public Masses in late May.

Bishop Clyde Harvey said he was “very proud” of how the churches were implementing safety rules. “In Grenada, a congregation is not a congregation of faceless people; although people have on masks, you recognize them behind the mask,” he said, according to the Trinidad-based Catholic News.

Masks combined with social distancing “is a bit uncanny, but you get used to it,” Bishop Harvey said.

In the East African country of Tanzania, churches never shut, and thousands of people have been attending Masses across the country. Unlike neighboring Rwanda and Uganda, which imposed strict lockdowns, Tanzanian President John Pombe Magufuli said churches and mosques needed to remain open as a spiritual refuge during the pandemic.

In South Africa, the Jesuit Institute criticized the government for allowing churches to open with a limit of 50 people, while the bishops’ conference welcomed the move as the country’s lockdown restrictions loosened June 1.

“While a ban on friend and family visits remains in place, it seems illogical that people can gather in places of worship,” the Jesuits said. There is a difference between opening up businesses “for economic survival, particularly as people start to starve, and opening institutions that could function differently in these times,” it said. But the bishops said “a sense of deep depression due to spiritual longing is also a suffering and a disease.”

In Kenya, churches will open as soon as lockdown restrictions are relaxed, Bishop Dominic Kimengich of Eldoret told Catholic News Service after the bishops met with government officials.

In Ghana, Masses may not exceed one hour and no more than 100 people may attend when churches reopen June 5. Masks must be worn and registers taken.

The situation in mainland China remains unknown. The bishops’ conference and the Chinese Catholic Patriotic Association jointly announced an extension to the suspension of all church activities in late April as other public gatherings and venues began opening. As well as Masses, this also put a stop to traditional Marian pilgrimages throughout May.

In the Philippines, Asia’s most Catholic nation, churches began reopening in late April with restricted numbers and no hymn singing.

Contributing to the report were Michael Sainsbury in Australia; Simon Caldwell in England; Jonathan Luxmoore in Poland; Fredrick Nzwili in Kenya; Damian Avevor in Ghana; Mickey Conlon and Agnieszka Ruck in Canada.